Andrew S. Allen and Jason Sondhi on the Relaunch of Short of the Week 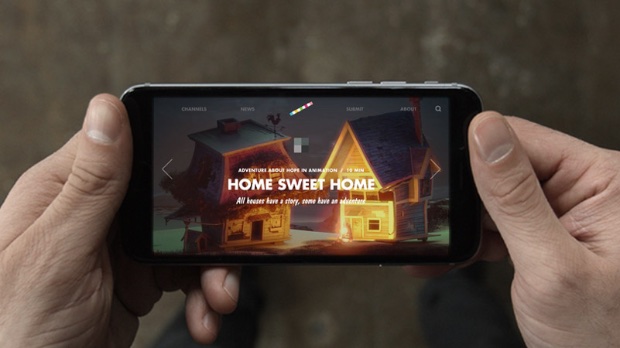 by Scott Macaulay
in Distribution, Filmmaking
on Feb 19, 2015

“A new way to watch films” is what the venerable platform for short films, Short of the Week, promises in its freshly relaunched edition, online now. Founders Andrew S. Allen and Jason Sondhi have done a top-to-bottom redesign — a clean look that also makes both searching and streaming easier. Indeed, the new Short of the Week acknowledges that a viewer today is as likely to watch a short on a large phone or streamed through a device like Chromecast to a television as on a laptop window.

Filmmaker readers should recognize both Allen and Sondhi’s names as the two were selected as 25 New Faces of 2011. At the time, the two had collaborated on a well-received short film, The Thomas Beale Cipher, while they had this other little project — Short of the Week. “There’s a disconnect between the old filmmaking world and online distribution,” Allen said then. “We’re helping bridge that gap.” Indeed, Short of the Week has, with its selections guaranteeing filmmakers tens if not hundreds of thousands of views.

In recent years, Allen and Sondhi have developed other skill sets. Allen is a parter in the design firm FiftyThree, whose Paper has been cited by Apple as one of the best apps of the year. Sondhi, meanwhile, has become a staff curator at Vimeo. It’s impressive, then, that both are able to renew their commitment to Short of the Week with what is truly an impressive relaunch. (If you don’t believe me, check it out here.)

Below, I ask the two about the goals for the site going forward, whether shorts can be easily monetized, and how filmmakers should think about online platforms.

Filmmaker: How do you see the short film space as having changed since the launch of Short of the Week, and how is the new site’s iteration intended to respond to those changes?

Jason Sondhi: The biggest change I’ve seen is that short form on the web has become a goal in and of itself, rather than a last stage of a work’s lifespan. We’re seeing a lot more work being produced directly for the web, even among more traditional “film festival” directors. Most agents we talk to have dedicated assistants for web scouting, and there is a growing awareness among filmmakers that success on the web is a very direct way to take a step up in your career. You have a hit on Short of the Week and you’re fielding industry calls the next day.

Furthermore as more viewers matriculate to the web (or as more business people recognize that viewers have already moved) the increased influence of brands in commissioning work, and of noted tech and publishing brands in acquiring work, has expanded the opportunity for short filmmakers to get paid in ways that were not previously possible. A lot of it has to do with the rise of video advertising and the comparable collapse of display ads, but it feels like everyone is in a rush to establish their video bona fides right now.

What this meant for us when redesigning the site is that there is a maturity to both the content and the audience that we’re uniquely situated to take advantage of. Viewing habits have shifted—rather than appealing to film lovers who stumble upon a recommendation of ours and realize that “hey, shorts are cool too!”, we’ve got an audience who has an established taste for our films because they are short rather than in spite of that fact. With the increase in really solid work produced for the web, we have the supply to curate more frequently, and an audience hungry for that. What we needed to do is optimize the delivery, and we hope this redesign accomplishes that.

Filmmaker: In terms of new audiences for short films, what have you learned from your years of doing Short of the Week? And what’s the most unexpected connection you’ve made in terms of connecting your material with an audience?

Sondhi: I’ll defer to Andrew on this, but a really funny anecdote is that we have “channels” which are categories split up by form, genre and subject. Our “sexuality” channel is by far our most popular, and we have films featured there that we’ve driven hundreds of thousands of views to. I mean sex on the internet? Who knew?

Andrew Allen: We’ve been continually surprised at just how many people come to the site having never watched a single short film in their life, and come away our biggest fans. For the past century, the film industry and the festival world have framed shorts as a small niche for filmmakers. It hasn’t been until now that they’ve been accessible to anyone outside the festival circuit. We’ve come to learn that shorts are much more universal and can speak to people of all cultures and ages. It turns out it was never a problem of content, but a problem of access. 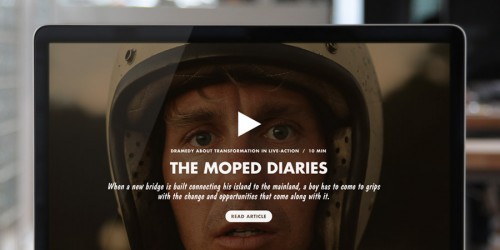 Filmmaker: Andrew, after you appeared as a short filmmaker in Filmmaker‘s 25 New Faces list, you went to work at FiftyThree and developed Paper. How has your time spent in the technology world informed your filmmaking? What skills or knowledge are you bringing to the Short of the Week relaunch that you wouldn’t have if you didn’t have your FiftyThree experience?

Allen: It’s probably no surprise, but I draw a lot of inspiration for the work we do at FiftyThree from my love of filmmaking and the incredible work coming from short filmmakers around the world. It’s a big reason why we started Short of the Week eight years ago — to discover new voices trying new things that inspire others. And not just other filmmakers, but audiences around the world. Short films are really a breeding ground for new ideas, and once they’re unleashed on the web, they have the potential to shape our collective culture.

Playing in both the tech and film worlds also provides a sense of perspective. The tech world moves very quickly and is always looking ahead. By contrast, the traditional film industry moves slowly and spends a lot of time looking backwards. But it shouldn’t be this way! Filmmaking has always been rooted in technological advancement since the early days of filmmaking. We often write about the changes in the film industry from the growing popularity of online distribution to new formats like interactive films. When you embrace the change that comes with new technology, these are opportunities. When you don’t, these all look like threats. We see the opportunity.

Filmmaker: Jason, similarly, how are you balancing your work with Vimeo and SotW? Is there a formal relationship between the two? How has knowledge gained from Vimeo informed SotW?

Sondhi: It’s been a great experience to work on both simultaneously, what’s lovely is how well they complement each other—at their core, both roles rely on knowing the short film space intimately and watching a lot. I spend less time on Short of the Week than I did before Vimeo, but the work I do there informs my knowledge for Short of the Week.

It’s hard to split apart the two experiences since I came aboard at Vimeo right when Short of the Week was really starting to take off, but the biggest evolution for me in the last three years is simply access. Rather the critic from the outside, I’m now working and communicating daily with filmmakers and industry from the inside (albeit from the web, which is still “outside” to many traditional businesses) and that has influenced and shaped my thinking in innumerable ways. My goal for 2015 is to write more thinkpieces and share these insights with readers.

Filmmaker: What advice would you give a short filmmaker today that’s different than advice you would have given at the launch of Short of the Week?

I don’t know if I would’ve had any advice for filmmakers when we started out! Really the whole pitch at the time was, “your festival run is over, you’ve got this great film that now no one will ever see, why not put it online and let people enjoy it?”.

Sondhi: Nowadays there is a lot of information we’re able to share about launching your film online for maximum impact, plus related ideas surrounding building your filmmaker brand online. A lot of the same stuff that filmmakers in the indie feature space are exploring in fact—building an audience, capturing fan data, crowdfunding, etc. We find that short filmmakers in general are, as a whole, behind the curve on these concepts and are losing pace to digital natives on platforms like Vine, which is a definite shame.

Allen: Learn how to tell a story to an online audience. It amazes me how many film schools we’ve been to and instructors we’ve spoken to who are still teaching filmmaking as though it’s the 1970s. The format is changing, the platforms are changing, the audience is changing. Those who understand this have the potential to make a big impact.

Filmmaker: The relaunch of Short of the Week has a heavy mobile component, and it appears as if the site is built using responsive design. I assume this priority came out of analytics. What have you learned about the way people are consuming short form content on different platforms? And should filmmakers be thinking about mobile consumption when they shoot their own films these days?

Allen: Mobile will become the dominant platform for viewing online videos in 2015. And for good reason—your phone is always with you. Some might scoff at the though of such a small screen, but remember, the phone is just the source. There are more solutions popping up every month that allow you to stream content from your phone to a nearby screen.

It’s not as apparent as our mobile views, but the new site is also built with the TV in mind. You can sit back and stream films to your big screen TV at home using something like Chromecast and get a full-screen browser-less experience that feels native to the TV.

By the way, if you’re a filmmaker and you’re not sure what it means to shoot a film for the phone, take a read through our article, Know Your Medium.

Filmmaker: How will Short of the Week help filmmakers monetize their films?

Sondhi: Right now we still rely on the idea that exposure will help your career. On the one hand, that’s never been a more credible promise—we’re truly seeing the effects every week. On the other hand, the more legitimate short content becomes online the more illegitimate the current arrangement becomes.

Shorts will always have issues, mostly surrounding supply, but it’s odd—while features are seeing the old world order of windowing collapse into an innovative free for all, I think windowing (which has largely been absent from the world of shorts) could be an intriguing answer. I won’t expound more than that, it’s still sort of an immature idea in my head, and there are some technological advances that need happen first, but I’m confident the needed tech will come, and then…we’ll see.

Filmmaker: And, finally, what’s going on with your own filmmaking? Have your day jobs and SotW crowded it out, or are you developing new projects?

Sondhi: Nada. Andrew and I would team up every few months to do a video for FiftyThree, but that’s the sad extent of it. Simply no time, it’s hard to serve more than two masters, SotW, day job…three if you count my girlfriend!

I’d like to get back at it, and, of course, the irony is that I’ve never been more well situated to do so than now, what with all the wonderfully talented folk I’ve gotten the pleasure to know through Short of the Week.