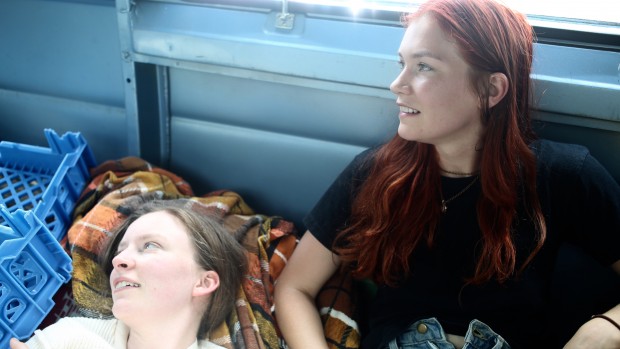 Filmmaker‘s Taylor Hess recently attended and reported on the U.S. in Progress series at the Champs-Élysées Film Festival. While there, she spoke to a number of female directors, producers and actresses. Below, her conversation with Hannah Gross and Deragh Campbell, who both appear in Nathan Silver’s Stinking Heaven.

Filmmaker: I Used To be Darker was your first film together, and Deragh, your first time acting?

Campbell: Right, I’m not trained. My college degree is in writing and my background is publishing and writing. In a lot of ways I look at acting as another way of interacting with material and collaborating or supporting interesting material. The reason Hannah and I were first attracted to the director, Matt [Porterfield], was because of Putty Hill, for the content and the sincerity of the film. As an actor, I feel like I can lend myself in different ways to different projects. I have a lot to learn, but actors who have had training still feel like there’s a lot to learn.

Filmmaker: Do you see a difference between Hannah’s approach to acting because she studied it in school?

Campbell: I see that Hannah has more calm than I do. I just feel like I’m flailing.

Filmmaker: Hannah, do you feel like you are flailing?

Gross: Oh, yeah! If anything, my four-year education at NYU was just practice. I guess there’s a layer of comfort built into years of practice, but I feel as though I still haven’t figured out a way to translate what we learned in school to working in film. I still feel on any film project that I’m working instinctually, that my approach is very reactionary.

Filmmaker: How often do you come across scripts with characters that excite you?

Filmmaker: How comfortable are you turning things down?

Gross: I definitely feel more comfortable now turning down parts or auditions. Maybe I’m not in a place to be selective, but I don’t want to waste my time or someone else’s time.

Campbell: I think there’s a mentality that actors have to do things they don’t want to do to get to a place of more power. But I work on projects I’m attracted to because this is the only thing that makes sense to me, and I think as a result, this makes me more attractive to projects I might be interested in.

Filmmaker: Does more power for an actor come from bigger, more commercial projects?

Campbell: There’s this thing now where people seem very comfortable living ironically about “selling out” and it being a joke that they’re in on.

Filmmaker: Do you think it has to do with wanting fame and recognition, but being unwilling to admit it?

Campbell: I actually think it could be really fun to do something totally immersive, like pretending to fight a dragon.

Gross: In a big studio picture?

Campbell: I could actually see you really getting into that Hannah! Or being really good at it!

Gross: I think I’d be awful!

Filmmaker: You’d be at the mercy of acting alone with a green screen.

Gross: Yeah, but there’s never anything solitary about acting. Choosing to be an actor means choosing to be entirely dependent on other people.

Campbell: It’s hard to have a practice as an actor, like hard to exercise yourself creatively unless you are working on a project.

Filmmaker: Do you work on your own projects?

Gross: Yeah, we are both writing and doing our own projects. I wasn’t necessarily interested in making narrative projects even though that’s what I’ve been doing the past three years. Lately, I’ve been writing and thinking about pieces for theater, which I don’t know what will happen, and I feel even less sure about how to put up a play, but it feels nice to have my own separate practice.

Filmmaker: What do you hate about acting?

Filmmaker: I think having that kind of control or precision as an actor is a unique kind of skill entirely.

Gross: I think so too. And for my personal taste, I find it less interesting to watch. I like watching someone who is vulnerable to everything. For me, that’s the only hope to improving as an actor— learning how to become more vulnerable.

Filmmaker: What does being vulnerable mean?

Gross: I think it’s being comfortable to come off a scene and feel a level of comfort in letting it go. It’s when I may not know what happened, but at least I was open and present.

Filmmaker: Hannah, what do you hate about acting?

Gross: I hate that it’s a business. That this word is reiterated over and over and that it’s a game of selling yourself or hiring people to sell you. I think the corporate aspect lends in part to the misogyny of the industry.

Filmmaker: And acting itself?

Gross: The moments that I love acting are so rare — the fleeting moments when you are able to transcend self-consciousness or even self-awareness. That’s what’s great about it, as everyone who does this knows. But so much more often, I feel stuck in a place of incredible insecurity, feeling detrimentally self-conscious. Acting brings out a part of the ego that is very unhealthy.

Filmmaker: Can you watch your performances?

Gross:No, it gives me a panic attack.

Campbell: I’m good at detaching actually. I think of it as watching a weird alien.

Filmmaker: How much of Stinking Heaven was improvised?

Filmmaker: How much did you rehearse?

Gross: Not at all.

Filmmaker: The prep was all character building?

Gross: Yes, which we did in pretty much isolation from each other. The fact that we didn’t have rehearsal time is what’s most unfortunate about making these small indie budget films because it all comes down to the economy. Nathan [Silver] first approached Deragh and Keith [Poulson] at the genesis of the project, and they began to create the characters and story together, and then I came on board after.

Campbell: There was about a year of writing and preparing the character, like making video diaries leading up to the shoot.

Filmmaker: Looking back, what was great about your experience in Stinking Heaven?

Campbell: I actually haven’t seen it. I want to wait to see it on the big screen. But, it was one of the most female sets I’ve been on, and it would be great if sets were always 50/50. Sometimes you can end up in situations where its eighteen guys to two girls. And who would ever want to be in a room with eighteen guys?