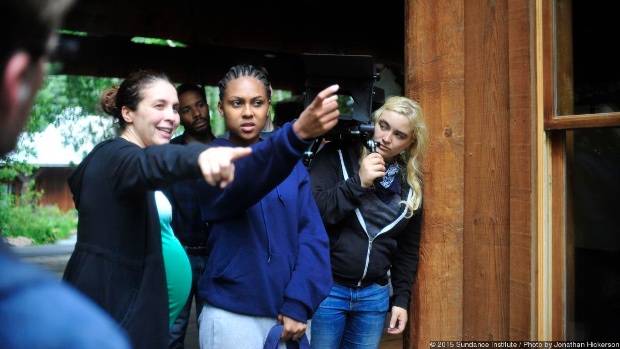 by Livi Newman
in Directing, Festivals & Events, Filmmaking
on Jul 2, 2015

Olivia Newman is at the Sundance Directors Lab with her feature First Match, the tale of “a teenage girl from Brooklyn’s Brownsville neighborhood [who] decides that joining the all-boys high school wrestling team is the only way back to her estranged father.” She is also eight months pregnant. Below, she writes about shooting sex scenes. Read Part One of her Sundance Diary here.

“Shoot every scene like a sex scene and you’ll be wildly successful.” That’s what James Mangold said to me. I was sitting in a circle with the Week Three Creative Advisors who had all just watched the very last scene I shot during the month-long Directors Lab. In it, my main character, Mo, a fifteen year-old girl from central Brooklyn, ends up sleeping with her good friend on the wrestling team. It’s an important emotional turning point for Mo — the first time she’s been intimate with someone she actually cares about.

Before the Directors Lab began, we were encouraged to choose scenes that presented specific creative challenges, or, as Michelle Satter put it, “the ones that keep you up at night.” And this scene was definitely one that scared me. I had only ever shot one sex scene and had covered it in one medium-wide long-take, forcing the viewer to experience the act voyeuristically as it unfolds in real time. But in this scene, I wanted to capture Mo’s experience more subjectively so the viewer could really feel each and every emotional shift as she tests the boundaries of her friendship, resists intimacy, and ultimately allows herself to open up and be vulnerable.

But in the days leading up to shooting the scene, I began to dread the challenge. I’d been on the mountain for three weeks and was so exhausted it sometimes felt like my brain was in sleep mode. Why had I chosen this scene, of all scenes, to do last? Tashi and Demetrius, my two actors, had never even met and I had just one rehearsal day to get them comfortable with each other. And there was wrestling, sex and dialog to cover. Surely I was setting myself up to end the Lab with a big fail. Over lunch, creative advisor Kasi Lemmons reminded me that these two characters were already comfortable with each other physically because of wrestling. “Use the wrestling,” she told me. Too bad neither of my actors were actual wrestlers, I thought.

The night before the rehearsal I couldn’t sleep. I thought about something Robert Redford had asked me one morning after an advisor meeting. “How has being in this setting, surrounded by nature, and so different from the urban environment of your film, affected your creative process?” Nervous, I made a hasty remark about how stripping away the realism of the environment of my film had allowed me to focus on the essence of the scenes. But I could tell from his reaction that I hadn’t found what he was looking for. Fail again.

The morning of our rehearsal, I felt panicked to get Tashi and Demetrius acquainted as quickly as possible so they’d be ready to block the scene after lunch. I decided we should take the chair lift to the top of the mountain. It was a forty-five minute ride up, just enough time to summarize our life stories and become friends before diving into the script. Or so I hoped. But on the way up we got distracted by the scenery and the ground squirrels scampering below, and laughed at Tashi’s tales of battling the “country bugs” she kept finding in her room.

At the top of the mountain we were struck silent by the breathtaking views. A hiker approached us and offered to take our picture. We began posing like old friends, drawn together by the beauty of our surroundings. Then we pulled three chairs together and, overlooking the shimmering Utah Valley, began to read through the script. When we got to the sex scene, we discussed everything beat by beat, kiss by kiss, what each character was confronting emotionally. Then we talked through the details of how I would shoot it, what I would focus on in close-ups, and how much nudity would be necessary.
There was a slightly awkward silence when I finished and just as I was about to fill it with my usual nervous chatter, Tashi flew to her feet. “Come on!” She motioned to Demetrius to face her. She crouched into wrestling stance and began showing him how to hand fight — something she herself had only been taught a few weeks earlier. I watched Tashi and Demetrius circle each other, slapping arms and tugging on the back of each others’ necks, the Wasatch mountains looming behind them. I began to call out suggestions: “You’re trying to get her down. You can tug harder on her neck. Pull on her arm!” And, suddenly, I felt relaxed. Maybe wrestling on top of a mountain was all we really needed to prepare.

Later, during the actual shoot, Tashi and Demetrius asked me to talk them through the blocking of the sex while the cameras rolled. Much like we had done at the top of the mountain, I guided them with directions, learning on the fly what kinds of language to use to keep them emotionally present in the scene without making them self-conscious. In the end, breaking their actions down beat by beat also reinforced the story arc of the sexual act. As James Mangold would so aptly point out later, this is how any scene should be approached. “In fact,” he asked, “why do we even call these ‘sex scenes’? A sex scene is just a scene like any other where something has to happen and change as a result, and that something just happens to be sex. Otherwise, you’re just shooting soft core.”

This is part of the magic of Sundance – learning on the fly, and not always understanding what you have learned or what has led you there until a wise voice whispers it in your ear, or the mountains show you the way.