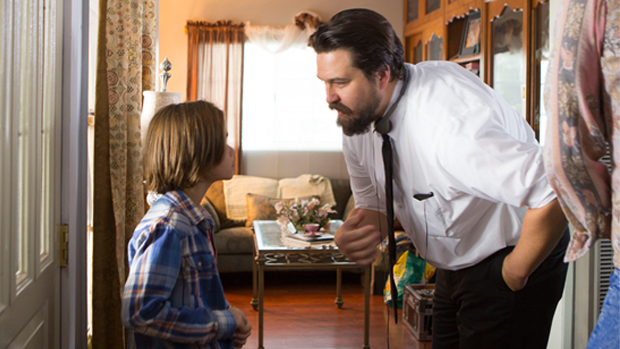 by Michael Curtis Johnson
in Festivals & Events, Filmmaking
on Sep 28, 2015

Sunset. Jamaica, Queens. The final day of IFP Film Week 2015. I’m spending my last night in a hotel watching Pope Francis’ Mass at Madison Square Garden on TV. The plan is to eat one last slice of New York Pizza from Margherita, get on a redeye and “go in peace.”

“Thanks be to God!” Cue the recessional hymn.

But let me take it back to the Introductory Rites. My trip started with the marketing portion of the the IFP Filmmaker Labs. It was great to see the other Narrative Lab participants again and finally get to meet our counterparts from this year’s Documentary Lab.

I was feeling good. Our film, Hunky Dory, is pretty much picture locked and I love it. I was confident we would find an audience and surely premiere at a top film festival next year and possibly, God willing, find a distributor. All they have to do is watch it. They are going to watch it, aren’t they? And who are they exactly?

My faith was quickly shattered just moments after my lead actor/co-writer Tomas Pais and I completed our marketing presentation. Our lab mentors wasted no time tearing into our strategy. I was defensive at first. I tend to get a little flustered when I know I’m wrong.

Our mentors and Lab fellows made us realize that we weren’t effectively conveying what our film is and it doesn’t matter how good your project is if no one is ever interested in watching it. It was a revelation, but now we only had 24 hours to rethink our project pitch for nearly fifty upcoming meetings we had with festival programmers, producers, producer’s reps, sales agents, lit agents and distributors during Film Week.

I’d usually sleep on it, but this is the city that never does. So, Tomas and I went out, drank it up and crisscrossed back-and-froth between bars in different boroughs until the sun came up. We talked it out, had it out and hugged it out. We came to the realization that we shouldn’t keep trying to tell people why they should love our film, we just needed to tell them why we did.

We started most of our meetings at Project Forum by showing a two-minute teaser trailer. So many of the people we met kept stealing glances of Tomas from over the laptop as they watched. I’m sure it was hard for them to believe that the thoughtful, well-groomed gentleman sitting across from them was the one playing the hot mess at the center of our film; his performance is truly transformative. We took something out of every meeting we had, even if it was just a better understanding of what all these industry folks actually do. I made a handful of new contacts and Tomas made dozens of new fans and friends. We collected a stack of business cards taller than the pope’s mitre.

We also had the pleasure of attending a few great panels and special events at Screen Forward throughout the week. The case study on It Follows was incredibly informative and gave me hope that the industry might try some innovative ways to change the distribution model. I wouldn’t bet my life on it, but their reasoning was sound. The “Realizing Your Vision on a Budget” panel was thought-provoking. I have pretty much given up the possibility of shooting on film again, but more power to artists who are still committed to it. I do wonder if they’re a little bit like orthodox Catholics pining for the days when Mass was recited in Latin, though.

On Wednesday, Rooftop Films screened short excerpts from all the Lab projects at Elevated Acre. I was blown away by what I saw of the documentary films in this year’s program. I was inspired by the courage and commitment to their work and I was moved by the empathy they displayed for their subjects. Nanfu Wang’s The Road from Hainan looks compelling and punk rock. Gina Abatemarco’s Kivalina seems timely, yet somehow timeless. The imagery of Katy Grannan’s The Nine is haunting and beautiful. Javid Soriano’s Swing Low features a talented and tortured artist who I believe shares some of the same demons as our fictionalized protagonist. Margaret Byrne’s Raising Bertie appears heartfelt, earnest and important.  I’m sure you’ll be hearing a lot about their projects over the coming year.

Thursday evening, we were treated to a great mutton chop dinner at Keens Steakhouse by one of our executive producers who was in town on business. I have to make a confession: all of our executive producers are family members or friends. They’ve all been so kind to us. In fact, I was being disingenuous last week when I wrote that we “begged” them for funding. They all offered to help us out of the goodness of their heart knowing full well that investing in independent film is practically charity. Our investors are so much more than patrons: they are saints.

Later that night, we met up with our Project Forum participants at the Made in New York Media Center by IFP for a closing night reception. We all kept saying how exhausted we were from the week, but our eyes told a different story. I saw passion. Everyone seemed amped, determined and ready to get back to work. I just think that sometimes it’s hard for us to admit how much we love the struggle because it can seem so fruitless at times. It seems foolish to have so much belief and to be so devoted to this silly little storytelling thing we do.

On our final day, our Lab mentor Rose Troche (Go Fish) offered to meet up with us for brunch to discuss our project. She’s given us greats notes on multiple cuts and has really helped us navigate the these few months of post-production. Anyone who says that everyone in this business is out for themselves has never met Rose. Peace be with you, Rose. You’re the best.

I’d also like to extend my personal thanks to Joana Vicente, Amy Dotson, Milton Tabbot, Zach Mandinach and the rest of the Film Week staff and volunteers for putting together a program that has truly changed my life and lives of so many others. God bless the whole IFP family.

Sunrise over Sunset Boulevard. I’ll have four days to spend some time with my girls before I have to catch a transatlantic flight to Venice for the first phase of the 2015/2016 Biennale College Cinema with my project Savage Youth. Soon, the pontiff and I will both be making our way towards Italy, but for now he’s in the City of Brotherly Love and I’m at home with the angels. Ay man. Amen