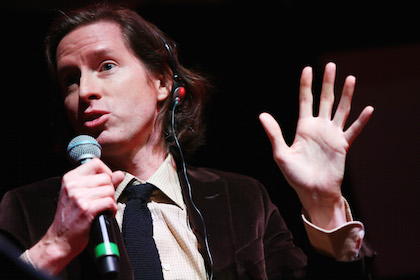 by Ariston Anderson
in Directing, Director Interviews, Filmmaking
on Oct 26, 2015

The Rome Film Festival had a striking fresh look this year under the direction of its new artistic director Antonio Monda. The redesigned fest had a slew of hot films and top-tier tributes. But at the core of the new “festa,” or celebration of cinema, was a series of high-profile conversations with leaders in the arts.

One of the main highlights of the fest was a conversation with Wes Anderson and novelist Donna Tartt in which they discussed their love of Italian films. While Tartt went in depth on her love of Pier Paolo Pasolini’s Medea, Max Ophuls’ Everybody’s Woman, and Paolo Sorrentino’s The Great Beauty, Anderson gushed on his favorite Vittorio De Sica film, The Gold of Naples.

A film he saw only two years ago, which is almost unknown outside of Italy, Anderson has said it is his mission to give it its due, calling it one of the “purest, strongest masterpieces” of the great neorealist master. Anderson felt greatly connected to the disconnected short story-like form of filmmaking and has said it’s a model he’s currently exploring. “It’s a series of little masterpieces,” he said of the film. “I have absolutely no idea why this isn’t seen all over the world all the time but I feel maybe it will be again.”

Fortunately for the audience, Monda opened up the floor for a few questions. Anderson managed to spill miles of wisdom to the young students in the crowd in just a few minutes. We compiled his top gems in the latest in 10 Lessons From Filmmakers Series.

1. Even with source material, find your own story.

With movies you’re often adapting a book. First of all I wouldn’t be surprised if 60% of features are adapted from a book. Books tend to come first. [With The Grand Budapest Hotel], we stole anything we wanted to steal, but we didn’t have permission I guess. It was public domain by then, anyway. But that movie is not actually adapted from any particular Zweig. It’s just many details and sort of ideas are taken from Zweig. That’s sort of my favorite way to approach [adaptations]. When I’m inspired by a book, what I really want to do is try to not exactly adapt it, but to make my own version of that author’s story.

How often do we say the movie was much better than the book? You say that about books you’ve never heard of. But great books are rarely better when they’re reduced to 100 minutes on screen.

2. Whether subtle or striking, find your role model.

Antonioni, the first one I saw, maybe, was L’Avventura. And that was a huge international phenomenon. For me when I was 19 and I had the idea that I wanted to make movies, suddenly you find this Italian director, Fellini — the style [and] his voice [are] as strong as anybody’s in the whole history of cinema. But… it’s a comic voice. It’s such an invention that it [became] less of a surprise when I saw L’Avventura, where [the voice] is so striking and such a break with the tradition of movies before that. My immediate reaction was, I want to be like that. I want to try to do what he’s doing.

Also Blow-Up was great. If you have this idea of yourself as being some sort of artist, there’s this character where [you could say], “I could look like that. I would like to have a Rolls Royce with a camera in the glove compartment and live in this loft and drive around and take pictures.” It’s a good setup.

3. And then find your muse.

I love this movie, [The Great Beauty]. It’s linked to La Dolce Vita. Toni Servillo has such an amazing face with so much emotion. He’s a muse for Sorrentino over many films — more than a muse. The two of them have this sort of spectacular collaboration over all these years. To me when we walked out of the cinema I thought it’s his masterpiece.

I have thought of doing a horror movie, and I have thought of doing a Christmas movie. Horror is an area where if a filmmaker really wants to use all the tricks, the techniques to affect your emotions…. With the kind of movies I do, you’re supposed to say is this part supposed to be funny, or is this part supposed to be sad? Well, you say, I don’t know. I’m not sure. This is the way we wanted it. When you make a horror or a thriller, you say you’re supposed to be scared here. You’re supposed to be relieved here. Here we’re explaining something so you know the next part so you’ll be more scared then. I like the idea of the requirements and the obligations of working in a genre like that. I’ve done some scenes like that, but I’d like to do a scary movie.

5. Genre films are a good way to make bank.

The good thing with a Christmas movie — if you make a great Christmas song or movie or book, as Dickens showed us, you can make a huge fortune, because they come back every year. As long as you have a piece of the action, then it’s a perennial.

We spent all these years just absorbing all these things — reading, watching movies, gathering all the stuff that we wanted to do. So part of it is to not slow down. There’s a tendency when you’re doing your own work, and your own work starts to take over your life, that you don’t read as much, that you don’t watch as much. I don’t read as much. I don’t watch as much. I used to spend all my time doing it. What I try to do [now] is stay with it, keep looking and keep listening. That I think is the biggest thing.

It’s that very rare one that’s self-contained. I feel like most people who keep doing [art] are fans at the same time.

For me a movie, the project usually begins almost always with a character or a group of characters. Usually there’s a sort of world… that’s tied in. But, for instance, the last film that I did, The Grand Budapest Hotel, there was a person we were modeling this role, this character who Ralph Fiennes plays in the film. There’s a real inspiration for him, and he was someone my co-writer Hugo Guinness [and I] were close to. In that case, if we put a style to it, it could be a literary style because of the way he talks. We wanted to write the way he talks to create a character in that way. But in that case it’s really the character that comes first.

Style for me, I’m interested in it in other people’s work, and for myself, I don’t really think about it because I feel like I sort of have things I feel I can’t even escape the way I will do it. Sometimes I’m not even in control of it. So I will just kind of go one thing at a time and kind of build the movie that way.