Bringing People Together in VR: Sakchin Bessette on Moment Factory 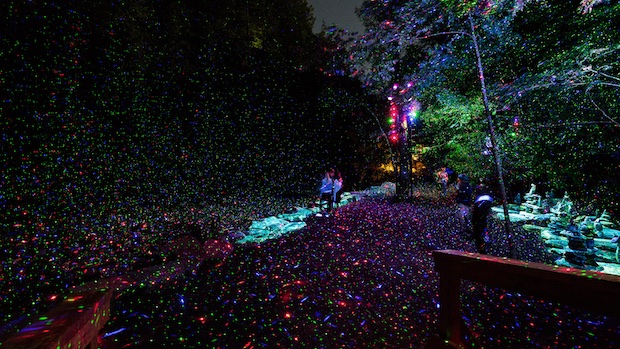 by Lauren Wissot
in Interviews, Transmedia
on Feb 2, 2016

For the past 14 years Montreal’s Moment Factory has been bucking the online trend to create larger-than-life, physical reality (PR?) experiences that force folks to come together in the flesh-and-blood world. With over 300 multimedia projects in wide-ranging locations under their belt — from the LAX international terminal, to the Atlantic City Boardwalk, to Barcelona’s Sagrada Familia cathedral — the studio is still perhaps best known to Americans for designing Madonna’s halftime spectacle at the 2012 Super Bowl. Filmmaker was fortunate enough to speak with co-founder and creative director Sakchin Bessette about the profession of experience designing, and whether the future of new media may be offline as well as on. (And yes, working with Madonna).

Filmmaker: It’s actually pretty refreshing that you’re one of the few new media companies not interested in the VR and Oculus Rift movement. As Sakchin told me when I toured Moment Factory, virtual reality tends to isolate individuals rather than bring them collectively together, which is basically your mandate. Can you discuss why you’re so invested in an offline future?

Bessette: For us it’s not necessarily about being online or offline but about bringing people together physically to share an experience. We use Oculus Rift in the studio as a pre-visualization tool. But as an experience, we think VR tends to isolate people. If we had the opportunity to use VR [and] Oculus Rift to allow people to interact in a virtual world then that could be interesting. But we believe there’s a demand for ways to tell stories with all this new technology in physical environments. We are exploring this field with new kinds of shows, destinations and entertainment.

Humans need to gather physically. From the beginning, people would gather around a campfire to tell stories. We are trying to create entertainment experiences that drive these kinds of basic human interactions. But the experiences themselves need to be strong enough for people to want to leave their home theaters, to go out in public and engage with the world around them.

Filmmaker: Another aspect that was brought up during my tour was the fact that Moment Factory is interested in storytelling with light, which is basically the definition of cinematography. Do you see the immersive experiences you’re creating — such as Forest Lumina, an interactive piece that takes place in a forest outside of Montreal every summer — as 21st century cinematography?

Bessette: I feel light is an amazing phenomenon that is often taken for granted because we live in it all the time. I’m fascinated by how it affects us physically, including our moods and emotions, and how we can use it to create. At Moment Factory, we work across disciplines to tell stories through light, including cinema, exploring new territories through the unconventional blending of approaches and tools.

Forest Lumina has been an inspiring project — working with light and technology in a forest setting to tell a story threaded from local folktales and myths. We are excited about the storytelling potential of multimedia, which has its own unique assets but is in its infancy. The storytelling isn’t linear, for example. We see ourselves as participating in its discovery, though we don’t have all the answers yet. We hope, and we already see lots of interest, that people will jump onboard with us to push the boundaries.

Filmmaker: I’m honored to have been the first journalist invited to see your new space in Montreal. I know you also have an office in LA, which I assume has the same open floor plan, teaming with both computer monitors and human interaction. While there it struck me that unlike most tech companies your end product does not occur online. All development at Moment Factory takes place online only to bring offline. You serve as sort of a bridge back to the real world. Which is much closer to theatrical happenings than it is filmmaking or game development. So what fields do your employees come from?

Bessette: We work equally between the digital and physical. Computers are a terrific tool. But we also design physical spaces that require other technology to immerse people in our worlds. We have a new 2000-square-foot studio to experiment with these technologies, as well as a black box where we can prototype with a scaled model to get a sense of the physical results. There’s a big multidisciplinary team behind it all – from architects to lighting designers, engineers, technical designers, graphic designers, 2D and 3D artists, VFX teams, directors, and writers. And they work within an ecosystem of interdisciplinary projects – rock shows, architectural installations. One week it’s an airport, the next it’s a magical forest. The artists get to work in various contexts with unique needs, and that stretches their ways of thinking. It opens up new ways of solving problems and brings them out of the traditional recipe.

Filmmaker: I’ve long been a fan of the NFB’s transmedia projects, but I had no idea there was such a vibrant artistic tech scene going on in Montreal. I guess the abundance of universities luring international students might account for some of that energy. But, as a Canadian, any theories about why Montreal?

Bessette: The universities, companies like Cirque du Soleil, Ubisoft, and VFX companies have created a mix of disciplines that feed each other. There’s also a lot of exploration in the dance and theater scenes. But I also think it comes from an open-mindedness. Montreal is an island, both geographically and culturally, with our mix of French and English languages. We need to make an effort in order to not feel isolated, to reach out and be open to the world. More than 50 percent of our in-house talent hails from outside Montreal and even Canada, which creates a culturally rich environment that cross-pollinates through collaboration.

Filmmaker: Finally, I can’t end this interview without asking about the Madonna experience. How did you land the Super Bowl commission, and what were the greatest challenges in putting on that show?

Bessette: We have a longstanding friendship and collaboration with Cirque du Soleil. They initially referred us to Madonna, who had reached out to them to help on the Super Bowl. We had some meetings and we hit it off. Madonna trusted us, and from there it went relatively smoothly. It is inspiring to work with someone so hardworking, passionate, and devoted to her art form.

Challenges? The show takes place in the middle of a football game, so orchestrating the setup and takedown of a stage in seven minutes will dictate what is technically possible. Also, it’s a one-shot deal, so it’s tough to risk anything complicated. But at the same time, innovation is essential. What made it possible was a strong team with lots of talent. It was a great honor and pleasure to work with them.