“Treat Me Like a Man”: K8 Hardy on Outfitumentary 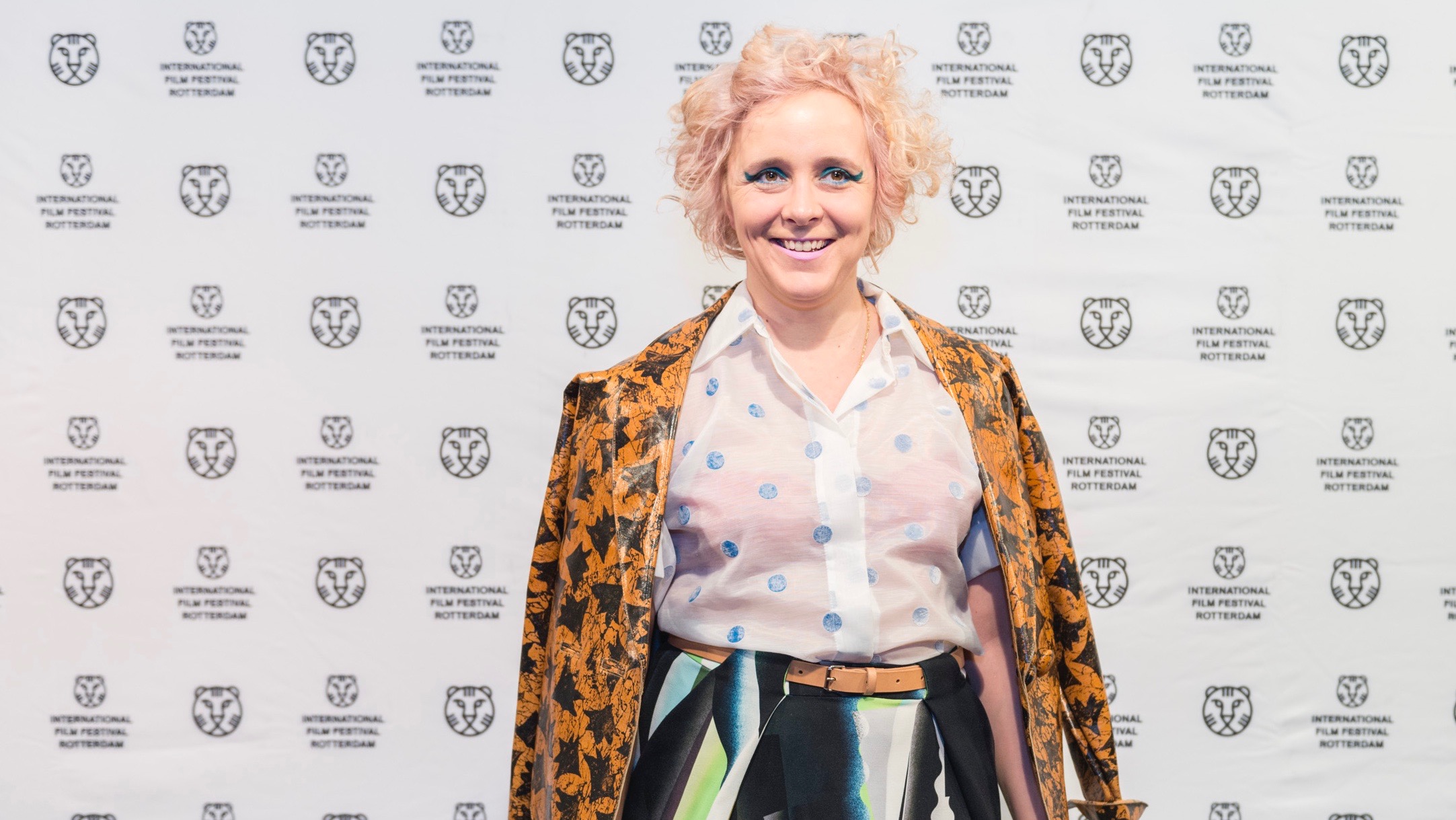 by Taylor Hess
in Directing, Festivals & Events, Filmmaking
on Feb 22, 2016

“I wanna be where the boys are…” sings K8 Hardy as she makes her way to the final TigerPro discussion at the 2016 Rotterdam International Film Festival. She’s a panelist in a 90-minute panel discussion, “Commodifying the Queer,” and her attitude walking in is guarded. “Lately, my perspective is just, you know, treat me like a man,” she sighs before the panel begins.

Gender, feminism, queerness, and identity are all subjects in Hardy’s work as an artist and filmmaker, but being “called upon as the radical feminist lesbian,” as she says once the panel begins, is stifling. “It’s so minimizing to constantly be read through the context of femaleness or queerness, at least for the actual work itself,” Hardy continues. “On one hand, it’s great that we’re here talking about it. But then, on the other hand, it can feel limiting for the content,” she says. “It’s not that it’s marginalizing, but it’s minimizing.”

Hardy’s film, Outfitumentary, world premiered at IFFR in a section of the Bright Future program called ID: gender(dot)net. This context is appropriate, but whether the angle is particularly necessary, for Outfitumentary or any of the programmed films in ID: gender(dot) net, is another question.

As a standalone film, Outfitumentary is more than a lesbian feminist character study in a time capsule. It begins as archival, building a sense of real events re-experienced as it progresses. The film doesn’t emote or comment on adolescence, or feminism, or queerness. It’s all just there, in the images. The experience of watching Outfitumentary is like the reflection of Hardy filming herself in the mirror. It’s as much an experiment of cinema as it is an exploration of queer female identity.

So why the queer banner? Why not just integrate Outfitumentary throughout any section of the festival, rather than in an arguably sub-division section of a main program?

“It’s obviously super complicated,” trails off Hardy as we sit down after the panel to talk some more. She’s lively and engaged during our conversation, but I can’t help thinking back to her pre-panel rendition of the 1977 song by The Runaways, and wondering whether K8 Hardy wants to talk about something else besides being a radical queer feminist.

You started shooting in 2001. How did you edit the footage you accumulated over ten years? The editing was torturous. It was really hard to watch myself so much. Within each shot, I wanted to include, to the best of my understanding, what my intentions were at the time. I tried to include the story of me handling the camera and shooting my own self. The time-specific anomalies, such as talking on the phone, I also included because that’s how it happened — I answered the phone on camera. I didn’t watch any of the footage until two years ago.

How did you interpret the footage when you began to watch it? I see it as a kind of working out how I will be viewed or objectified in the growing age of cameras and cell phones, and being in control of my image, rather than being a subject. I see how I became more comfortable in front of the camera. I went through the pre-selfie phase of awkward giggly-ness to posing in total confidence to boredom. The point is the honesty of the project and just trying to be true to my original intentions.

How much does fashion play into the concept of yourself as an artist? Not much. That industry rips me off, and I really don’t have a good experience in that industry. As all young artists, you get little gigs as you start to have jobs, and I did start to get gigs in that industry in a small way, but I don’t have a great experience with it. As women, we’re constantly called on to be somehow responsible to that industry, to have thoughts about ourselves within our dress and in the stores. It’s oppressive. It’s never-ending. Somehow there’s a response mechanism embedded in there. In general, the way women are judged by how they look is so intense, by everyone. On every level we are dealing with this industry. Or, even if you don’t deal with it, you are expected to participate. And that’s oppressive to me. But I take joy and pleasure in dressing, and I’m not going to let that industry have the last word in terms of style or how someone chooses to express herself.

How would you say your style has changed? Aren’t you going to ask me about structuralist cinema instead? For me, this film is a cinematic work. I mean, I’m happy to address style and how I look, which is about freedom and representation and code-switching. I have a really sensitive eye because of all the research I’ve done…what I’m interested in most when it comes to style is pushing questions of taste.

I absolutely don’t see this film as some style/fashion video diary. But there’s an unmistakable context, at least in the way I’m relating, to your body and clothes and your representation of self, as a woman, in those clothes. So I’m trying to unpack your thoughts and intentions behind that. There’s a total woman-ness about this film and I don’t want to deny it. There’s an extra woman-stink because you see me preening, looking in the mirror, figuring out how we’re being looked at and photographed in a way that’s often seen as the excess of femininity.

But you don’t want to be categorized with the gender or the queer stamp? If I could have a category, it would be structuralist cinema. There really was a form, and I stuck with it for a long time. The intentionality of the recording and of the medium are so prevalent. To be honest, I’m really trying to figure out how to talk about this. I’m sorry if I’m being combative. I’m in a cantankerous mood, and I don’t mean to implicate you in it, but I can’t help wondering if the film wasn’t so gendered, maybe I’d have bigger audiences. I don’t know…I’m just trying to talk about all of this. Maybe it’s my age or something, but as I said, I just want to be treated like a man, like how I see my male peers being treated. If a male filmmaker shot himself in front of the camera in this way, would it be brutal, would it be Warholian? What would it be?