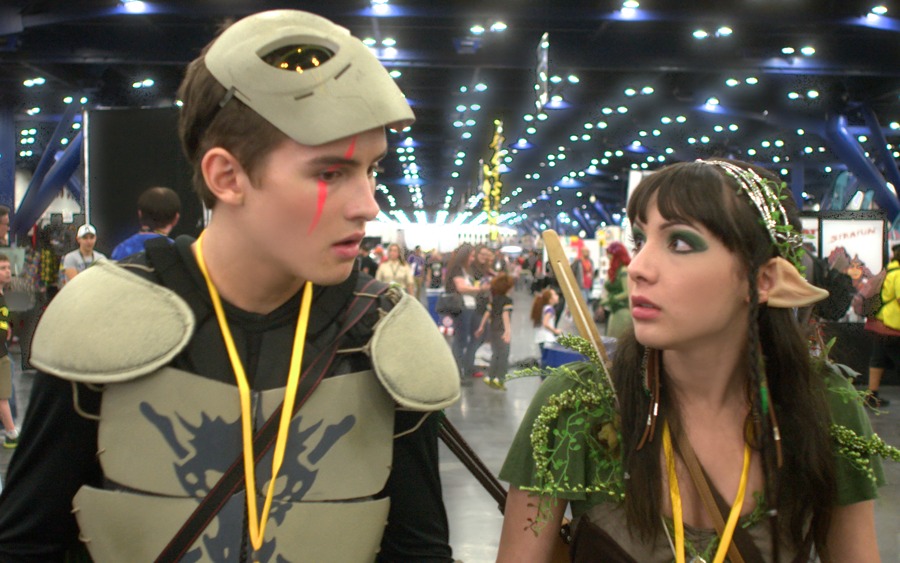 Liford: Well, now I’ve read a ton of erotic fan fiction, slash and otherwise. That, along with examining the personal correspondences between slash writers, was the primary focus of my research before writing the script. I wasn’t sure what my angle was initially, I was just fascinated with this last remaining vestige of pure fandom. I mean now we live in a very nerd-permissive environment where dude-bros watch Star Trek. The fan fiction community is like the last outpost — the Alamo, if you will, of niche fandom. And the moment it all clicked for me was when, after reading many author correspondences, I really began to understand the purpose this form of writing served in their lives. Whether it’s about removing the pervasive male-gaze from sex in the media, or simply a way of coping with a society deemed not ready to accept alternative sexuality, slash fiction is more political than you’d think!

Filmmaker: When did you begin developing Slash, and how long did it take to get made? What were the main reasons it took as long as it did — or went as quickly as it did?

Liford: Once I knew I wanted to explore this world, and acknowledging it’s a bit “out there,” I decided to try it as a short first as a sort of proving grounds. That was in 2013. Based upon its positive reception, and the fact that I really grew to care about the protagonists, I bit the bullet on writing a feature script. It took me a while to get past the fact that on a for-profit feature film, I wouldn’t be allowed to use any pre-existing IPs for my characters to base their erotica on, but I eventually did a bit of “world building” and came up with the Vanguard storyline and associated characters. Getting the tone right was of prime importance to me. I don’t make comedies that play by very traditional rules. I imagine it would be comparatively easy to take particular outsider characters, slash writers, and cast them in a very condescending light. I have no interest in that form of low hanging fruit, especially after living with these characters for so long. It was paramount that the characters be sympathetic and relatable. I really want someone who might find, on the surface, writing erotica about Kirk and Spock ludicrous, to walk away at the very least understanding why the characters do what they do.

Filmmaker: You’ve been a cinematographer on many films, and you chose not to shoot this film yourself. Were you tempted to shoot it yourself? What made you decide otherwise? And how did your work as a cinematographer affect the way you worked with your DP on this film?

Liford: I was in no way even remotely tempted to film this myself. One of the luxuries of having graduated to a slightly higher budget than I’ve had in the past is the ability to let go. As a director, I have a very strong team builder mentality. I like to think I have a marginal talent in bringing together really solid people, both in front of and behind the camera, and then getting the hell out of their way. Smarter folks than I have said that the sign of a good director is the apparent lack of anything to do on set. I do as much of my work in pre-production, much of that simply in proper hiring, and then I sit back and basically act as a creative cheerleader. I’m there if you need me!

As far as my DP is concerned, I was really stoked to find Ellie Ann Fenton. She previously shot one of my favorite indie comedies of the past few years, Zero Charisma, and I quickly realized her temperament and taste were very in line with my own. Temperament makes a huuuuuuuuge difference. In broad strokes, my own past as a DP allowed me to speak to Ellie in more absolute terms. It just made the translation of creative ideas that much easier. But I at least attempted to have my technical meddling begin and end there. Hopefully I made enough of an effort. I certainly tried!

Filmmaker: As someone who has attended SXSW many times, how have you seen the festival and the Austin scene change over the years?

Liford: I mean, it’s certainly grown much larger. I’m so thankful there are various non-downtown venues, because SXSW at ground zero is pretty bananas. I will say the quality increase as far as the films shown has been quite significant since when I first got involved in the early 2000s. And it’s really fun watching the festival develop a distinct identity. When you have such a strong programming team, and with Janet Pierson, who really is a bonafide tastemaker, it’s incredible watching these things go down. I mean, entire film movements literally began at SXSW! Mumblecore being the most obvious, but hey. It’s an entire genre of filmmaking, and its genesis is rooted to the festival and the genetic level.

Filmmaker: Finally, tell me about your two leads. What led to their casting, and what qualities do they have that are important to the film?

Liford: Holy crap. Michael Johnston and Hannah Marks. My dream team! My MVPs! In the past I’ve done a fair share of casting through my network of actor friends. Great talents, but ones that tended to be within my peer group, and thus of similar age to myself. This time around, my leads were two teens. Like actual teenagers, not movie teens. I don’t really know many teens, so we turned to our fantastic casting director, JC Cantu. JC has worked on some huge stuff, and he’s based in LA, so his access to solid talent was pretty unfettered. JC brought both Hannah and Michael in to read on tape. I wasn’t even in the room with either of them initially. But those raw tapes, without any direction from myself, showed such a natural understanding of character. Michael, for example, right out of the box, made choices for the character of Neil (our male lead) that were insanely on-point. No other audition was so perfectly nuanced to that character’s particular attitude. It’s like he was hard-wired for the role. And Hannah. I can’t say enough about her. Hannah is one of the most put-together, professional actors I’ve ever met. She’s a true multi-hyphenate. She writes, directs and acts. And she’s extremely mature for her age. Her character, Julia, needed to be more worldly than Neil. She sort of guides him through a bunch of awkward story situations. And that’s Hannah. Working with these young actors, and being involved with their process in discovering these characters, was incredibly eye-opening and the single experience I cherish most from the making of this movie. Now I’m getting all misty eyed!