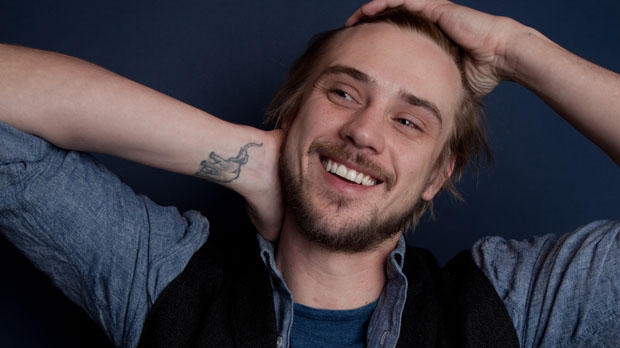 When I catch up with Boyd Holbrook on the phone, he’s out grabbing some tacos. It’s 4 p.m. in Hawaii, and Holbrook describes his stay in the Aloha State as “a vacation,” which, these days, must seem like a foreign concept to this multi-talent, who has just wrapped work on the controversial Jane Got a Gun before heading off to a co-starring role in Sara Colangelo’s Little Accidents. At 31, this lean and characteristically shaggy blonde, whose look lands somewhere at the intersection of River Phoenix and Michael Pitt, found early success in modeling, but more recently, he’s been tirelessly realizing his career in film — acting but also, now, writing and directing. “Modeling, for me, was really just a way to pay for school and get out of Kentucky,” Holbrook says, an intermittent twang cropping up in his voice.

Discovered while working as a theater carpenter in his aforementioned home state, Holbrook headed for New York to kick off his film education, his former job proving a potent metaphor for the arts career he’d be building. Classes at New York University and Columbia were followed by roles on the big and small screens, in projects as diverse as The Host and Showtime’s The Big C. At Sundance this year he was featured in Very Good Girls, and in May he appeared in a small but important role in Steven Soderbergh’s Behind the Candelabra. But Colangelo, a former “25 New Face,” may be giving Holbrook his breakthrough part. In the feature-length version of her award-winning short, Holbrook plays Amos, a mentally scarred stroke survivor, a role that’s antithetical to many of the offers that come Holbrook’s way.

“There’s always the chance to play some handsome romantic lead,” Holbrook says, “but I’m not very interested in that. I’m more interested in rounded-out people who are fucked up and trying to get it together. I’d much rather play a character with 10 or five lines if he has a some depth to him.”

For Little Accidents, a Sundance Lab project, Holbrook took an ultra-Method-y approach, carving Amos, a former coal-miner, from his own father’s 30-year experience in the industry, and from whatever insights and face time he could glean from doctors and real-life stroke victims. After calling “every neurologist in the New York phone book” and failing to make a connection, he eventually met with a friend of a friend’s physical therapy professor, with whom he pored over the script for “40 hours over three days,” nailing the “overwhelming and mystical” nuances of neurological trauma.

Holbrook aims to bring the same perfectionist’s verve to the other work he has brewing, such as The Peacock Killer, a short he’s directing from a story by Sam Shepard; a role in Out of the Furnace, the sophomore feature from Scott Cooper that incidentally co-stars Shepard; and The Vacancy of Your Heart, a script Holbrook wrote that he describes as “my baby, waiting to hatch.” He’ll also star in Terrence Malick’s next movie (provided, as he quips, “his part isn’t cut”), and he’d like to pick up sculpture again. It’s no wonder that when I ask him if there’s anything else he’d like to do, Holbrook says that “creating a new form of energy” for himself would be nice.  – R. Kurt Osenlund