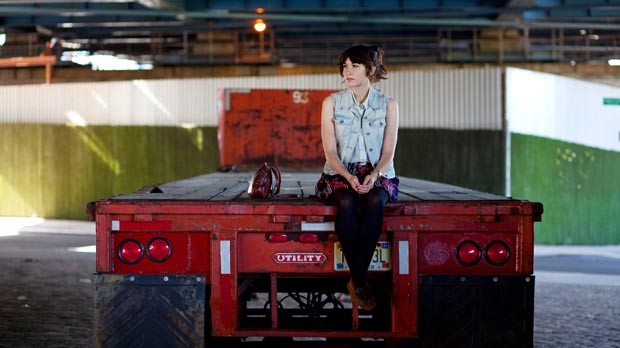 Some people just grow up knowing what they want to do. At the age of six or seven, British-born, U.S.-based animator Julia Pott, with a little parental support, had already found her vocation. “My mom was the one who really encouraged me to draw; she got me to draw my bad dreams,” recalls Pott. “We wrote a little book together about a scuba-diving detective who tried to overthrow the evil King Titan. In the morning I would draw the frames and at night we would write it together in bed.

“I don’t think I ever wanted to do anything else,” Pott continues. “I always drew and I always told people I wanted to be a cartoonist and work for Disney. But I think I mainly just wanted to be Snow White at Disney World…”

While studying illustration and animation at Kingston University, Pott got widespread attention for My First Crush, a delightful hand-drawn short about puppy love that borrowed Creature Comforts‘ conceit of fusing vox pop interviews with animated animals. Though the film may be Pott’s best known to date (it has almost 1.5 million views on YouTube), it marked only the start of her development.

After graduating from Kingston, Pott did animated visuals for indie heroes The Decemberists and Bat For Lashes, but says it felt “almost too easy — I didn’t feel like I was pushing myself in any way.” So she enrolled at London’s Royal College of Art, where she further honed her style, making the animated shorts Howard (2010) and Belly (2011). Though they also feature animals (playing human roles) rendered in Pott’s distinctive illustrative style, these shorts tackle more somber subjects — a relationship breakup and the pains of childhood, respectively.

Belly, Pott’s most evolved work so far, is a heartbreakingly poignant tale of two brothers, Oscar (an elephant) and Alex (a horse), and the monster Oscar loves on a fateful trip to the ocean. “It’s about being a kid and so in touch with spooky things,” says Pott. “I called it Belly because it’s about living with this thing that you’ve lost in the pit of your stomach for the rest of your life…I really like feeling sad. It’s so good sometimes to just wallow in misery.”

Since graduating, Pott – who has an American mother and spent her childhood summers in the Hamptons – has been living in Brooklyn, where she is now working on a three-minute short for Channel 4 about the end of the world, which she says also mines a deep vein of melancholy. After that, she hopes to write a TV series or a feature, a “spooky romantic comedy, like an animated Buffy.” In the future, she’d love to do live action. “But I don’t know how to do it,” she says with a smile, “so I make animation.”