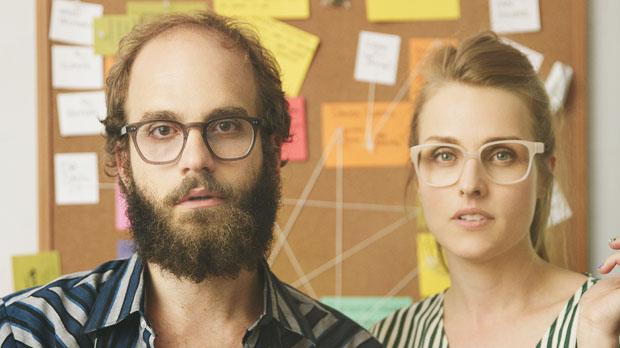 Katja Blichfeld and Ben Sinclair, creators of High Maintenance, the hilarious and profoundly New York Web series that traffics in pot dealing and close quarters of both the emotional and physical variety, have some unlikely influences. “We loved Six Feet Under,” Sinclair says of Alan Ball’s venerable treatise on death and the ties that bind, “but we really loved the first five minutes of it. You just dropped into someone’s life and they die.” “And you always knew that was coming,” Blichfeld interjects. “But every week, the true question was, ‘How are they going to die?’” they echo in unison. For High Maintenance, that source of intrigue was adapted into “How is this character going to meet the weed dealer?” Sinclair explains.

Heightened as its concept may seem, High Maintenance was a rather personal venture for the couple. Blichfeld, an Emmy-nominated casting director on 30 Rock, and Sinclair, an actor and editor, drew predominantely from their personal lives in crafting the episodes, sometimes alongside their manager and co-executive producer Russell Gregory. “We long had this dream to create something — a film or a short, or a Web series — to get out all these weird stories that have happened to us over the years,” Blichfeld says. “If something felt false to us, if we hadn’t experienced something ourselves, or didn’t have a first hand account for experiencing something, we didn’t feel comfortable portraying it.”

Of course, the premise also presented an interesting opportunity to explore one of New York City’s most widely practiced contradictions.  “New Yorkers are so private and protective of their personal spaces,” notes Blichfeld. “They can have a hard time even acknowledging their neighbors, yet they have no problem allowing a total stranger, and for all intents and purposes, someone breaking the law, into their homes.” In High Maintenance, the “someone” in question is the nameless drug dealer, played by Sinclair, who acts as the audience surrogate and keyhole into the lives of these strangers in need. A need, Sinclair is quick to point out, that manifests itself beyond the obvious desire for drugs. “Not all of them are stoners. The theme of the show, and the reason it’s called High Maintenance, is maintaining. All of them are just trying to maintain some semblance of sanity and survival in New York.”

For a debut effort, Sinclair and Blichfeld have assembled a particularly impressive rotating cast from their legions of actor friends. Notable cameos include SNL and 30 Rock writer Hannibal Burress, The Color Wheel’s Carlen Altman, and Michael Cyril Creighton, creator of Jack in a Box.

With the release of the third season, Blichfeld and Sinclair are only looking for more opportunities to showcase their ensemble storytelling. Calling from L.A., where they are pitching High Maintenance as a 30-minute television series, Blichfeld admits, “I think people have an expectation of when they watch something online, called a ‘webisode,’ how long it’s going to be. We’ve already played with, ‘How many minutes will people indulge from us?’” She exhales: “We need more real estate. We have so many stories left to tell.”—S.S.