Over 100 Cast Members and No Permits: How I Shot Ham on Rye in Los Angeles 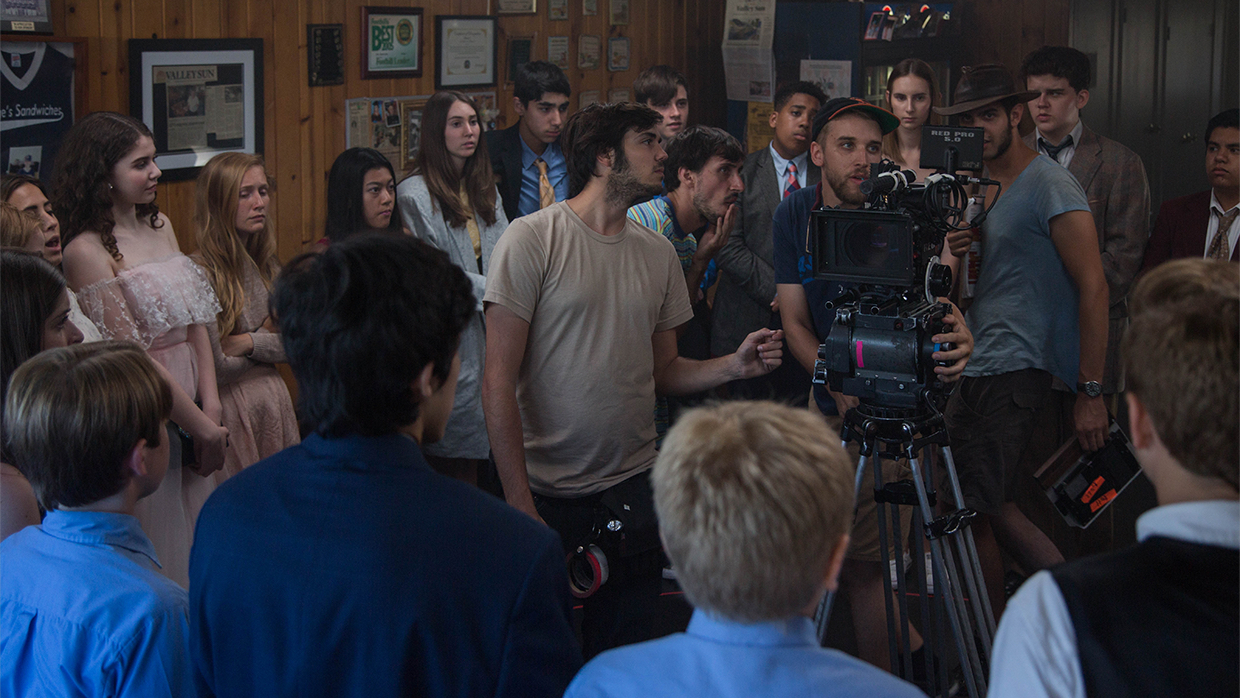 by Carson Lund
in Cinematography, Filmmaking
on Feb 5, 2019

The following guest essay on the making of Ham on Rye is from cinematographer Carson Lund. The film premieres at the Santa Barbara International Film Festival this week, and the official site is here.

For independent filmmakers, Los Angeles is a city of contradictions: it’s both an ideal place to congregate with likeminded artists and craftspeople, and a truly daunting place to actualize on-location productions if you’re low on cash. Between inflated permitting fees, hefty fines for unlawful shooting, and a police force with plenty of experience enforcing these standards, there’s no shortage of ways in which the city formally discourages guerrilla shooting, and when you factor in the vigilante homeowners and opportunistic small-business proprietors, you’re left with a dicey situation. All of which, at the risk of sounding boastful, makes it something of a miracle that my production team managed to wrap principal photography at all on Ham on Rye, an ambitious comedy-drama with an ensemble of over 100 that makes liberal use of unpermitted outdoor locations on a shoestring budget.

As the cinematographer on this project, I was met with unique challenges on almost every one of our fourteen shoot days, a grind that was admittedly self-inflicted. The vision for the film that writer/director Tyler Taormina and I shared was not in line with the kind of formal and aesthetic choices one would expect of a microbudget feature. Our pre-production viewings and conversations circled less around the heroes of aughts-era mumblecore than around a kind of filmmaking gloss tied to the pre-digital period: the films of Robert Altman and those of John Hughes, odd as the pairing may seem, were key stylistic touchstones for Tyler, while I was particularly inspired by the florid lighting in the midcentury melodramas of Vincente Minnelli and Douglas Sirk, as well as their postmodern mutations in the work of photographer Gregory Crewdson. How could such a modest undertaking as Ham on Rye approximate the production values of these reference points? In getting rather close to doing so, these were the corners I cut and lessons I learned.

Invest first in camera and lenses, but carefully consider the strategy. Seven or eight years ago, Shane Hurlbut might have told you DSLRs were the future of cinema and that there’s no reason why you, a poor filmmaker with no connections, shouldn’t be using them. Given rapid evolutions in image technology, however, such pronouncements haven’t aged well, and now DSLRs are not so much The Total Package as they are a very nifty solution for very specific projects with very particular looks. The reality is that they’re extremely limiting when it comes to really honing an aesthetic, whereas higher-end digital cameras like Red and Alexa enable exponential benefits for a difference in cost that is, with new private rental services like ShareGrid, considerably less than what it once was. By talking with personal owners and endearing them to your passion project, even offering up the perk of an associate producer credit, it’s possible to land on some startling deals, particularly in a city where non-industrial arthouse film production is something of a novelty. Ultimately I settled on a Red Scarlet X 4K for a manageable discount rate, confident in my view that the initial expenditure would be justified by the dynamic range gains on set and the color grading benefits further down the line. None of this is to suggest that the camera alone can do the heavy lifting of production value for you, but it does eliminate the possibility that you’ll be fighting your technology.

Quality lenses are equally vital assets, though the monetary gap between reasonable and top-of-the-line is generally tougher to swallow than with cameras. I ended up using Zeiss Super Speeds, a sturdy cinema lens series with the potential downside of hard edges and what might be described as a lack of character, but the price was right and the preferable alternative would have thrown our budget for a loop. I committed to my usual trio of focal lengths—25mm, 50mm, and 85mm—while adding in a few single-day rentals of an old Angenieux zoom lens for our more Altmanesque sequences. The package did the job, especially for nocturnal scenes where the maximum aperture was a blessing, though in the time since, with the help of a few generously funded commercial projects, I’ve come to realize what I would have done differently. Committing to prime lenses meant quite a bit of time spent on lens changes, which wouldn’t have been an issue if my AC wasn’t also by turns acting as a grip, dolly grip, producer, and production designer. Together, a set of two Arri Alura zoom lenses can account for a range of 15.5-250mm while staying below F2.8 across different focal lengths. That versatility would have been a bonus. 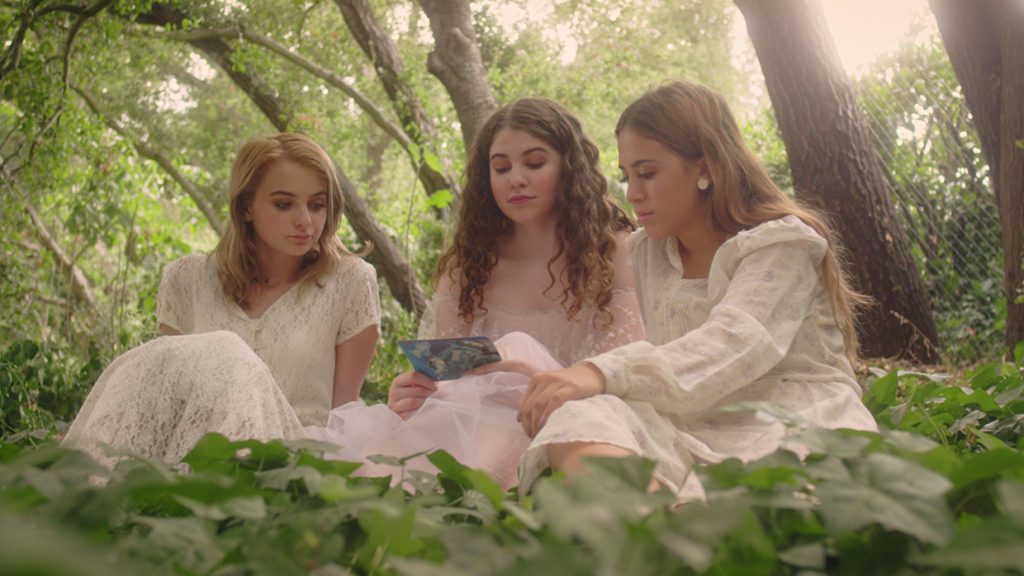 Dramatically limit your crew when you can—and find friends with equipment. Obviously, the most thorough shoot is a well-staffed one, especially on days with multiple company moves. However, with several such days in our schedule, it wasn’t practical (or financially feasible) to have a full grip and electric team on hand migrating a U-Haul of equipment from place to place, so one of our primary scheduling factors became crew size. If I could manage a location with just two additional crew members (yes, gracious friends with especially high investment in the project) pulling double or triple duty as opposed to five properly allocated specialists, I would reluctantly do so. Often this would mean I’d have to settle for a quick Flex Fill solution as opposed to a fully rigged bounce frame, or that I’d have to limit the possible directions I could shoot based on what the available light was offering. What’s important is to save your largest crew budget expenditures for the days when you need to rely on more complicated artificial lighting setups, in which cases you need to pull out all the stops: rent exactly the units you need from the most affordable rental house, exhaust your personal supply of tape, stands and gel scraps, and kindly inquire to any freelancing G&E acquaintances (I’m fortunate to have a few) about anything they’ve invested in that they could tack on to their day rate. And yet, in such cases, you still need to…

Streamline the setups for large ensemble sequences. This was huge. Two of Ham on Rye’s dramatic peaks are lengthy party scenes—one a rambunctious celebration of youth, and one a nocturnal gathering of burnouts—and we only had a day, respectively, to shoot each one. It was on these days that I hired my largest crews. The idea was to create efficiency by lighting the space rather than every shot individually, a philosophy I borrowed from the late Harris Savides. In the first sequence, we lit a small diner by replacing all of the existing fluorescents with flicker-free Kino bulbs at 5600 Kelvin, which created a natural extension of “daylight” throughout the room. However, the east-facing street outside of the business’s wide front windows was blasted by sunlight on this hot July day, so in order to match exposure on the windows and the walls, we outfitted the glass with a layer of ND gel that stayed there for the duration of the shoot, only occasionally requiring a neatening and re-taping. With the cool top-light from the ceiling, the natural bounce from the wooden walls and tables, and the bright daylight key from the front windows, I was afforded ample opportunity for lighting dimension in almost every direction I pointed my camera, allowing the shoot to run quickly without too many elongated breaks for lighting tweaks.

The later sequence, all shot at night, was more of an experiment, and not only because we had to handle our pre-light in daytime conditions. This was the scene where the limitations of our resources were most apparent, even with the generous contributions made by my gaffer and key grip of lights in their personal collections. Given the scuzzy vibe of the party depicted in the film, I knew that practical sources would need to play a critical part in the atmosphere, so we dangled cheap Christmas lights and China balls throughout the backyard where the scene takes place to supplement the bonfire in the center. This alone, however, would look pedestrian, and we needed a feeling of the uncanny. Our solution was to approximate a “moonlight” source with two 800-watt Joker-Bugs blasted into 12x ultra bounces, though the shape of the yard and arrangement of props necessitated that we place these lights in opposite corners of the set, thus defying logic by generating incongruous shadows and unnaturally harsh edges. What we achieved was something both garish and haunting—a strange hybrid of Are You Afraid of the Dark? and Blue Velvet—and more importantly, a look we could commit to with only minor alterations throughout the night.

Don’t have a camera car for driving shots? Find someone with a convertible. In our case, we were lucky because Tyler drives a beat-up hand-me-down Saab with an easily retractable roof. Surely this would have been tricky to secure otherwise, but the effort would have been worth it. In just a few quick steps, we were able to achieve remarkably smooth fast-moving tracking shots, and we’d just pull the car over or drive away anytime we found ourselves near a busy street or heard a petulant homeowner grumbling nearby about permits. We simply hoisted our tripod down in the middle of the backseat and covered the legs with sandbags to minimize shake, and I operated from a perch on the side door. In this scenario, the driver becomes the dolly operator and the front-seat passenger acts as their assistant, monitoring the action outside the car and instructing car speed relative to the subject. Obviously, this should be done on the quietest streets possible; we found sleepy suburbs on the outskirts of the city. And as long as you lean toward a relatively wide focal length, the car doesn’t need to go very fast for the camera to register the illusion of speed, so we never had to exceed 15mph and endanger ourselves. (Still, exercise caution.)

It’s necessary to note that none of these scenarios would have been possible without the efforts of an especially gung-ho group of incredibly talented friends, many of them working for little to no money. I try my best not to take this filmmaking family for granted, as I recognize that not all independent creators, and particularly those outside of major urban centers, have access to such abundant human resources. But I do want to stress that, given the right alchemy of circumstances, it is possible to produce a film that closely resembles a million-dollar movie for vastly cheaper than what is institutionally recognized as “low-budget” or even “microbudget.” It may be true that, in its final form, Ham on Rye only passingly or partially emulates the aforementioned stylistic reference points that were held as guiding models, but the look we did achieve—an eccentric middle ground between art cinema polish and the simplicity of Nickelodeon shows Tyler and I fondly recall from our youth—is something I’m immensely proud of nonetheless.