Put It In Writing: Living Through the Films of Abel Ferrara, Part Two 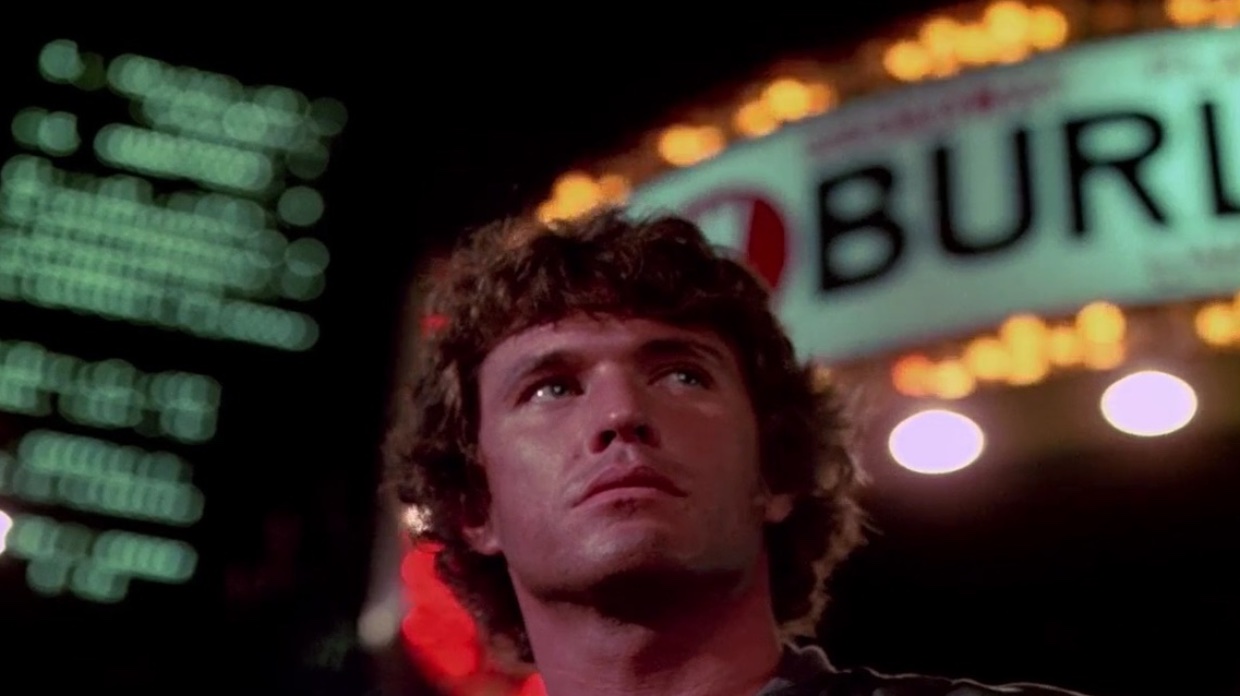 Evan Louison last wrote about Abel Ferrara for Filmmaker‘s 25th anniversary issue in his report, “Letter from Rome.” Given the assignment to interview Ferrara in conjunction with his month-long MoMA retrospective, Louison responded with a five-part personal memoir that tracks the impact of the director and his work on his own life. Check back each day this week for the next in the series, and read Part One here.

“I’m just here to raise the flag of compassion and forgiveness,
in a society that’s being overrun by hatred and violence.”

Weekends in Manhattan, looking over your shoulder, anonymous among millions and feeling free for the first time, the escape continues. Getting high in Washington Square. Walking east over to St. Marks. Going to JammyLand, pouring over Black Ark and Studio One records. Tonic, ABC No Rio, Wetlands and Brownies. Places that will be gone by the time you write this. Looking back at this time, everything feels that much more crucial and part of your vitality, like the whole world is facing you. You wander downtown on your own, finally far enough from the oppression of parochial boarding school Chapel Services, of daily Bible Studies and constant classroom prayer, to feel like there might be hope.

Maybe this is where it lives.

Turning back west after dark, you pass Kim’s Video and go inside. You’re going to miss your train, but you can’t resist the pull. Inside on the shelf, a white cardstock cover with handwritten words reading: 9 Lives of a Wet Pussy / Early Short Films of Abel Ferrara. You ask how much at the counter and the guy points at the RENTAL sign and says Not for sale without looking up. Later on you question this memory, if it really happened. Did the tape exist? And years later, again in the dead of night, you finally watch 9 Lives.

THERE ARE THOSE WHO KILL VIOLENTLY! is what the box in the HORROR section proclaims on the back, next to a longhaired figure holding a power drill. When you take Driller Killer home you wait until late at night to watch it. The first card you see when you press play reads:

THIS FILM
SHOULD BE PLAYED
LOUD

But you can’t turn it up too high for fear you might wake someone and be punished. So instead you huddle close to the set and the quality of the tape is terrible, but somehow it’s worth it. You can’t look away. Even as whole scenes seem to jump into each other, marred by static, you’re glued to it. 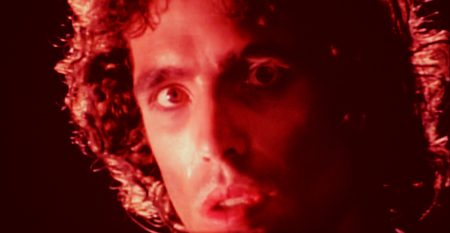 Reno Miller, the eponymous monster, is played by someone named Jimmy Laine. He first appears as a hunched, spindly figure traipsing nervously down the aisle of a church. His whole body racked with discomfort. There’s a sense of evil in that church. He inches toward the front pew, and there’s an old man there reciting a strange incantation. You get even closer to the screen in order to hear the words of the prayer: The forgiveness of saints… Communion of sinners… Communion of saints… Forgiveness of sins… It makes no sense. But from this bizarre meeting forward, Reno’s life unravels. Implicit in the text of the film, this meeting is dreamlike and exists only to illustrate the orphaned identity of the artist in a modern world — adrift, beaten by expectations, devoid of options. What the encounter in the church illustrates is the lack of a loving father, an overbearing theme throughout. From an uncaring art-world patron, an indifferent super, to predatory bill collectors, it all circles back to that haunted apparition in the church pew. Reno flees from the old man in the church, denying he knows him, recoiling when the elderly stranger reaches out and grabs ahold of him without warning. But that night while asleep, he tosses and turns, and the same wraith returns, this time along with his father, appearing to him in a dream. His father smiles and tells him — “It’s not only near, it’s all around you, this city… Now you’re going to see it. What’s going to happen…”

It’s this dream that’s the start of a rampage and the only time you’re given even a glimpse of what drives poor Reno on the road to hell. He starts seeing blood everywhere and embracing a new identity. It feels like a secret that only you’re supposed to know when you read that Jimmy Laine is none other than Abel Ferrara himself. Reno Miller, the father from 9 Lives, this is how the author of the films lets himself be known. From the start of his work, Abel represents a meta-presence in the narratives, his dream life encroaching on his waking state. He is perhaps the first of the modern American auteurs to use his own person as text. The image of him as Reno Miller, shaking his hair, sopping with blood after a kill, the spray of red coming off him like a dog drying itself, this is his official portrait.

But there are these characters everywhere in Abel’s world: Zoe Lund’s Thana in Ms. 45, exacting her vengeance on a city of heartless men. Struck mute by fate, she’s turned vigilante by misfortune. Tom Berenger’s Matt Rossi in Fear City, haunted by the title fight gone too far, when no one would stop him from brutalizing another. It’s made him distant and cold. In Ms. 45, behind an attacker’s mask, Reno Miller reappears — raping Thana in the alleyway. Abel, again. This is the last time he appears in any significant role in his own work. It feels like a hidden tell, something planted by the author. Abel saying, this is the same city, the same world where monsters are born. 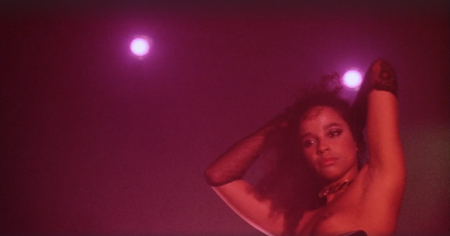 Violence is a contagion in Abel’s work. Thana turns to retribution in order to avenge what is taken from her in the course of Ms. 45’s opening. In Fear City, Rossi must return to his own deadly weapon — his hands — to achieve justice. In this film, largely overlooked by so many of Abel’s adherents, it becomes impossible to shake the sight of Rae-Dawn Chong lying on the subway platform after she’s attacked. So chilling, so stark. An elegant girl lying still in a pool of blood, in the aftermath of her own assault. Cut across the face, she’s left permanently scarred. No one comes to her aid. This is what reality represents to you. A place where trains pass by en route elsewhere, indifferent to your pain and struggle. The world keeps a tight schedule in spite of you.

You’ve seen Berenger before, but there’s one face you recognize more than any other in this movie. The cop who’s trying to put it all together, who for some reason Rossi won’t help. They’re on opposing sides but want the same thing — a recurrent conflict in Abel’s work. You can’t trust the police. The movies teach you this no matter what they intend, no matter how they may mythologize the apparatus of justice. But Billy Dee Williams’s Detective Wheeler has a handsome kindness about him and seems hellbent on taking it to the gangland, on finding this killer. He’s the one who summarizes the movie:

Reno Miller and those characters that follow him in Abel’s work represent the force of anger. Decades down the line, you ask Abel about it and he calls these characters the product of a deluded life. When first you meet him onscreen, the Driller Killer is the ultimate channel to the dark side. He speaks to his paintings. His paintings speak to him. They tell him things, call his name. He hears their voices and knows what they’re saying. What they’re insisting. But like Reno’s view from above Union Square — bums drooling on themselves, wallowing and lost in squalor – and like the sound of The Roosters upstairs, he can’t get away from them. He looks down over the park with binoculars and sees a cold-blooded, broad daylight slaying, and everything begins to fall apart. He wanders the streets and tries to rouse a sleeping derelict. Begging to help. But once he crosses over, he’s no longer compassionate or amused. He’s past it. He savages the most needy because none can see his own need. None will recognize all he’s sacrificed and so he bleeds all in his way, for his troubles. A current of hunger and fulfillment runs through all of this. Chasing the high of carnage, Reno is that abject loss of hope. And perhaps mockingly, perhaps poignantly, at the end of the film, there’s one last card.

Because maybe it is. Maybe this is where hope lives. A character living among the trash, disposing of it as only he sees fit, sends lives back down the sewer they crawled out. So fitting is it that he sees himself worthy of patronage, is so easily incensed when denied it, and yet finds only disgust and rage at the ever-present noise from a No Wave band — Tony Coca-Cola & The Roosters — playing in an adjacent loft space. For the entirety of the narrative, the focus switches between Reno’s struggle and the reverie of the band next door. Tony and his Roosters are the only characters in this misbegotten onscreen world who are truly free, who never once lose hope. They’ve not a care in the world for work or obligations. They don’t have to work. It’s this injustice that’s germane to Reno’s fury. It’s upon this thin contrasting edge that the narrative teeters over the precipice. This is what the director wants you to see.

No one understands you. This is how close we all are to boiling over. And it’s this same plea so many of these characters offer up. Reno Miller. Matt Rossi. Tony and Tye, the star-crossed lovers in China Girl, both asked the same unanswerable questions by their elders — Why would you want more than what you’re given? Isn’t the life you have by birthright good enough for you? The answers — Just because, and No — aren’t good enough. When they fall, holding hands on a Chinatown street, their bodies in corpse pose, it’s something you understand. Injustice is something we recognize naturally, even if we’ve never witnessed it. Each of us know some semblance of tragedy, and carry its definition with us. To see it writ large on the screen ahead of us, this is how we endure.

Evan Louison is a New York writer. Abel Ferrara: Unrated runs May 1-31st at the Museum of Modern Art.

Read the next in the series, part three, here.