When the Streaming’s Over: The Fight to Save Vulcan Video 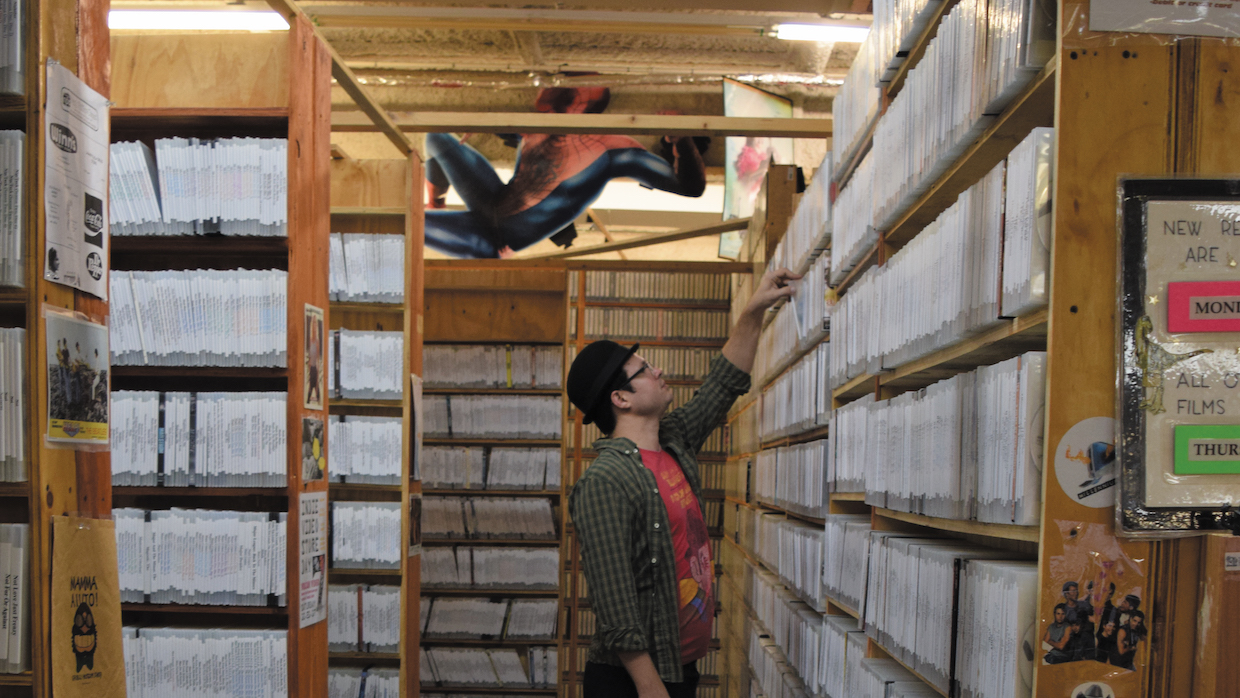 “A producer buddy once said to me, ’You go to New York and Los Angeles to make movies, but you go to Austin to actually watch movies.’ That’s always rung true to me.” So avers Jacob Knight, general manager of Vulcan Video in Austin, a brick-and-mortar video rental shop that’s helped fuel cinephilia in Texas’s capital for more than 30 years.

With an estimated 83,000 titles on DVD and Blu-ray and an additional 7,000 on VHS, Vulcan would’ve ranked as a world-class video store in any city during any era. But as streaming services continue to proliferate and rental shops dwindle, Austin’s ability to sustain not just one but two great video shops (Vulcan and I Luv Video, the latter similarly massive and of comparably venerable vintage) has become a core element—alongside innovative institutions like Austin Film Society and Alamo Drafthouse, and destination festivals like SXSW and Fantastic Fest—of the city’s bragging rights as a film culture mecca.

This May, Vulcan announced a GoFundMe campaign for continuing operating expenses: “Help Save Vulcan Video!” Perennial Best of Austin award-winner Vulcan now conjured images of another Austin far removed from the defiantly free-thinking subcultural oasis depicted in Richard Linklater’s Slacker: rising rents, gentrification and condo-forward yuppie homogenization—a place so many people thought of as fun, cheap and easy to live in that it’s become a very expensive and difficult place to live. Vulcan’s campaign, which Knight describes as a “one-time Hail Mary” in response to a “five-alarm fire–type financial emergency” (as well as, more optimistically, a “Bat Signal”), has brought in more than $30,000, which will go a long way toward the store’s immediate crisis. But zooming out, it telegraphed a larger message: From this point forward, keeping a video store alive, even in Austin, will be a fight.

I should know. Over the past two years of—sort of, almost—making ends meet with freelance writing and filmmaker festival-strategy consultations, I’ve put by far the most time and energy into an entirely volunteer (and, to some, quixotic) project: a brand-new, nonprofit, volunteer-run, collectively owned video store, Beyond Video, in my own hometown, Baltimore. But, although we share a mission with Vulcan, we’re actually modeled in many ways after the late, great local video store Video Americain, immortalized in John Waters’s Serial Mom and where myself and several of my current coconspirators worked over the years. And while Beyond Video carries the obligatory new releases. we specialize in a deep back catalog of foreign, classic, cult and LGBTQ titles. The seed of the inventory came from our own personal collections, bolstered by a Criterion-heavy estate purchase; as we took stock of what we did and didn’t have, I created a (still) regularly updated online wish list of titles we didn’t yet own and solicited donations from that list online, as well as reached out to filmmaker and distributor connections from my decade working as lead programmer at Maryland Film Festival.

After a successful Kickstarter campaign for startup costs (and months of flooring, painting and shelf-building), we started renting a collection of just less than 9,000 items from a two-story rowhouse, formerly home to a punk and black-metal record store, located in a very central, walkable neighborhood. By volunteering our labor, we’re able to put every dollar back into the project, now boasting a collection nearing 15,000 DVDs, Blu-rays and VHS tapes—modest relative to Austin standards, but rapidly growing, highly specialized and already many multiples the stock one would’ve found back in the days of “Blockbuster nights.” Meanwhile, we’ve had more than 400 people establish recurring membership donations since opening in December 2018—substantially better than we’d hoped to reach in our first year, though still decidedly a number requiring we volunteer our time.

As a money-making enterprise, the halcyon days of video stores are unquestionably behind us. Here’s how Knight puts it: “People love the appearance of participation, but actually putting their money where their supposed beliefs are is a whole other ballgame.” Blockbuster (which, nostalgia be damned, us in specialty independent video stores never saw as anything other than a monopoly-seeking enemy) is famously down to one tourism-oriented location in Bend, Oregon. In major markets, most iconic shops like New York’s Mondo Kim’s have long ago shuttered (an outlier being Seattle’s legendary Scarecrow and its more than 120,000 titles). Video Americain had six locations at its peak across Baltimore, DC and Delaware, each gone the way of sidewalk sales. Vulcan Video had three in Austin at one point, and its sole remaining location is in a part of town that yields considerably less foot traffic than earlier iterations, necessitating a greater reliance on destination traffic. Around the country, there are few signs of hope, such as Vidiots’s recent announcement of a campaign to reopen as a video store and theater in the Eagle Rock neighborhood of East LA. But whether it’s the theater-plus-video-store visions of Vidiots and Alamo’s Video Vortex (one collection of which, Knight notes, was largely assembled from a former Vulcan location) or our volunteer model at Beyond, contemporary video stores need a little something extra (or perhaps to be that something extra, adjacent to something more stable) to survive.

Vulcan’s events calendar offers another proof of concept for an “It Takes a Village” approach to keeping video stores alive and kicking in 2020. The store has hired an events and media manager, Randi Adams, and rolled out an impressive array of happenings. Bolstered by free beer donated by local breweries and popcorn donated by Austin Film Society, screenings have ranged from 16mm shows of Joe Dante’s The Howling and Don Knotts in The Love God? (both coordinated with the help of Ivan Peycheff of the American Genre Film Archive, another Alamo-adjacent Austin organization with a national reach), to “Taps & Tapes” VHS double features pairing projections of analog-only cult titles with hoppy suds, to a rare show of Kinji Fukasaku’s Yukio Mishima–starring queer cult favorite Black Lizard curated by LGBTQ cinema expert Evan Purchell. Vulcan events have also included live music and performance, such as a recent double bill of a Weezer cover band and a drag performance by local celebrity Mandy Quinn. It’s a new phase for Vulcan, perhaps, but very much reflects an old Austin sensibility, tonally channeling the psychotronic cult-film events Alamo pioneered in its early days.

Other than an upcoming one-year anniversary party at a neighboring club, we haven’t thrown many events at Beyond—volunteering enough retail-work hours each week to keep our shop open is ambitious enough for the handful of folks at our core. Besides, in some ways we may have an easier road ahead of us with Beyond than Vulcan has in Austin: Rather than fight to keep an institution alive, we’ve brought back an experience very much missed. In the roughly five years since Video Americain closed its last location, Baltimoreans have had more than enough time to tangibly miss the video store experience, as well as try out every screening service under the sun to gauge their strengths and weaknesses. As new services pop up every day, existing services increasingly prioritize their proprietary serial content over film offerings; Knight points out that articles like Matt Zoller Seitz’s recent piece on Disney’s acquisition of Fox has called into question for even the average consumer their big- and small-screen access to film history. For many of us, there exists a friction between how much we spend on streaming versus how much we get—especially when measured against the hollow promise with which the switch from physical media to streaming was initially sold, of quick and easy at-home access to everything. Within this gap, video stores may have a window of opportunity in which to bounce back.

“The streaming bubble (so to speak) is eventually going to burst,” agrees Knight. “It’s going to become like cable during its peak at some point, where people suddenly ask themselves, ’Why the fuck do I need HBO, Showtime, The Movie Channel, Starz and 590 extra channels?’” Knight does foresee a near future in which “another conglomerate comes along and discovers a method to consolidate them all in a fashion that makes much more financial sense (on a bill, at least).” But a massive consolidated invoice isn’t a solution. “It’s all cyclical: History repeating itself as the machine keeps inventing new ways to make you feel like you’re getting the most bang for your buck, when it’s really just pickpocketing you via newfangled delivery tech.” Indeed, streaming fatigue feels very real here at Beyond, as customers (re)discover how pleasurable it can be to browse in a physical space with friends surrounded by cultural objects—and how boring it is to have to become an expert in corporate ownership of splintering and merging film catalogs just to track down a way to watch your favorite movie. “This isn’t just a video store or a video archive—though it can be just that, if you want it to,” says Knight. “It’s about bringing all sorts of strangers—from various backgrounds, sexualities, educational levels, who contain multitudes of common and uncommon interests—together, so that they can share whatever blows their hair back with one another. When it works, it’s really something to behold.”

Vulcan’s GoFundMe campaign, which is no longer accepting donations, raised $32,942 of its $35k goal. More important, buzz generated by the campaign and its events have made everyday business steadier. While the store now offers membership-support plans as an alternative to a la carte rentals, and its campaign suggested the idea of disc-return slots around town (something the store might still explore), the emphasis moving forward is on events, PR and word of mouth from happy customers. “I’m utterly delighted by the folks who’ve shown up to rent more,” says Knight. “Now, it’s on us to kick ass and keep people wanting to come back and experience this amazing archive.”

About that name: both via email and during our phone interview, Knight reiterates that the name Vulcan Video has nothing to do with Star Trek; neither he nor Vulcan founder Dian Donnell identify as Trekkies. In a tangled genesis story that feels very Austin, Vulcan’s collection originated with a film poster shop (not named Vulcan) that dabbled in home video circa 1985; by 1987, Donnell had purchased the collection and opened her first video-rental shop on 29th Street, which she christened Vulcan Video after a local spot named Vulcan Gas Company—which, in turn, had endeared itself to locals not as a gas company but as a music venue. Put more succinctly: “Dian actually hates Star Trek.”

It’s an origin story that Knight clearly feels compelled to patiently clarify each time he gives an interview about Vulcan—and one I suspect each employee likely tells on a daily basis, as new customers set foot in its remaining location on Russell Drive on the south side of town. It reminds me of how often, here at my desk in Beyond Video, I clarify to customers and curiosity seekers that even though some (but not all) of our volunteers used to work at Video Americain, our collection isn’t the old Video Americain collection under new ownership (even though we did try to acquire that collection), but one increasingly worthy of comparison to Video Americain’s in its glory days that we built from scratch and continue to grow through membership pledges and donations.

Passion projects often have these sorts of tangled origin stories. Here’s hoping that we at Vulcan and Beyond both have to continue telling ours for many years to come.