“VR Can Be So Many Things”: Diversion cinema Co-founder Camille Lopato on Distributing VR 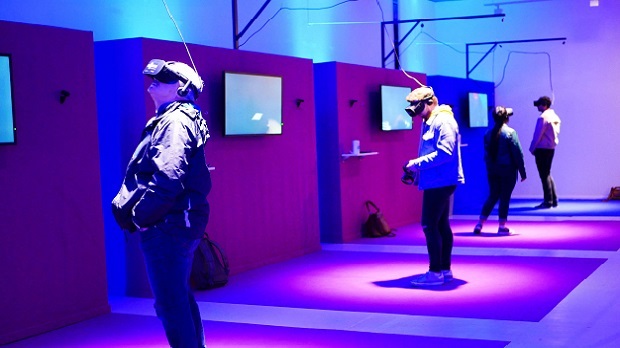 by Randy Astle
in Distribution, Filmmaking, Transmedia
on Feb 27, 2020

Frequent visitors to major film festivals will have spent the last few years tracking the improvement not only of virtual and augmented reality pieces, but also of how they’re shown. Throughput has increased, displays and decorations gone from relatively slipshod to professional, and most recently entire groups of viewers have been accommodated simultaneously in group viewing sessions through synchronized headsets. In the meantime, commercial venues—some permanent, some pop-ups—have sprung up around the globe, offering VR games and films as part of a new wave of location-based entertainment (LBE).

The Paris-based Diversion cinema is at the forefront of developments like these. Founded in 2016 by Camille and Marc Lopato, the company opened a distribution division in 2018 to exclusively handle virtual reality productions. Publicly viewed VR is a whole new experience that lives somewhere between the movie theater and the video game arcade, and, as a distributor working with creators and exhibitors, Camille, Marc, and their team encounter a set of original yet somehow familiar challenges. With creators, for instance, they help craft distribution strategies that can get their work before the greatest possible public and pay the bills in the process; with exhibitors they can assist with designing the space, promoting an event, and handling the crowds (and seemingly inevitable bottlenecks that VR’s single-viewer format creates). As with film distributors, creating and managing the financial pipeline—handling funds from the public up to the content creators—is a major part of the process.

I’ve long wanted to talk with a player in this nascent industry of cinematic VR distribution, and Camille Lopato agreed to answer a few questions about their history and process via email from France.

Filmmaker: Why did you decide to move into the distribution of virtual reality with Diversion Cinema?

Lopato: We entered in VR in January 2016 with the opening of what we called a VR cinema: several people entering a room with swivelling chairs to see a VR program which consists of two to four 360-degree films. The screening starts and ends for all the viewers at the same time. The idea was to offer a collective experience as close as possible to the cinema experience.

Quickly we were approached by cinema festivals, the first being Le Marché du Film in Cannes. We put together a thirty-seat VR cinema for them and from that moment other festivals came to us to have a VR space. Since then we specialised in creating VR spaces for festivals and companies. From time to time we were asked for recommendations or to handle the screening fees. We realized that we were at the crossroads between creators, festivals, and also private companies that wanted to host a VR event. We also discovered VR experiences that we really liked and wanted to promote internationally. In April 2018, we decided it was the right time for us to open a proper distribution department; this is when Paul Bouchard joined us together with Agata Di Tommaso to structure and handle the distribution department.

Filmmaker: What is your process for working with different outlets? I’m curious, for instance, how getting a VR film into a festival may be different than placing it with an LBE space.

Lopato: To put it in a nutshell, there are three different types of venues: festivals, dedicated VR LBE, and cultural spaces. The biggest differences between those three types of venues are the audience and the aim. For festivals, most of the time, rentability of the VR per se is not a need; it is more about getting people’s attention on what is happening during the festival. When it comes to dedicated VR LBE or cultural spaces, the viability of the business model is much more important. Therefore we have to offer not only a VR experience but a business model attached to it: time in the VR experience, space needed, number of persons in the headset, time outside of the headset but being part of the experience, etc. Most of the time festivals and dedicated VR LBE venues have the VR material, but that’s not the case for cultural spaces. So this is also a discussion that we need to have with them to figure out how this investment can be the most sensible and/or cost effective.

Filmmaker: What can content creators do to plan for a successful VR distribution strategy, whether with you or on their own?

Lopato: First, they need to have in mind that a distribution strategy is necessary. And it should be planned at an early stage, long before production ends. How will you show your VR experience? On which devices?  How will you greet the audience? What will happen once the audience takes off the headset? Those are questions that should be answered at the production stage because depending on the answers it may change what happens in the headset. As a creator you should also know that your experience will/should travel and that these costs need to be the most efficient, so you have to think about the need to create an installation, how, at what cost, how you will ship it, if you or someone on site will mount it for you, etc.

As for any kind of project, it is always good to talk about it with people who already handled these issues and already made those mistakes. And then of course, which festivals should be targeted, how to position the project, for which audience, which venues, which platforms, how to handle the communication, etc.

Filmmaker: Last year you said that it may be a long time before VR has mass adoption among the general public and that in the meantime you’re developing alternative distribution outlets. Do you expect that there ever will be a VR equivalent of a VCR, and if not how do you expect the cinematic VR market to grow in the next few years?

Lopato: Well, yes, I still agree with that. We do expect the 360 market to grow—it has been growing since its birth and still is. It is just a bit slower than VR industry wished for. I believe 360 will be a market leader for VR in the coming years as the business model is much more sustainable, devices are getting more stable, and people are ready for it.

Filmmaker: VR has so far found its greatest success with gamers and enterprise applications. Are there any obstacles that are holding back cinematic VR from growing into as large a market as those?

Lopato: Again, it is about the targeted audience and the way we market our experience. For the broad audience, VR is not a thing. It means that we have to market the experience itself, not the technology, and this has a cost. To be sure that this investment will be recouped we need to have a way to scale up our set-ups, offer high end cinematic productions, and be able to renew it frequently. We are not there yet but it seems we are going in the right direction.

Filmmaker: Lastly, can you talk a little more about monetization? What does the arrangement typically look like when a production company works with you or when you work with an exhibition outlet like an LBE venue?

Lopato: It depends obviously on the type of project. VR can be so many things: 360 films, interactive games, immersive theater, dance, etc., and the monetization we foresee will be different in each case. That said, the most common method for us as of now is to provide producers with a minimum guarantee. We start working with a project and we take a commission on each deal made.