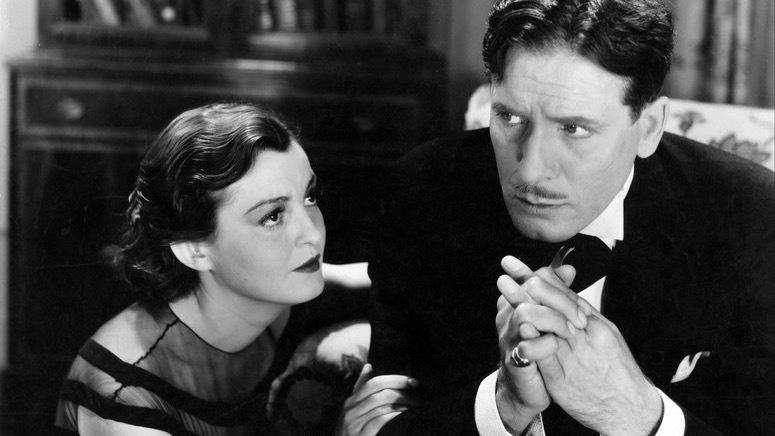 The Sin of Nora Moran

Shifting points of view, complicated flashbacks, elaborate optical effects and a fluid approach to objective reality are not typically characteristic of American movies released in the early sound era, which makes Phil Goldstone’s 1933 picture The Sin of Nora Moran a real discovery. Goldstone was a producer and director who worked on Hollywood’s “poverty row,” the section of studios located around Sunset and Gower that cranked out extremely low budget features designed to fill out the bottom halves of double bills; like Frank Capra, Edgar G. Ulmer, and several other filmmakers who spent all or part of their careers on the row, Goldstone took advantage of his limited resources to exploit the greater creative freedom that came with the lack of financial pressure. The Sin of Nora Moran is a case in point, a melodrama about a woman whose life is sacrificed at the altar of powerful men’s ambitions and desires (she’s forced to go to the electric chair to cover up for a governor and his crony) that is told in a remarkably audacious manner. At a time when many directors were still getting used to the cumbersome equipment required to record sound, Goldstone set his camera free in Nora Moran to convey his heroine’s initial hope and ultimate anguish via a style as varied as the story’s emotional content. A lot of the picture’s resonance comes from the strong lead performance by Zita Johann a year after she worked with John Ford on Tiger Shark and appeared opposite Boris Karloff in The Mummy. Johann left the film business not long after Nora Moran; she was coaxed out of retirement in 1986 by film historian and director Samuel M. Sherman for a small part in his Raiders of the Living Dead, but other than that she only made one film after this one, 1934’s Grand Canary. Her work in The Sin of Nora Moran makes one wish she had done more, but it also makes one grateful for the excellent restoration by the UCLA Film & Television Archive that is featured on The Film Detective’s new Nora Moran Blu-ray, which beautifully showcases both Johann’s magnetism and Goldstone’s visual ingenuity.

An even better (and considerably more complex) take on politics and power, the 1991 drama True Colors, is currently streaming on Amazon Prime. Criminally underrated and overlooked at the time of its release, True Colors’ sophisticated examination of the moral and ethical compromises inherent in the American political system has aged beautifully, its considerable virtues even rarer now than they were 29 years ago when the film was made. James Spader and John Cusack play college roommates whose friendship is severely tested when they both go to work in Washington, Spader as a crusader for the justice department and Cusack as an aide to a senator (Richard Widmark, dynamic as ever in his final big screen role). Going against the two stars’ images at the time, director Herbert Ross casts Spader as the virtuous do-gooder and Cusack as a sleazy opportunist; Kevin Wade’s script further complicates matters by playing against expectations in presenting Spader’s character as a privileged member of the elite and Cusack as a working class outcast whose poverty is anything but noble. In a way it’s a reverse take on the class politics of Wade’s earlier script for Working Girl, a movie that makes a fascinating companion piece to True Colors. Both films are razor sharp snapshots of 1980s social mores (most of True Colors is told in flashback), and in True Colors Wade rigorously explores every possible philosophical ramification of his characters’ behavior. Their relationship serves as an allegory for the values of an era, but there’s nothing schematic or synthetic about the characters. They’re fully dimensional, highly specific individuals played to perfection by Cusack and Spader, and Wade’s impeccably researched deep dive into the minutiae of Washington process provides a vivid backdrop. His rigorous sense of journalistic detail is as impressive as his ear for expressive dialogue and his ability to dramatically explicate profound insights into human nature.

My final recommendation this week is Kino Lorber’s Carole Lombard Collection Blu-ray boxed set, which collects three relatively obscure movies starring the great comedienne. Lombard was one of the sharpest, most charismatic comic actresses in an era where there was stiff competition; in the 1930s and early 40s she starred in at least a half-dozen films that rank among the funniest movies ever made, among them Twentieth Century, My Man Godfrey, Nothing Sacred and To Be or Not to Be. Kino’s package proves that Lombard didn’t need directors like Howard Hawks or Ernst Lubitsch to turn in sparkling work; she’s as brainy and vivacious in these lesser known works – Fast and Loose (1930), Man of the World (1931) and No Man of Her Own (1932) – as she is in any of her more highly regarded classics. No Man of Her Own is a particular delight given the opportunity it provides to see Lombard sparring with Clark Gable, who like Lombard was just on the verge of superstardom at the time. Gable plays a con man and Lombard is a small town librarian who falls for him but doesn’t fall for his attempts to trick her into thinking he’s a solid citizen; their fast badinage is expertly delivered with the kind of precision and flair they would display in their breakthrough performances (Lombard in Twentieth Century and Gable in It Happened One Night) just a couple years later. Lombard and Gable would later become one of Hollywood’s most famous offscreen couples, but No Man of Her Own is their only film together aside from an earlier picture by the same director (Wesley Ruggles) in which they were extras who didn’t share any screen time. It’s a real delight, and equally delightful is the historical audio commentary provided by Film Comment contributor Nick Pinkerton. I’ve become a real fan of Pinkerton’s wry and informative commentaries, which expertly combine scholarship and entertainment – in the case of No Man of Her Own, Pinkerton has supplied narration as smart and fun as the movie itself. Another of my favorite commentators, Samm Deighan, is featured on Man of the World, making the Carole Lombard Collection essential viewing for anyone looking to expand their knowledge of this great actress and the age in which she reigned supreme.