Made with DALL-E-2: Prashanth Kamalakanthan and Artemis Shaw on the Poster for Their Rotterdam-Premiering New Strains 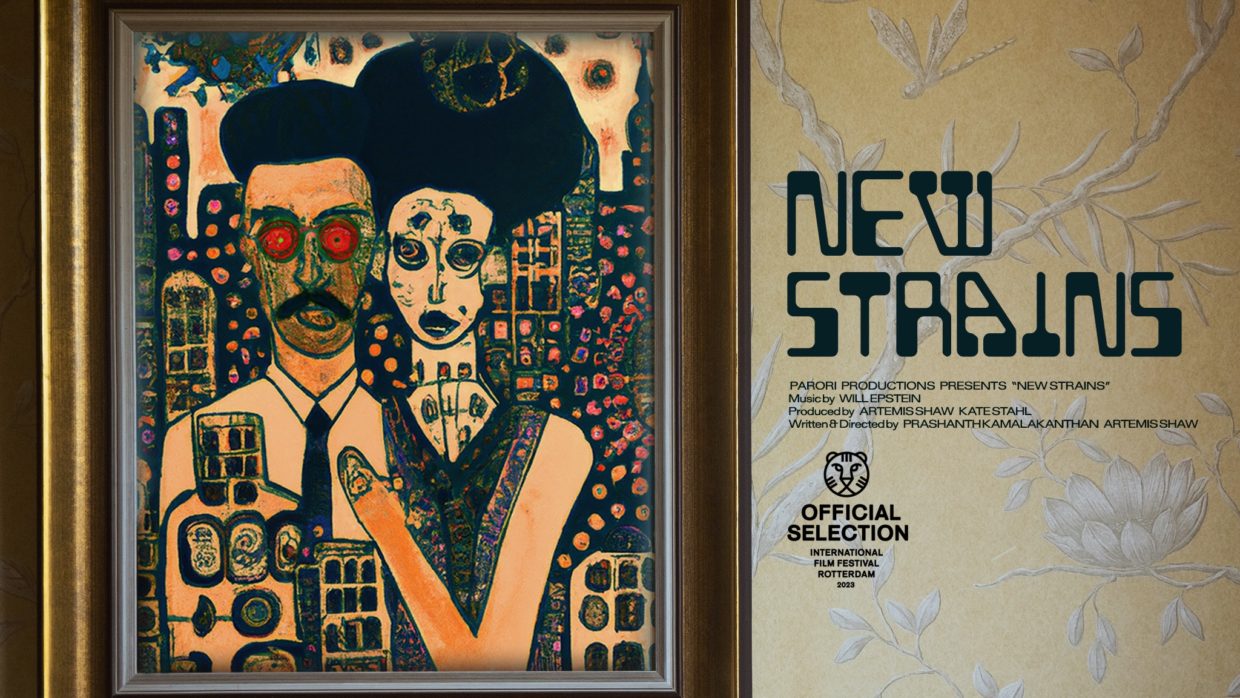 by Scott Macaulay
in Distribution, Filmmaking
on Jan 20, 2023

For their Rotterdam-premiering feature New Strains‘s poster, Prashanth Kamalakanthan and Artemis Shaw knew they didn’t want to use an actual image from their pandemic production, which was shot on Hi-8. And they wanted an image that in addition to being beautiful would formally resonate with the film itself, a story of visiting young lovers (played by the filmmakers) stuck in New York when a travel ban hits at the start of a pandemic. “We were thinking about that sense of being frozen in time,” Shaw says. “In March, 2020, everyone was obsessed with the news, but we were all stuck in our houses. We were interested in how to use paintings, which are often old, still and unchanging, within that context to capture that sense of being frozen, like in amber. And so the concept was our characters turning into a painting that was meshed into the house.” 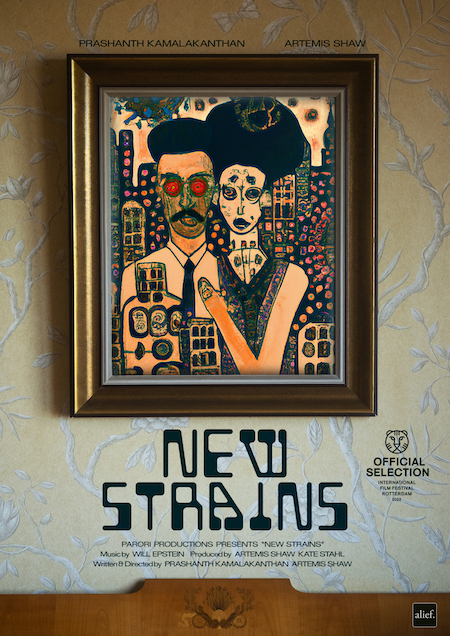 To create the image, the filmmakers, who appeared on Filmmaker‘s most recent 25 New Faces list, made use of generative AI image creator DALL-E-2, a process that brought with it that formal connection to the themes of their film. Explains Kamalakanthan, “There was both a pragmatic and philosophical interest [in using DALL-E-2]. I had been trying to come up with a use case for this tech that seemed really cool and staggering, and I had this poster concept in mind that required a skill set that I didn’t have, which was digital painting. And lo and behold, this tool dropped into our hands.”

“The more we were poking around with it,” he continues, “we were seeing results that were off the mark. We [understood] that AI is itself kind of locked into the past, and so that started speaking to the themes of the film. AI is not able to experience in the present. As a human artist, you’re extremely present and future oriented — you’re always reacting to your present experience, and you project that into a future audience in a future context. AI is doing something very different, and I think there’s a weird tension, a horror, that screams out from the subjects of the painting itself, in a way, which is quite interesting.”

“One of the reasons the whole process worked for us is that we were down for the painting to be uncanny,” adds Shaw.

As for creating the image itself, Kamalakanthan says it involved about 100 prompts. Using DALL-E-2, “You’re shooting a very imprecise kind of bullets,” he says. “A ton of the work is filtering, sifting and redirecting as a human artist. One of our early searches was for an Indian man, and then all of a sudden we had a man in a turban, and I realized we weren’t using DALL-E right. We [narrowed] the search to a specific Indian celebrity who was kind of approximate to me, and then added mustaches and glasses.”

For a stylistic reference, the filmmakers chose the 19th century Austrian painter Gustav Klimt. “We chose him because he was known for portraying the uber rich people of his time, and often female characters,” says Shaw. “Often his paintings would become part of their wallpaper [in their homes], or part of their very expensive outfits.”

After all their DALL-E-2 searches, the filmmakers says, they had about 20 variations of their image and then narrowed them down to three. One became the base and they comped in elements of the other two in Photoshop and added things like a photograph of a frame and the wallpaper.

Kamalakanthan and Shaw’s poster for New Strains is one of the most striking of this festival season’s, its quality affirming the potential of generative AI to disrupt traditional processes of graphic design. “I’m sure it’s going to change the way graphic designers work,” Kamalakanthan reflects, “especially in the early stages of sketching and conceptualizing. But I want to stress that right now AI has a finishing problem — you can’t really create and finish art that has this kind of revolutionary revelatory quality that is future-oriented.”

He continues, “But I do think we are underblowing the profoundly disturbing and chaotic — both psychologically and socially — effects of AI on media. We’ve built a society now where we’re really dependent on photo documentary evidence from IDs to security cams to government PSAs and campaign ads. Unless there’s some sort of regulation, which is doubtful, or some sort of push for media and AI literacy, we’re going to lose touch with any form of consensus reality at all.”