by Scott Macaulay
in Interviews, Producers, Sundance Features
on Jan 20, 2011

Originally printed in our Fall 2010 issue, we asked a number of leading independent producers about their producing models and how they’re finding everything from financing to material to office space. Jay Van Hoy & Lars Knudsen’s latest film, Braden King’s Here, premieres at Sundance on Friday. 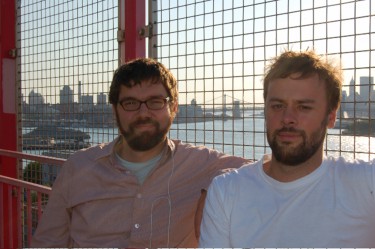 For Parts and Labor’s Jay Van Hoy and Lars Knudsen, independent film success is all about work. Very hard work.

Midway through our conversation about their recent producing successes, Jay Van Hoy and Lars Knudsen realized that they hadn’t had a day off in 18 months. “You did seven-day weeks for a year-and-a-half?” I asked. “Well, there was one weekend during SXSW…” Jay replied.

For Van Hoy and Knudsen, whose Parts and Labor is one of New York City’s most active and auteurcentric production companies, getting films made is simply about doing the work. (And no, a weekend of downtime while attending a film festival doesn’t qualify as “days off.”) The duo’s recent marathon production stretch began in spring 2009 with Aaron Katz’s Cold Weather shooting in Portland. Next up was Cannes and then, for Knudsen, Armenia to shoot Braden King’s feature, Here. Van Hoy planned to go to China with Julia Loktev for her new feature, The Loneliest Planet, but financing didn’t come together and the project was pushed. But in the fall Mike Mills’s Beginners did go into production, shooting up until the Christmas holidays. By then Cam Archer’s Shit Year was in the can too. “We spent the holidays mixing Cold Weather and Shit Year,” says Van Hoy, “and then we had to get Cold Weather ready for SXSW. We were doing post and reshoots on Beginners in L.A. and we had production meetings in Cannes [where Shit Year premiered] for Loneliest Planet, which wrapped [in the Caucasus Mountains of Georgia] on Labor Day. I felt such relief that weekend. Mike’s film was finished too, and I took four days off.” Of course, just days later was Toronto, where the well-received Beginners was picked up by Focus Features in a reported $2 million deal.

Such perpetual motion can only be effective if there’s a partnership strategy behind it. Says Van Hoy, “Lars and I meet twice a week to go through all the films. One of the things we try to do is make sure the work is interchangeable. It’s pretty selfless. I want to make sure Lars knows everything so he can take care of everything [in my absence] and vice versa. Directors often call me ‘Lars’ and Lars ‘Jay,’ and when that happens, that’s kind of a good thing.” Do sneaky directors ever try to play one producer off against the other? “That’s a huge mistake,” says Van Hoy. “It doesn’t work.” The duo also frequently partner with other producers, joining Leslie Urdang, Miranda de Pencier and Dean Vanech on Beginners, for example.

Parts and Labor has a Brooklyn office and also a first-look deal with producer Scott Rudin (The Social Network), for whom both Van Hoy and Knudsen once worked. That helps cover overhead. “We have one assistant,” says Van Hoy, “but at various points [in the last 18 months] we have gone through two other assistants.” Lucas Joaquin and Tory Lenosky have moved from assistants to “junior producers,” with both handling service work and Joaquin overseeing delivery. In order to cover their salaries this summer, Van Hoy rented out his space in the Parts and Labor office as an edit suite for another production, the Alaska-shot On the Ice, and diverted the funds into payroll.

Knudsen says that as the company grows, the projects it is taking on are diversifying, allowing them to employ different financing models. “The films in our past were all ‘equity plus tax credit,’” he says. “But now we are working with several Scandinavian directors and doing co-productions with German producers. We’re working with a Danish director where the financing is already in place. For Loneliest Planet, 45 percent of the budget is private equity and the rest is presales [to ZDF] and a German co-production. For The Wanderers, a film we’re doing with Fellipe Barbosa, we moved the location from Prague to Berlin because we knew we could find a German partner and get as much as half of our budget there. Our partner is now trying to get as much public, or soft, money as they can while we focus on casting. Then we’ll look for the missing equity piece.” Continues Van Hoy, “At that point we can present investors with a waterfall that shows lower risk. And we’ll have feedback from the marketplace in terms of sales estimates.” “We fully expect to be able to shoot in the spring,” says Knudsen. Summarizes Van Hoy about their model: “Be creative about the financing, make films for really low budgets, and do several jobs at once.”

Although Parts and Labor are getting involved in larger-budget projects, Van Hoy says “we fully expect to continue making films at $100,000 or however low the films can be made for. These can be really great experiences, and the productions don’t have to be so painful.” But he also acknowledges that fees on such films are usually “zero, or they just cover travel,” and that “how much money we are able to make definitely affects what projects we can take on. We are prone to take on original films that appear risky, or ‘execution dependent.’ But then something like Beginners comes along, and [its reception] is a vote of confidence. On the page, there were so many ways that film could have gone wrong. But we believed in Mike and the movie. We could see the finished film and got there. Hopefully that leads to other more ambitious films.”