IT’S ALL UPHILL FROM HERE 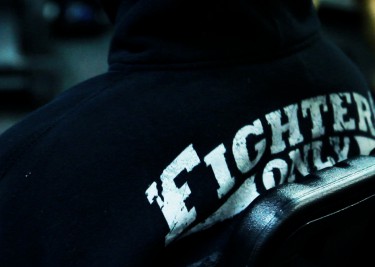 “It’s always a battle. Everything…everyday. It’s like,…can I just get off the battlefield for one day? Step out of the war-zone for a minute?” – Jens Pulver from JENS PULVER | DRIVEN

This confession from Jens has rung through my head almost daily over the past year as I’ve worked to make, complete and subsequently market and release our film, JENS PULVER | DRIVEN. With the film being fully crowd-funded, having garnered festival play and just released nationally on nearly every major VOD network in North America it can be legitimately counted as a marked success in the micro-budget independent feature film world. Though, the day to day efforts put forth to get to this point do at times give one pause and beg the question, “at what cost?” Nearly 7,000 hours and over 21 months committed to this film, and the work is still far from done.

This is not meant to be read as a complaint, rather an honest contemplation of what it actually takes to see an endeavor like this through until the end when that ending point can be elusive, at best. There are many times along the way that you stop and realize exactly why so many give up along the way, or why so few truly, and fully, embrace what is currently described as DIY, and why those who can, many times, hand their films off completely no matter the content of the deal as they receive one thing that those of the DIY stripe never do…a definitive end.

I’ll be honest in that I truly did not know all I was getting into when I began this film, I simply proceeded headstrong in my belief in Jens, his story and the way in which I wanted to tell it. I was aware enough of the scene around me to understand that the ‘heyday’ of indie film had come to a close and that no matter what making this film, or any film, and ultimately getting it seen would be a battle. What was surprising, and encouraging, was how along the way a whole new world, or arguably a resurrection of and an old world indie aesthetic, took hold with numerous artists like myself deciding from the get go to take the reigns and see their work through until the end. Though, I think for many of us, the actual ramifications of this were daunting, if not completely disheartening.

For me this meant, in addition to being a producer, director, DP and an editor, also taking on the work of promoting and marketing the film, including design, web coding, product design and more, contracting and managing the entire production and post, including product manufacturing and creating deliverables for domestic and foreign releases, self distribution both of digital and tangible goods, customer service, responding to fans and responding to haters, or responding to every person that hinted at wanting to help or be involved and keeping a strong mental stamina when 10 times out of 10 they never came through, setting up and managing your own fulfillment, packing a thousand DVDs and envelopes by hand, fulfilling Kickstarter rewards packages, seeking out distribution partners, and yes, constantly trying to raise funds (a task which is never done)…all culminating full time non-stop work. Every day. All day.

Even now, with DRIVEN screening at festivals and community run events, and visible on the likes of iTunes, AmazonVOD and many similar platforms while garnering very good viewer reviews it’s still a daily battle to sustain momentum and continue to bring new audiences to the film. That is our new reality as working (class) filmmakers. Our work does not end once we’ve locked picture, it truly just begins. And, while this reality is enough to make me a complete basket-case at least twice monthly there is an excitement that resides in the knowledge that you have true ownership over your work and its destiny, and that its success is truly your own at the end of the day.

These are the things which are never really discussed in pragmatic terms in the panel-driven, self-help culture that has risen in tandem with this new empowered filmmaker movement. No matter how many successes, case-studies, social media metrics, or new tools, etc., etc. are presented in this on-going conversation of ‘how to’, the bottom line is like the making of the film itself, its success or failure depends on you and whether or not you can sustain your efforts for the long haul, not just for each individual film, but in the continual creation of a body of work.

While we now find ourselves in an incredible time of connectivity and supposed digital triumph we still weigh ourselves against the old guard, especially those now re-embarking in this ‘new’ movement away from the studio career path and toward a direct to fan culture with an eye on cutting out the middle man. While it’s great to witness, read about, and champion the recent successes of the likes of Kevin Smith, Edward Burns and the Polish Brothers it’s important to keep in check (while certainly not dismissing their own individual hard work) that the cultural cache that they now carry into these recent works and what makes them immediately news worthy, was helped along by years of attention in part generated directly by the deep pockets of the studios and middlemen they are now shifting away from. Ultimately, we cannot expect duplicate the successes of others, or even our own past successes, we simply learn from them and try to do better.

So, that is our task for the next one…and the next one, and the next. Learn from our own (communal) multitude of failures and successes and carry on with at least the knowledge that the road ahead will indeed be an uphill battle, just hopefully with a slightly less dramatic grade then the previous time around.