Director Matt Osterman on Ghost From the Machine 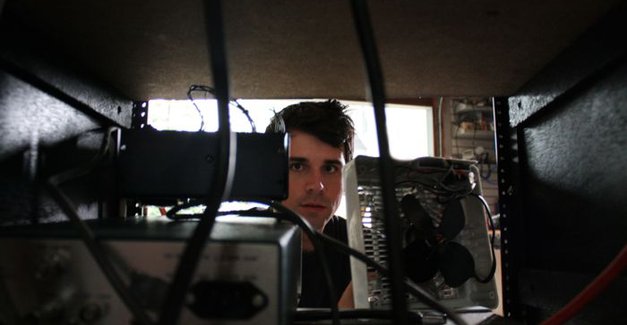 by Eva Hill
in Directing, Directors, Filmmaking, Interviews
on Nov 9, 2011

When Matt Osterman attended the IFP Narrative Lab a few years ago, his $25,000, science fiction/supernatural thriller, about a grief-stricken man who builds a machine to communicate with the dead, was titled Phasma ex Machina. But when the film was finished and released this summer on DVD and, later, iTunes and Netflix by Screen Media, it went under the less obscure title of Ghost from the Machine. Now, however, another name change is in the works. This August Universal Pictures acquired the remake rights, attaching Gary Shore and Nathan Parker to write and direct. The new film will be called Our House, and I interviewed Osterman about his inspiration for the film, his involvement in the new picture and what advice he would give to other filmmakers contemplating remake deals.

Filmmaker: How did you get started on Phasma, and how did you go about acquiring distribution?

Osterman: The film was shot in Minneapolis-St. Paul at the end of 2008, and it was all local cast and crew. We shot for about $25,000 and were in post for about three or four months. I had a rough cut, so I took a break and did a trailer. It blew up online and our crew, including producer Jennifer Kramer and co-producer Jon Maichel Thomas, weren’t really ready for it. It was on more than 20 websites in Spain, Poland, Japan and France, and we had a ton of industry folks contacting us, but we only had rough cut at that point. So we attended the IFP labs in New York City, which was amazing, and we learned a ton. The movie itself didn’t change, but we learned a lot from the industry side. We screened at Fantasia in Montreal, a genre festival, and we had a sales agent and producers rep. and they began shopping for distribution. We decided to go with Screen Media, and we had an international distributor come on board.

Filmmaker: When was your original version of Ghost From the Machine released, and how did Universal gain interest in it?

Osterman: The film came out on July 26, 2011, and was officially released a couple of weeks ago on VOD, at retail outlets and our website for filmmakers. We’re selling T-shirts and posters; trying to make our money back. Meanwhile, the producers rep. found interest in a studio remake. As long as we got to keep our original movie, that was OK. Universal stepped up to the plate and is going to try to remake it for some serious claim. So it’s an odd situation. The movie just came out and the movie has so much broad potential. It can do well, it’s making its money back, but it’s not going to be a summer blockbuster. Universal thinks there is potential in the market, and they’re brining a team together, including Nathan Parker, who wrote Moon. I get to see what they come up with, and it will be surreal. They’re going to change some things and I’m OK with that.

Filmmaker: What intrigued you about the subject of science fiction and the paranormal, and how did you get the idea for the film?

Osterman: I’ve always been interested in science and the paranormal – life has some mysteries. If the supernatural were to exist, would they do that to magic or follow the same laws of the universe that the rest of us do? So I did a ton of research trying to connect them. There are people in the field right now doing research about ghosts and their manifestations. I crafted the science background and put two and two together. The film was originally titled Phasma ex Machina, a small, low-budget indie. We knew the name of the film would fly. There were no similar movies with a title like that. Then the distributor came on board, and said if it’s in a list of titles in Redbox or something, it will scare people away. So, ultimately, we went with the translation, Ghost From the Machine. Our House is the tentative title of the Universal remake, but that’s a work in progress.

Filmmaker: What is your level of involvement in the project Universal is currently working on?

Osterman: I’m in the loop, but I don’t have any decision-making power and I don’t want it. I’ve made my movie and I don’t want to be making the same movie for 10 years. I don’t need to go in and stir the pot, but I’m a friend of the producers at this point, so I know it’s in good hands. We are in a very odd situation, but we feel extremely lucky that we can have our cake and eat it, too. Our investors will get paid back. More than likely, the remake won’t be out for several years. They’re doing the rewrite now, so it depends on the script and when they’re happy with it. It’s still a modestly budgeted picture, and filming will start once they’re happy with everything.

Filmmaker: What advice would you give to filmmakers who are preparing to have their film remade?

Osterman: It’s kind of a lot of questions. We kind of went through it trying to figure out the best scenario. Nobody really makes his or her movie intending it to be remade. If I had gone to the studios with my script, they would have passed. It took our making the movie to show people. From a writer’s perspective, don’t ask for permission. If you have a script you really love, send it around and get rejected. Don’t ask for permission – just go do it. We were pretty lucky. You don’t know unless you try, so go do it and it’s fun. You get to play in the sandbox.