Goats might be Chrisopher Neil’s first feature as director, but he’s worked for years as an acting coach and rehearsal adviser on projects as wide ranging as Adaptation, The Virgin Suicides, and Star Wars: Episode 3 – Revenge of the Sith.  And it’s clear that Neil has accrued quite a stellar reputation among actors, as evidenced by Goats’ impressive ensemble (which includes David Duchovny, Vera Farmiga, and relative newcomer Graham Phillips.)  Based on the quirky debut novel by Mark Jude Proirier (who also wrote the film’s screenplay), Goats is an odd but bittersweet coming of age story. 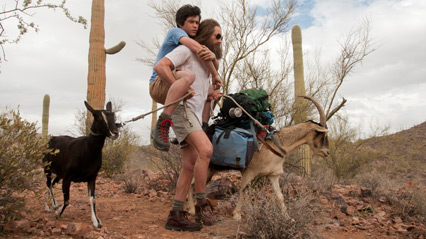 Filmmaker: How did you first come across Mark Jude Poirier’s novel? What were you first impressions of it?

Neil: I stumbled across the Goats novel by reading a review of it in the New York Times.  My first impression was, “How the hell did this guy know and write my story?!” It was spooky. There were/are so many similarities between Ellis’ story in the novel and my own childhood. In fact, I grew up on a goat farm with a goat-herding step-father and a new-age mother. I ran to the bookstore to buy it. After reading about twenty pages, I knew I had to make it into a film. I showed up to my first meeting with Mark Poirier with my dog-eared copy of the novel in hand and we hit it off. He said, “You know this book better than I do.” I optioned the book myself and that’s how it all began.

Filmmaker: Proirier also wrote the screenplay. How intimately was he involved in the production and post-production processes?

Neil: Mark adapted it and we’ve had a strong, collaborative relationship from the beginning. I still love Mark’s novel as much as the day I first read it, and I wanted to honor it at every step of the filmmaking process. We worked closely on every draft of the script. Mark, who’s from Tucson where the story is mostly set, even took me to the real locations from the book. I also encouraged every actor to read the novel. We were all inspired by it. We spent much of our short rehearsal going through the novel, talking about ways to bring even more of its details into the film. Mark was there during shooting and I welcomed his input. Although he often cracked up during takes, which would in turn make everyone laugh. I invited Mark to sit with me during post and found his feedback was very helpful.

Filmmaker: What kind of audiences do you see this film connecting best with?

Neil: I hope that people my age (early 40’s), whose parents are children of the 60’s, connect with the film. I think there’s a collective experience unique to our generation. Our parents who, in essence, threw off responsibilities, both practical and emotional in their youth, never entirely re-assumed them once they had kids.  I think this film accurately and honestly portrays the reality of growing up with child-parents. All that said, there’s a very youthful quality to Goats that I hope will draw a younger audience as well. It’s a teenager’s story and the film has a wonderful, young cast. Graham Phillips, who plays Ellis, carries the film quite effortlessly.

Filmmaker:David Duchovny is an actor who always seems eager to reinvent himself, or at the very least mess with the public’s perception of him. What did he bring to the table in this role that you didn’t expect?

Neil: That’s just one of the many things I appreciate about David as an actor.  He also has a remarkable ability to create a separate rhythm for his character within the scene and story. It’s a timing and an energy thing that is all his own. It’s his leading man quality, I suppose. It’s what makes him so perfect for the Goat Man character. Goat Man moves through life in his own time. It’s a much slower clock. I knew David would nail that aspect of the character. What was unexpected for me, was the amount of heart and the degree of innocence he imbued the character with. I’ve always been endeared to Goat Man because of the parallels to my own life, but I love the character more than ever because of the David’s performance.

Filmmaker:What did you learn making Goats that you plan to carry on to your next project?

Neil: No matter how big or small the film, there has to be a strong personal connection to the material. Oh, and never make another low-budget film at high altitude. It’s exhausting enough at sea level.