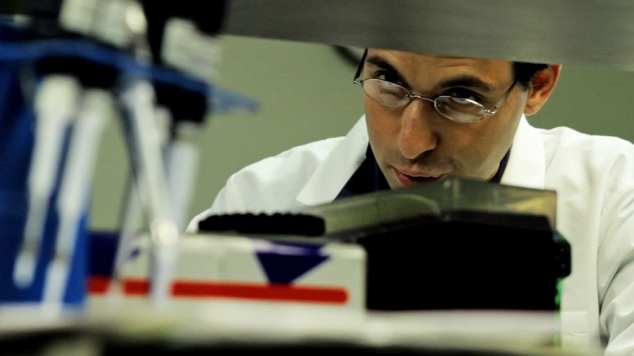 by Jane Schoenbrun
in Directing, Directors, Filmmaking, Interviews
on Apr 16, 2012

Over the last few years, actor Alex Karpovsky has slowly grown into one of the most recognizable faces in American indies. And with a recurring role on Girls, Lena Dunham’s upcoming HBO series, he stands poised to break through to a wider audience. As if he wasn’t busy enough, Karpovsky has found time to migrate behind the lens for Rubberneck, his directorial followup to 2009’s Second City improv documentary Trust Us, This is All Made Up. A psychological thriller about an unhinged scientist (Karpovsky, directing himself) who grows increasingly obsessed with a co-worker he’s recently had a one-night stand with, Rubberneck premieres this Friday as part of the Tribeca Film Festival’s Viewpoints section.

Filmmaker: How did you conceive of the character of Paul? What kinds of themes did you hope to explore through him?

Karpovsky: Garth (co-writer and producer of Rubberneck) and I wanted to make a subtle, slow-burning psychological thriller where unreciprocated desires and perverse secrets throb well below the surface. My father is a scientist and I grew up around a lot of scientists. Though it’s a generalization, many scientists are quite introverted and reserved. Paul is a very withdrawn researcher at a laboratory on the outskirts of Boston, someone who keeps his feelings close to himself and who buries his wants, frustrations, and history quite deep. By focusing the story on him, we felt we could explore the themes of obsession and sublimated desire in way that complemented our initial interest.

Filmmaker: What was the writing process like? Was working with Donovan different from some of your previous collaborations?

Karpovsky: I’ve never collaborated with a writer on a film before. It was truly great, and I hope to collaborate much more in general on future projects. For me, it kept the writing process fun and helped preserve perspective on the big picture. That’s something I surrender easily when I write alone, tending to lose myself in peripheral caverns for a detrimental period of time.

In terms of the actual process, we tinkered with the macro and style settings on Microsoft Word to essentially create a crude index card software (I’m sure something like this already exists, but it seemed easier to just tweak a program we knew). Each scene would be a card (color-coded based on theme or participants), and by zooming out, we could see the entire film on Garth’s big TV as a series of cards. Thinking of the story and the arcs in such a visual way was very helpful. Whenever we would get stuck, we would zoom out and just stare at the whole grid for a few minutes, and it usually helped.

Filmmaker: Do you approach acting differently when you’re also the one behind the camera? Which do you find easier – taking someone else’s direction or directing yourself?

Karpovsky: Well, I’m physically in front of the camera for 95% of the scenes in this movie, and when you’re in front of the camera and the action starts, the approach is no different than it is for any other project. I’m not a “method actor” in any sense of the phrase (though I certainly respect the approach, please don’t get me wrong) and that makes things a lot easier when it comes to hopping back and forth on either side of the camera. I can’t imagine Daniel Day-Lewis directing his own work without some serious adjustments having to be made. When I act in my own movies I don’t think of it as “directing myself”.

In short, I (hopefully) have a pretty clear idea of what I want from a scene, performance-wise. I try to focus on very little else except that idea during the few brief seconds of a take – “let’s try and forget about the fact that our equipment truck broke down this morning and one of our female leads has a heat rash on her neck.” When I act in other people’s films, my main responsibility is to understand what the director wants, as much as I possibly can, and then do my best to deliver it. Sometimes things get lost in translation and it takes a while to figure out exactly what the director is looking to get from me, and sometimes I never do. That doesn’t usually happen when you direct yourself.

Filmmaker: What do you hope audiences will take away from Rubberneck? Is the film meant to unnerve?

Karpovsky: I hope audiences come away feeling different than they did ninety minutes earlier. Unnerved to be sure, but I also hope they come away percolating upon the ways certain specific childhood experiences can fundamentally define who you are and what you protect –  and all the perverse, muted, tortured and misguided struggles that emanate from it.

Filmmaker: What are you working on next? How do you plan to balance your dual career as an actor and a director moving forward?

Karpovsky: If HBO picks it up for another go-around, this summer I will be returning to the set of Girls as Ray Ploshansky. Next week I will be playing Marty Green in the new Coen Brothers film. I’ve also just written and directed a new comedy called Red Flag, which we hope to premiere over the summer. I hope to shoot my next feature in the late fall. I really enjoy acting, very much, but the semi-surrender of control and the waiting around sometimes gets me down. When it reaches a point that begins to scrape at something that feels unbearable, I like to try and think about making something small and loose that nurtures spontaneity and affords me full control. Sometimes these thoughts spill over into a production that may solidify into an edited film down the road. Sometimes they elegantly codify into a cozy nap.