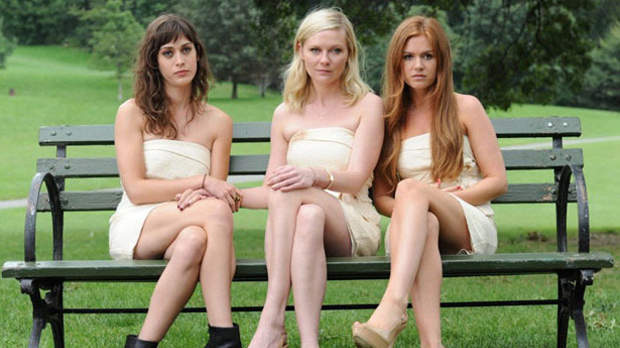 by Miriam Bale
in Directing, Directors, Filmmaking, Interviews
on Sep 7, 2012

Tall and part blonde/part brunette, Leslye Headland darted into our interview and gave me a warm greeting and an intense gaze. She explained that she had just run across town in Manhattan to walk her dog in between interviews while promoting her debut film, Bachelorette. The film is based on her stage play of the same name, about a gang of attractive girls (Kirsten Dunst, Lizzy Kaplan and Isla Fisher) behaving badly before their friend’s wedding. I ask what her dog’s name is. “His name is Ramius. Which is Sean Connery’s name in The Hunt For Red October,” she says, deadpan. “My life is littered with film references.”

After leaving a job as an assistant to Harvey Weinstein, Headland moved to L.A. to pursue writing full-time. To help supplement her savings, she got a job at a video store, where she was the only woman surrounded by “cutthroat film nerds.” So she made her specialty, not highbrow film culture, but the “spicy crowd-pleasers.” She said if someone asked for a recommendation, she’d go through the filmmakers she liked — Hitchcock and Cassavetes and Scorsese — but if they wanted to see something new, she’d recommend films like Zemekis’ Death Becomes Her, Polanski’s Frantic, or George Roy Hill’s A Little Romance. “Spicy crowd-pleaser” is also a good way to describer her film, and her approach. Though she is a die-hard cinephile, she said she didn’t want to make a movie just for movie people. Filmmaker: You wrote the screenplay at the same time as the play, right?

Headland: Yeah, I did.

Filmmaker: One scene in the film that’s obviously so drastically different from the play version, is the chase across New York in the third act. It’s definitely cinematic. It reminded me of some movie, but I can’t think of what. Was there one movie in particular you were thinking of in the way you devised that scene?

Headland: There was! It was What’s Up, Doc? by Peter Bogdanovich.

Headland: I love that movie so much. What’s Up, Doc? is another movie that I would recommend a lot. Actually most of the movies that I watched in preparation for this were movies I used to recommend at the video store. After Hours, too, was another inspiration. My d.p. kept saying, “Don’t you want some ‘New York’ shots? Like Shame.” I think shoots New York beautifully, but my New York is like the After Hours New York. Shooting illegally on the subway, and in a strip club that’s a real strip club, not a set.

What’s Up, Doc? was such inspiration for this movie, too, because you had this huge ensemble cast. And on a big studio movie, they can have a master and then coverage, coverage, coverage… But [that’s not possible] when you’re shooting in 23 days on a very small budget. What Bogdanovich does very well in that film is doubling, tripling and quadrupling of coverage. So I watched it a bunch of times to see how he did it. And a lot of the scenes in Bachelorette are one scene that turns into a different scene. Like a three-person shot that turns into a six-person shot that turns back into a three-person shot. We had to get super creative, and say, “Look, we’re going to do this in a two-shot, but we’re going to do her in a single. But we’re not going to cover you in this shot, but because we won’t use it, we’re only going to use you two together.”

And the actors were really understanding of this. And they’d speak up too, and say, “Well I think I need this kind of coverage.” And I was always open to that. Adam Scott even took me aside at one point and said, “You actually want to shoot this part over here first, otherwise you’re going to have to go back again.” They were constant professionals! Even scheduling-wise, they would drop hints, and say “Why don’t we shoot that part now?”

Headland: Yeah, coming from theater, I would think they would want to shoot as sequentially as possible. And most of the time they do prefer that, but they’ve all done studio movies and they’ve all done independent movies, so they were so helpful and so supportive. Which I don’t think happens a lot with people’s first films! I just happen to have really amazing people who were really super into what we were doing, and they weren’t into challenging me in a negative way. I think they could all tell I knew what I was doing, but I was going to need a little help on some of the basics.

Filmmaker: Maybe because they’re so established, they’re successful enough to be secure.

Headland: Yeah, they’re really secure. I was the newbie. For them to reach out and make suggestions, or even just compliment me, it was really great. Isla would say, “That was really smart the way you set that up.” So they’d give me positive feedback, too.

Filmmaker: I was reading a review that complimented Isla Fisher’s performance in this and compared it to Wedding Crashers. And I thought, has she not had a significant comedy role since Wedding Crashers? Which was like her breakthrough role!

Headland: That can’t possibly be true.

Headland: Yeah, I think you’re right. I think that’s more about the roles that are going around. When I watch her in this film, when I was watching the dailies I thought, “Oh my God, she’s Marilyn Monroe.” She’s beautiful, she’s sexy, and she’s playing dumb. And it takes a smart woman to play dumb. That’s why I think Marilyn Monroe is one of the greatest actors of all time. Because you have to be sharp as a fucking tack to pull that off. Some of my favorite parts of Isla’s performance are when she’s not actually talking, when she’s just looking at the other characters and just trying to figure out what is going on.

Filmmaker: And Kirsten Dunst is so good, too. She’s so scary!

Filmmaker: It’s like you did everything that’s against the rules for women. You can’t be funny and sexy. And you can’t be scary. And you can’t end up alone. That’s what’s totally revolutionary about the movie, that the main character ends up alone. It’s not even an issue; she’s just just too scary! But it makes her a really good friend.

Headland: That was a breakthrough for me when I was writing it. I was at the mid-point of the film going into the second act, and then they go into their multiple storylines. They’re essentially three love scenes: Jenna and Clyde, and Adam and Becky, and I realized, oh her love scene is with Becky [Rebel Wilson]. And that was the breakthrough when I realized that her scene was going to be with Becky. And it’s sort of played that way, and lit that way, and shot that way, too. The sympathy and empathy that they’re having between each other about something that’s really kind of harrowing, and it’s this trauma and history that binds them together, not how they’re acting today.

Kirsten’s performance is so subtle, too. She gives you so little and yet so much. And that was so different than directing theater, you know, where it’s got to be seen from back there. And you’re working on it for weeks and weeks. But someone like Kirsten who has been working for so long… Someone was asking me today why I was a fan of hers. But anyone who can do The Virgin Suicides and Bring It On! within a year of each other, is someone who’s a genius. In the same way that I would compare Isla to Marilyn Monroe, I think Kirsten is Barbara Stanwyck. And I just don’t think people write roles like that very often for women. I mean, I think women do, but whether or not they get produced or funded, I don’t know.

I would say there are male directors, too, who write women characters who I really love. One that Kirsten and I talked about a lot was Sharon Stone in Casino. And if I talk to men about Casino, they often sort of pooh-pooh her storyline. They say, “Yeah, without Sharon Stone it would be a perfect movie.” And I’m like, “You don’t understand WHAT you’re saying to me; that’s the whole reason I love that movie.” And Kirsten was saying that she never read a part like this that’s just so unrelentingly real, and just dares to be…. unlikable is the wrong word. That just dares to be, daring, I guess?

Filmmaker: She doesn’t try to please.

Headland: Another formative moment for me was in another Scorsese movie, when Karen’s voiceover starts in Goodfellas. I actually paused it, I think, when I was watching in high school. She says that he gave her the gun and she knew she should have run, but she had to admit it turned her on. And here I am, a 16- or 17-year-old virgin, and I don’t know what it is to be a gangster, but I know what that impulse is. I know what it is to be attracted to danger, to be attracted to something that’s wrong for you. Even though you know intellectually that it’s a bad idea, you’re emotionally still acting on it. And for a man to understand it, and put that in a film! I think that’s something really exciting.

Filmmaker: To pause a genre film, and then hear it through the woman’s voice.

Filmmaker: I’m curious, you knew she was a genius, but was there some specific past performance of Dunst’s in which you saw her capable of being so mean?

Headland: It’s not necessarily based on another performance; it’s just that I knew she was good. Even before we cast Kirsten — and the only reason she didn’t come up right away for me is I didn’t think we could get her — but we were brainstorming about actresses, and people were pitching women from the comedy world, but I said, “You know, who’s been crying all year? Who’s been stuck in a drama film for the last two years?” So when Kirsten’s name came up I said, “That’s it!” You have a dramatic actress who hasn’t done comedy in a while, and so you have somebody ready to take a lot of risks.

Filmmaker: Because she had been crying all year, you wanted to break through that?

Headland: No, just someone who had been working on dramatic stuff for a while would be more game to understand the comedy through the character, and not try to play the comedy of Regan. What makes Regan funny is not that she tells a joke, but that her worldview is so wrong. So you have to have a dramatic actress who will completely and utterly commit to that in order to get the joke. Some of Kirsten’s funniest lines are actually improvs from her, but they’re not told as jokes, they’re told as, this is actually happening. Adam McKay said there’s nothing funnier than being pompous and wrong. And I think Regan’s a kind of extreme feminine version of that brand of comedy, and that she’s just so wrong.

Filmmaker: There’s one more movie I’d like to bring up. One scene from Boogie Nights kept coming to mind while I was watching your movie, that scene where they’re doing cocaine and Heather Graham says to Julianne Moore, “Will you be my mother?”

Headland: Yeah! They watched that scene, I think. Lizzy emailed it to both of them, and I think they watched it before we shot.

Filmmaker: It’s the greatest drug scene ever. And your film is kind like an extension from that moment.