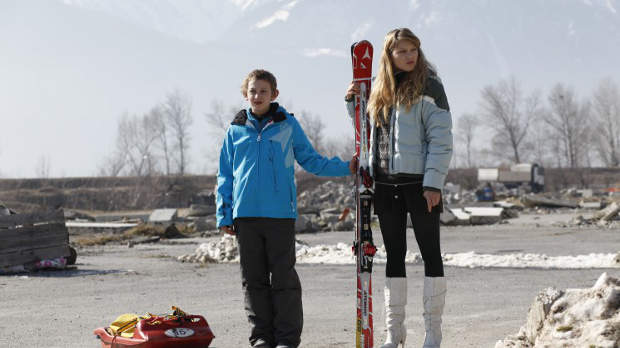 Switzerland’s submission for the best international picture is Ursula Meier’s Sister, starring the stunning and earthy Léa Seydoux as a Swiss hot mess and Kacey Mottet Klein as her weedy 12-year-old brother who supports them both through petty thefts. It’s a subtle, complex film that avoids obvious polarities of class, family, even landscape. As director Meier said to me recently of the mountain resort setting, and about finding her way into the script by focusing on the location of the ski lift cable cars, “It’s the place where he belongs, between two worlds. And it’s also the rhythm of the film, this coming and going.”

This is Meier’s second feature film and also her second film made in collaboration with the renowned cinematographer Agnès Godard. Meier describes her first meeting with Godard to discuss her previous film Home: “I met her in a cafe in Paris for the first time, and normally when you meet people like that, it’s one hour or something like that. But instead we had a discussion for FIVE hours.” It was a revelation, she said. “It was a, how do you say, a meeting of minds, we recognize ourselves in each other.” When asked if it was five hours of technical talk, she shakes her head. “No, I asked her a lot of questions. I asked her to draw the house, as she saw it, and it was very fascinating. She loved the script so much. We spoke about everything: philosophy, art, cinema, photography. And she’s worked of course with Claire Denis, Wim Wenders. She’s such an incredible cinematographer, but also a great friend now. So for this film, of course, we decided to work together.”

“The attraction [to this project] was the drama and Ursula equally,” said Godard. “To work on Home was such a pleasure, to meet Ursula has been such a rencontre. Working, thinking together remain an emulation constructed around cinema. I admire her capacity to invent fiction.”

I had a chance to speak with both women about their experience working on this film, the first that Godard had shot on digital. 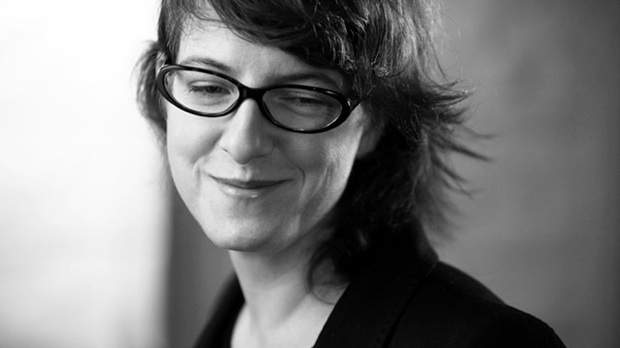 Ursula Meier: Now digital is not just a question of budget, because you just don’t have any choice any more. But for Agnès it was very exciting, because it was her first digital film, so it was a challenge, I think, for her. And it was not easy because it’s in the snow, and snow in digital is terrible.
Filmmaker: Oh, because it’s too bright?
Meier: Yes, it’s very difficult with the whites. So it was not easy. It was a big challenge for her, so my place was very interesting. I was along side her to see how she experimented, all the questions she asked herself. So I was very close during this research process. It was an interesting place for me to be in, to watch this big cinematographer discover a new process.
Filmmaker: Fascinating.
Meier: Yes, and we spoke a lot and watched a lot of digital film.
Filmmaker: What did you watch?
Meier: For example, Drive, which is a very good film for digital. You have something very cold in digital–control–and in Drive it’s so clever because you have a character with no emotion on his face. With Agnès, we had a lot of discussions, because we can’t shoot as we would 35mm. The camera movements don’t look exactly the same and you have to do something very different. She’s thinking very differently on this film; for example, she used color [lights in some scenes] and if it was 35mm she would not use color in that way. For example, in the beginning of the film, she used blue light when he is cutting down the Christmas tree, and also in the background when he is waiting for Louise.

Filmmaker: For the outside scenes?

Meier: Yes, exactly, it’s not realist. I showed her a lot of photography and she showed me a lot of photography, and we had a discussions about what is a  close-up in digital–it’s not really the same, the way the skin is rendered..
Filmmaker: So you avoided close-ups?
Meier: No, she changed the light. She would not do the same that she would do in 35mm.
Filmmaker: It’s interesting that you describe digital as cold, because her cinematography, in this and other films, is not cold at all.
Meier: No! In the skiing scene, for instance, she tried hard that it would not look like a digital film. She didn’t want that, but she didn’t want it to look like a 35 mm film. She wanted to find something particular, and personally I think the film looks very singular. She tried to do something very unique with this film. Sometimes you can tell right away that it is digital, and she tried to go against the grain of what everyone thought about digital, and find her own way. So she did a lot of experimenting.
Filmmaker: With the lighting? And also with taking different digital elements and putting them together in the frame, to create a new landscape?
Meier: Yes, exactly. My first film, Home, is really a fable; it’s not so realist. And in this one, at the beginning, it’s more real. It’s a real location. But for me, it’s also a fable, not so obvious or definite. And in the writing and in the cinematography, we really tried hard to go against the cliché, and detach ourselves from a naturalistic reality. We tried to go against the misérabilistes in this tower where they live; we didn’t want to emphasize the poverty, for instance.
Filmmaker: Yes, it is like a fairy tale. Instead of the “ugly” side of this picturesque,  it is like the “other” side.
Meier: Right, that’s it. So we tried to go against the cliché. And in the ski station, we also didn’t want to show how rich it is, how beautiful, with all the beautiful mountains and the rich people. But we don’t do that. We are from the view of this little worker ant, who is in the toilet. We are in the most beautiful place in the world with Mount Blanc, and I shoot two toilets in one minute! Then at the end, when he is alone and the snow is no more, I told Agnès for the first time he looks at the landscape.
Filmmaker: And the snow is melting?

Meier: Yes, and it’s the end of the world. He’s in the chairlift, between two worlds. And he cries for the first time, like a child. And you can see how beautiful it is, but it’s too late. 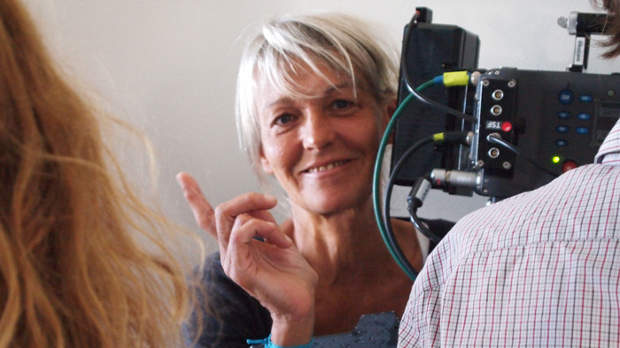 Filmmaker: Agnès, did you have to go out of your way to avoid the picture postcard beauty of the mountains and the snow of this picturesque Swiss landscape?

Agnès Godard: I did not go out of my way to shoot this impressive landscape. First of all, because I have always tried to avoid “picturesque images.” They are too passive. Images in a film belong to the point of view of a director or characters of the drama. So it is necessary to look for something singular, unique, following this goal.

Then, the first time I went to the ski station, one year before we shot, I realized that the difficulty would be to avoid postcards, so it was the first subject we talked about.

When we were about to shoot the end of the film I discovered the landscape without snow for the first time. It was amazing: splendor vanishing… it was so much in harmony with the story. Mountains were still so powerful though inspiring mother nature’s decay. That is why we use a very wide lens, the only one in the film : to face that scenery knowing it was going to be born again.

Filmmaker: While the landscapes are mostly from a distance and stationary, the scenes between Louise and Simon are very intimate and loose. (The camera is often so close that it’s like another member of the family.) What was your approach to this contrast?

Godard: The approach of filming those characters, the actors belong to the script, the mystery of their individualities : they are unable to meet and share each other. It is a very intimate, heavy and painful story : a mystery. It should be possible but it is not..

So the choice was to be as near and as far in the meantime, representation of this irreductible reality force, the impossibility when everything should play the opposite way. I am very happy you felt the camera was like another member of the family, that is something I feel or tell to myself while filming sometimes but never dare to confess till today…

Filmmaker: Were you at all influenced by casual family photos in the way you shot the family scenes?

Godard: Family pictures have a big role in my own story, I believe it is the origin of the choice of this job. I don’t think about it anymore…except with Ursula. Her writing, her ideas, so right to the point, make me think it comes from family experiences, observations with a particular sensitivity.

Filmmaker: Can you tell me about your approach to shooting cars? We see them from a distance, coming and going. When we finally inside one it is shocking.

Godard: Cars were like a metaphoric object, the proof of a better way of life, the house of “happiness.” Seeing them from far away was like giving a materialization of the dream. The only sequence inside the car is related to the plot of the story, the revelation, the hidden inside of the characters.

So it was not necessary to set visually the [setting of the] car, anyway the sound will tell. We had to be inside their head, their mind, their love/fiction/drama. That is why we chose to fill the screen [in that scene] with only faces.

Filmmaker: What was your working relationship like with Ursula Meier? Was it an equal dialogue? More intellectual or intuitive?

Godard: I do share with Ursula many things, including the ones we never talk about! We talked a lot about the script, the characters both ways, intellectually and intuitively. I can say that I feel affinities with her. Do we ever know exactly where affinities come from? I’m not sure and it’s fine!