Growing Up in an American Commune 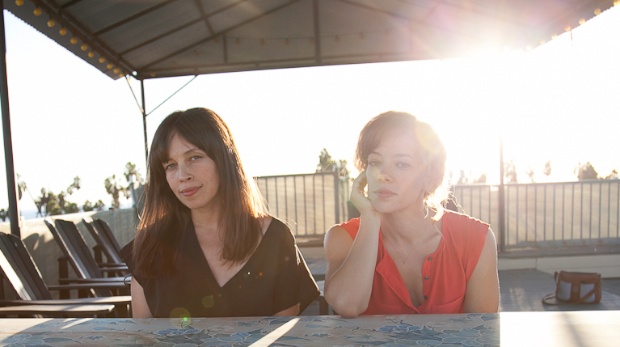 by Rena Mundo Croshere and Nadine Mundo
in Directing, Filmmaking, Financing
on Nov 16, 2012

The following is a guest blog post from the makers of American Commune, which is currently in the midst of a Kickstarter campaign to cover post-production costs. — SM

When my sister and I started making our documentary about growing up on America’s largest commune, we honestly didn’t intend for it to be a personal story. At the time, we were both working as directors at MTV in New York City and none of our friends or colleagues had the slightest clue we were born on a commune called The Farm. We had left as kids in the 1980s when the commune disbanded and immediately did everything we could to blend in to mainstream America, eventually obscuring our past. We merely wanted to survive being new kids at school, and our former life on the commune wasn’t something that we felt most people would understand. We ended up assimilating so well that in our twenties we began working in the heart of commercialism for the largest media empire in the world.

The funny thing about everyone’s past is that on some level it’s inescapable. After a few years, we became disenchanted with working in sensational reality TV. We hungered to tell more meaningful stories and started talking amongst ourselves about where we came from. We had vivid childhood memories of life on The Farm, but had no concrete understanding of why our parents founded a commune in the backwoods of Tennessee, how it worked and why it fell apart. At its peak The Farm had 1,500 permanent members and 10,000 visitors a year. Given the range of people and experiences we felt that the most honest approach would be to make a film from our perspective. But coming to that decision was not easy. As kids, we were taught that you shouldn’t stick out from the group. In fact the commune had a saying, ‘Don’t be into the juice!’ which meant you weren’t supposed to bring attention on to yourself; the group was more important than the individual. And here we had decided to make a movie about ourselves! Scary.

Every year The Farm has a reunion (it’s no longer a commune, but a very progressive community of about 200 people) and we finally decided we would return one summer. We asked our mom, dad and brother to come as well. Our parents were the unlikely coupling of a Jewish girl from Beverly Hills and a Puerto Rican from The Bronx. They were some of the commune’s most dedicated members, but had divorced when the commune fell apart. When we’d asked them to return with us, they hadn’t spoken for nearly 20 years. The camera somehow gave us the courage to ask the difficult questions about our family history for the first time. In the process our parents revealed things they’d never shared. As storytellers we knew right away that it was great material, but as individuals we had to overcome the instinct to censor ourselves.

We also faced the challenge of creating a more nuanced story about hippies than is typically presented by mainstream media. We didn’t want to just talk about a bunch of failed idealists, running around naked in the woods. To the contrary, The Farm members were almost puritanical about living a spiritually pure life and adhered to strict rules. They forked over all their personal possessions and shared everything. They didn’t eat meat, wear jewelry or makeup and lived in huge communal households. Violence wasn’t allowed; even anger was frowned upon. They grew their own food and succeeded in building a self-sufficient society. Their socialist experiment laid the foundation to some of today’s most progressive movements, including organic farming, midwifery, solar energy and communal living. Countless reporters – everyone from Walter Cronkite to Dan Rather – have covered The Farm in news, but we are the first insiders to tell our story.

After we finished shooting, we had to come to terms with the fact that we had no budget to actually edit it. We went back to our MTV jobs to save money and like every other indie filmmaker we know, racked up credit card bills, borrowed from friends and family and did everything we could to finish our film. We also taught ourselves how to edit on Final Cut Pro, write artist grants, research archival footage and everything in between. It would take us several years juggling commercial television jobs and saving enough to work on the film between gigs. We ended up being awarded filmmaking grants from The New York State Council of the Arts, The Jerome Foundation and Women in Film. Once we had an assembly of our documentary, our friend Amir Bar Lev introduced us to Michael Levine, who edited My Kid Could Paint That, Restrepo and the recent The Central Park Five. Michael liked our project immediately, but it was challenging finding a window of time to work with him. He’s one of those editors that is always booked. By the time he found an opening, Nadine and I had moved to Los Angeles. We ended up working remotely sharing cuts via Dropbox, Skype calls and sending drives across the country. It wasn’t ideal, but we were fortunate that technology allowed us to finish a solid cut of our film.

We’re now aware that making a film is only half the battle, doing all of our final mixing and getting it out to the world poses a whole new set of challenges. We just launched a Kickstarter campaign to raise finishing funds to cover our final post costs. We’ve delved into the world of social media and are keeping our fingers crossed that we will have a successful campaign. As first time filmmakers, sharing our documentary with an audience will fulfill a long time dream.