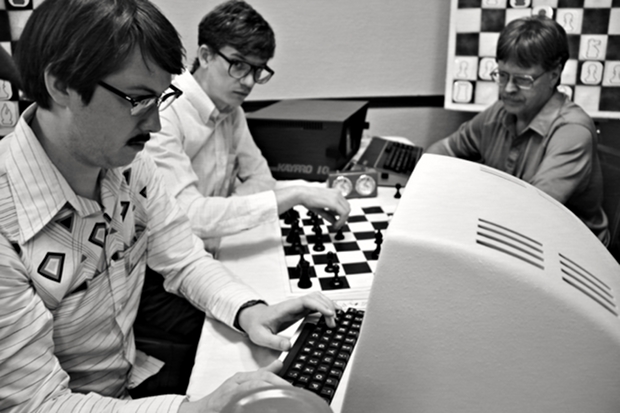 After taking a few years off from filmmaking to form a family and take on adult responsibilities (such as buying a house), Andrew Bujalski premieres his newest film Computer Chess in Park City today. Using an interesting combination of non-professional and professional actors, this crowdsourced movie centers around a tournament of chess players and computer programmers in the 1980s. Though Computer Chess is indeed a period piece, its interest in humans’ relationship with technology remains entirely pertinent as our culture, more than three decades later, finds itself hinged to computers but unable to answer some of the same questions the movie’s characters ask.

Filmmaker: Your last film, Beeswax, was made in 2008. When you started making Computer Chess, how did you find that the game and film landscape had changed?

Bujalski: Well, the game had changed entirely for me – I’d gotten married and had a kid. So I had no clue what was happening outside of my bubble during those years. But of course cinema-as-we-know-it has been undergoing some pretty violent evolution in recent decades and Computer Chess is perhaps in a strange way my attempt to grapple with that. The world has gone digital, and I figured I was going to have to go digital myself sometime – I was just looking for the most bizarre, painful way to do it.

Filmmaker: Was this your first time crowdsourcing funds for a project? What did you think of the process and would you do it again?

Bujalski: Practically, it’s a tremendous option to have. I don’t know that our project would have been possible without access to crowdsourcing, and for that I’m massively grateful. The folks at United States Artists, who we worked with, were hugely helpful. That said, of course, the two drawbacks are a) It doesn’t feel very nice to shake down your friends and family for money – even if you hustle at outreach, it is still likely to be the people closest to you who are digging deepest; and b) I personally felt superstitious about promoting a project we hadn’t made yet! Part of me wishes I’d kept my mouth shut and never said a word to anybody about this project until the day we premiered it! Get Sundance to strike the description from their program notes, just put SURPRISE SCREENING up on the marquee…and never explain to people afterward what they the heck they’d just seen…

Filmmaker: You have mentioned that this film was a way for you to peek into the technology nerd’s life you may have had if things had gone differently. Now that you have made the film, how do you view that life? Could you have cut it?

Bujalski: Oh, I never would have made it as a computer guy – I flatter myself to excuse my undisciplined mind as “artistic.” But no question I come out of this project with increased respect for the ’70s/’80s era programmers we’ve fictionalized in the movie. I came to this world with a heavy dose of skepticism about artificial intelligence in general (i.e. Why are we trying to build something artificially that we don’t really understand organically? And doesn’t this kinda take the fun out of chess?) but I’ve come to feel that their pursuit, with all of its consequences intended and unintended, was as “human” an undertaking as any. It’s at least as noble as making movies, that’s for sure.

Filmmaker: What were the biggest challenges of shooting with PortaPak cameras?

Bujalski: Obsolescence? Technically we didn’t use PortaPaks but an even earlier model, the Sony AVC-3260 from 1969. And you don’t quite realize until you start trying that trying to get 1969 technology to talk to 2013 technology is not exactly plug-and-play. Something that I had fantasized would be very simple was anything but, largely because this is such an absurd thing to try to do that no one out there is making it their business to create a “dummies” workflow for it. I was tremendously lucky to have some real eggheads on the team here who could sort it all out – but every day was an adventure. Obviously no one on the crew had ever shot with the AVC-3260 before, so we never knew what exactly to expect, and the camera threw plenty of curveballs at us, many of which are in the final cut of the movie. I predictably fell in love with all the eccentricities of it and now I feel like every movie ought to be shot on these things. Maybe Sony can get it back on the market.

Filmmaker: Computer Chess portrays the burgeoning discovery of technology and artificial intelligence as exciting and riveting. How do you view people’s relationship with technology today in a society where its far more commonplace?

Bujalski: What I do remember from being a kid around the time the movie is set is that there seemed to be, at least for a child, great philosophical sci-fi questions hanging over our heads: What will it mean to give all the quotidian details of our lives over to machines? Will we lose our souls in the bargain? Will the machines gain them? In 2013, these questions seem awfully quaint – but I don’t know that we ever answered them.