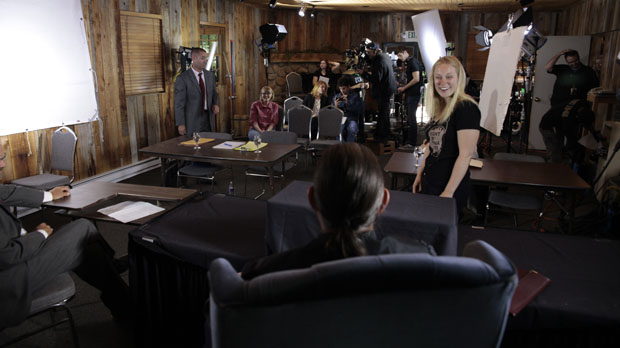 by Pamela Romanowsky
in Directing, Filmmaking
on Jun 19, 2013

Writer/director Pamela Romanowsky is currently at the Sundance Directors Lab this month with her adaptation of Stephen Elliott’s memoir The Adderall Diaries. The following is what she wrote about her experiences at the Lab.

It’s just after lunch, and we’re driving up the mountain road to the house we’ve been rehearsing in. My actors Luke Kirby and Megan Boone are in the back seat. Luke cracks a joke and we all laugh. I turn around to announce that I’m stealing that line for the next scene, and through the frame of the back window, a man in a denim jacket and a red bandana roars into view on a motorcycle. The sun catches chrome on his bike, and no one has ever looked quite so cinematic. He rides like he owns the place. Which is appropriate, because he does. It’s Robert Redford, and he’s on the way to our rehearsal. My face cracks into a huge goofy smile, and it occurs to me that this moment is one I’m going to replay throughout my life. It’s a strange thing to feel nostalgic about a moment as it’s happening. I wonder for the hundredth time how I got so lucky.

The day before, I’d been sitting with the other fellows and our advisors. I haven’t known this group long — the fellows since January and our advisors for two weeks — but conversations run deep and honest here, and we share a kind of intimacy and fierce loyalty usually reserved for old friends. We’re talking about the scenes we’re about to shoot, and Bob says he’d like to know what we’re most afraid of. Where to start?

Michelle Satter (Director of the Feature Film Program) advised us to bring our hardest scenes, and this one scares the crap out of me. It’s my favorite, but I feel in about a mile over my head. It begins as a sex scene and ends up somewhere deep in the mire of self-destruction. The characters are both deeply in need of comfort, but they end up betraying each other and themselves. There’s a lot to modulate in this scene, emotionally and technically, and I worry that the scene might teeter near over-the-top. Gyula Gazdag, the Artistic Director of the Lab, smiles and says, “But how do you know where the top is unless you go over it?” A room full of brilliant people nod in agreement, and their optimism is impossible to resist.

We rehearse. I’m asking the actors to terrify themselves, to access the most achingly vulnerable and out of control places they can find. I’m asking as a director, yes, but also as a person, because I sure as hell don’t want to be alone in there. Luke and Megan plunge in head first, and when I call cut, we’re all a little breathless. It’s incredible. I try to express to them what this means to me, but I’m not sure I can. I am continually moved that people are willing to share so much here, for the sake of community. To make clear just how alone we are not, how much of our isolation is an illusion.

Afterwards, Bob takes me aside. “You’ve got this,” he tells me. “You know what you want and you have everything you need. Just go for it. Don’t be afraid.” I’m still scared, but it’s a lot more malleable than I’ve given it credit for. Doubt evaporates into excitement.

That’s something we’ve talked about a lot here, what to do with fear. The advice comes in so many articulate and generous forms. The core urging is to find what you’re afraid of and lean into it. Look it in the eye. Engage with it fully. The fight we’re all fighting, the team we’re all on here, it’s about the alchemy of risk and self doubt. Turning fear into beauty and revelation and belonging. 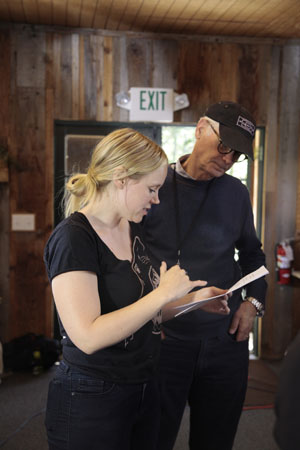 Bob, Caleb Deschanel, Oliver Stapleton, Pete Sollett, Alfre Woodard and the rest of the advisors will visit several times over the next two days. They’ll encourage and challenge me, as I work with my d.p. and my crew and my editor to make a living, breathing thing out of a screenplay. I’ll love the scene. It’ll be some of the best work I’ve done and I’ll be proud.

I’ll have a particularly lovely dinner with Walter Salles, where I’ll get to tell him truthfully that The Motorcycle Diaries altered the course of my life. He’ll tell me to trust myself, and I’ll believe him.

We’ll watch a film in the theater, and our hero will clean a cut on his forehead with alcohol. The whole audience will wince in unison, and I’ll be delighted by that, how palpable the response is. I’ll wince, too. It’s not my forehead, but it hurts all the same. The image is an illusion, but the emotion is real.

But I don’t know that yet. Right now, I’m just looking out the back window of the car, at Robert Redford on his motorcycle. I want to take a picture, but I’d rather just see. I’m here working on a film about memory, and I can’t help but try to grasp at some of my favorite moments, in the hope that they’ll stay with me.

I’m thinking about Ed Harris, and how he taught me so clearly what committing means in the span of three seconds. The guy is made of electricity and charisma, and it’s incredible to be around someone so thoroughly alive.

I’m thinking about Joan Tewkesbury’s writing workshop, and how it felt like that circle of 10 people was somehow sharing a bloodstream and a nervous system.

I’m thinking about Joan Darling, who insists on the personal, and who is so disarming that nobody objects to the discovery that they’ve burst into tears.

I’m thinking about Gyula, and his question to me: How do you know where the top is if you don’t go over it?

It’s impossible to explain how special this place is, or what it means to me to be here, included in this sprawling genius family. I’m overwhelmed with gratitude for what has been built here, out of risk and love and passion.

I write on the top of a blank notepad: “Welcome fear. Lean into it.” And I hope the rest will come.