The POV Conversation: Lixin Fan and Stephen Maing on Telling a Story 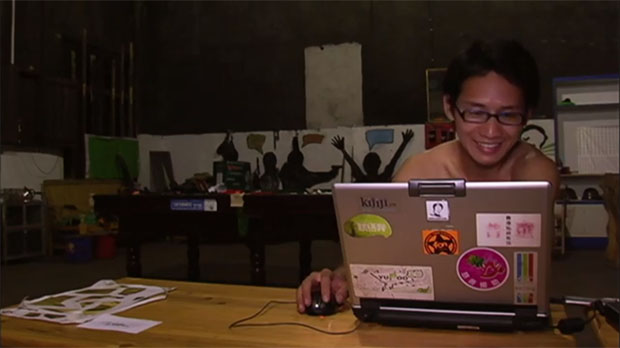 by Filmmaker Staff
in Directors, Interviews
on Jul 26, 2013

Last year, to celebrate POV’s 25th anniversary, Filmmaker organized a series of conversations between documentary directors whose work had been featured on the PBS non-fiction showcase. This year, we continue this series with a fascinating discussion between Stephen Maing — whose debut feature on Chinese citizen bloggers, High Tech, Low Life, is currently streaming for free on the POV website — with Lixin Fan, the Chinese filmmaker whose Last Train Home, an intimate portrait of a fractured family of migrant workers in China, won him great acclaim in 2009. In the conclusion of this five-part discussion, the two discuss how to construct a story through intimacy.

High Tech, Low Life can be streamed for free on the POV website till August 21.

Fan: I think it’s really important that these citizen reporters [in High Tech, Low Life] are being known by the world. And you must know, with the launch of Weibo, the Chinese twitter, grassroots reporters are really making some changes. Did you decide to film them in the beginning? You shared that anxiety of wanting to know where the story is going. Did you have a structure in the beginning, or did it kind of unfold and manifest itself for this particular film?

Maing: Yeah. I think, much like you, that the struggle was knowing that I was capturing what was really essential about their story, and realizing that the more that I filmed there was more that I didn’t understand yet and didn’t know yet. It’s a terrifying hole that you start digging for yourself, because you’re going deeper and deeper and you’re getting to know them so much better and understanding the suggestions of other things in their lives, other forces, other really important issues that have to somehow be understood. In my case, the film, or the very rudimentary story that I understood to be happening, was incorrect. The film wound up being, in relation to that story, so vastly different. I had this unexpected interest in this young guy’s story, who had been blogging. And I would tell some friends, and friends are always supportive. But I could always also tell they were thinking, “Okay, so you’re starting to film a Chinese blogger? Huh. Okay.” It was something that was always so difficult to convey and that was also good evidence that I needed to continue filming. And after years this story kind of balloons and unfolds in an unpredictable manner. I had never known of Zhou Shuguang and his whole situation. I just started meeting all these bloggers along the way. And it was almost an unbelievable experience in my life, one that I was so ill equipped for; to meet so many different people, all with their own individual and fascinating story. With a crew of 20 filmmakers, 20 great films could be made from all these people we were coming into contact with. So, fortunately we were able to find a balance with two interesting bloggers. But, if I had my druthers, it would have had 10 or 20 bloggers’ stories in it. But we have such a limited time to communicate a handful of meaningful ideas. I really wanted to tell a personal story, not a political one, and communicate something, whatever that political narrative was, through character based filmmaking. And that doesn’t happen overnight.

Fan: Yeah, I guess it’s always a labor of love. It’s really a risky trade, trying to build a character narrative with bits of materials you gather over time. It’s tough.

Maing: There’s something about your filmmaking style that has always amazed me. I think you establish these beautiful narrative storytelling parameters, you establish this way of looking at what you have predetermined as the general subject matter. There’s something so intimate with this very layered and nuanced way of filmmaking that you achieve, and it amazes me that you create an incredibly imagistic and, in some ways, elegant framework to look at. For somebody who always considers what is in front or behind the camera, one gets the sense that this is a huge production but yet it feels so incredibly intimate, and I think that this is the great magic about your film. It’s really one of a kind, actually. It does feel like a quiet meditation, I can tell you do an incredible amount of preparation and I can feel you and your team are incredibly highly skilled but then you give yourself to the story, you give yourself to the event in front of you. And just the choice of angles, you don’t always need to get the frontal shot of the face, to preserve the intimacy. I really like that scene when the parents are trying to get the tickets, and we don’t actually see the father’s face from the front all the time, and it was really a respectful moment. You are trying to let them know that you’re there not to exploit their emotions all the time, but to be there to bear witness from a distance. But the thing about the camera, as we all know, is that it captures so much so intimately.

Fan: That’s very nice of you to say. It’s a process for me to meditate and try to figure out what is the best way to achieve what I want. I hurried a lot, in the beginning, with how I approached it. It made me ashamed that I just didn’t give it the time and patience that this story deserved. I like what you say, that I give in to the story, and in fact that is how I felt when we went almost a year into the filming. In the beginning I was always worried I wasn’t getting enough coverage of the right interview, at the right time, at the right moment, or I missed some particular emotions at a certain time. I had a lot of pressure in the first six or seven months of filming. There was a period of time I felt really lost and I doubted myself, I doubted the approach, I even doubted the topic itself a lot. I had a lot of doubt. I thought, “This topic has been covered by the news again and again. Making a story that looks like news reportage — what would really be the point?” But I thought again, ‘This is really an important story that needs to be told. It concerns the lives of nearly 200 million people, so how can it not be important?” But then I realized I needed to find the right way to tell the story. And from that moment on I decided that I would really take my time, or I would really give in to the story. I would really give the time and patience that this film needs. Also, when we spent that much time with our subjects it didn’t take very long for them to open up and accept us as a part of their life. It was really a huge — I wouldn’t say sacrifice… What’s the right word? I guess, a favor, a huge favor for all of us. And so, I think I have to show, if not more, the exact same amount of respect. And I do have to have that humbleness in my heart, and that respect towards my subjects, simply because they are so nice and hard working and clearly can open up to the filming. I think that was incredible. I needed that level of intimacy with my subject. That is why I shoot from the side instead of in front. I guess it made them much more comfortable, not confronting them, and not being so invasive.

Maing: I think that’s really insightful, those worrisome first six months that you went through. What I’ve grown to understand about documentary filmmaking is that we’re not just participating in our subjects’ lives and their challenges and vulnerabilities and fears, they are also participating in ours and they’re also bearing witness to our process. I think that if we’re doing it in a way that opens up our process to understanding people, and attempting to try and really dig deep, that any subject in that situation of being filmed and observed and documented would see the inverse happening as well. That a filmmaker is really struggling with filmmaking challenges and fears, that you [as the filmmaker] are not doing it in the right way, that you’re not doing the story justice and you’re not conveying what is so essential about what you’ve been privileged to see. I could really relate to that throughout the whole entire process of making my first documentary. It was a constant battle for me to try and really just believe it was something that was doable. And, in a way, I think that burden of responsibility that you inherit the minute that you spend even couple days shooting someone, that their understanding of what you’re doing or that you may not even understand yourself, is something that leads to a kind of expectation. They’re relying on you to tell their story in a way that speaks to what they’re going through. It was something I so desperately wanted to try and get right, and the funny thing is that there are an infinite number of ways to tell any story and your way is such a personal one and it’s formed by your own life experiences. There’s that really interesting moment when the people that you’re filming start understanding who you are, why you are doing the things the way you are doing them. That kind of behind the scenes relationship between the subject and filmmaker, I think, is fascinating.