by Nick Dawson
in Directing, Directors, Filmmaking, Interviews
on Jun 18, 2012 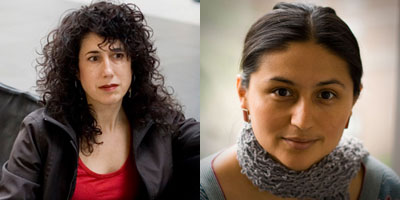 In celebration of the 25th season of PBS’ groundbreaking documentary series POV, Filmmaker is this week running a four-part conversation series between two non-fiction directors with close ties to the show. A few weeks ago, acclaimed documentarian Jennifer Fox — whose 20-year project, My Reincarnation, kicks off the 2012 POV season this Thursday — and The Last Conquistador director Cristina Ibarra, a relative newcomer to the non-fiction scene, sat down to talk about a variety of issues that arise from their work. Despite radically different backgrounds and, at the time of the conversation, being literally continents apart — NYC resident Fox was in Amsterdam, talking to Ibarra over Skype — the two found much common ground and dug in deep in their discussion of the documentary craft.

In this first of four parts, the two directors talk about how and why they gravitated towards the realm of non-fiction filmmaking.

Cristina Ibarra: I grew up in El Paso, Texas – on the border with Mexico – with immigrant parents from Mexico. It’s funny because always a lot of the immigrant children are supposed to be the doctors or the lawyers, and my sister was really interested in medicine and she was going to be a doctor. So I was like, “Oh OK, I’ll be the lawyer.” I was the first one in my family to go to college, so I went there very naively thinking, “Oh, just go so you can get that degree and make some money. And do something good for your family.”

You can study anything you want when you’re an undergraduate and still apply to law school, which gave me a lot of freedom to study different electives. I found myself taking more and more media classes; and parallel to that I was taking a lot of Chicano history classes. And there was this anger that was building up because I was learning a lot of history that I didn’t know growing up, that I thought was unfair. I couldn’t understand why, in a city I grew up in, the majority of Mexican-Americans were still not learning about the Chicano movement.

I found that joining those two subjects—filmmaking and the Chicano history I was learning—was the easiest way to talk to my family. So, I just thought instead of creating this cross-cultural dialogue with our Spanglish, maybe using the visual language I can create my own arguments and talk to them. And then I started to see the work touching people outside of [my immediate circle]. I remember showing my first film at the African-American Women in Cinema Conference here in New York. And somebody came up to me, a forty-something African-American woman, and she was talking about this twelve-year-old protagonist in my film and she was saying, “That was me growing up. That’s exactly how I was.” And it really touched me, and I realized I wanted to keep doing that. I wanted to talk to my family and then just figure out how I connected with other folks. That’s kind of how it started for me.

Jennifer Fox: That’s really funny, Cristina, because I come from a Jewish family and a lot of Jewish culture is based on social good and there’s this concept that you should give back. So I had a mother who was an artist and a musician and a father who was a businessman, but they both were always saying, “Whatever you do, you have to give back.” And really talking about social issues, and when I was a young teenager I thought, “Well, I’ll be a lawyer,” because it just seemed like the easiest way—at a distance at least before you knew what being a lawyer really is. I then did an internship with a legal aid society in a mental hospital and another internship with Children’s Aid. I quickly realized that lawyers actually don’t have much agency to do stuff in the world and they’re kind of stuck in these bureaucratic battles.

So I dropped the idea of being a lawyer but I still had this idea of social justice. So then I thought I’d be a journalist and reporter and travel around the world and same idea. And then very quickly ran out on that idea and found film because I just took a class in college—similarly to you, I feel that there are a lot of similarities—and thought, “Oh, this is it.” And then I actually dropped out of college—I never finished college—to make my first documentary.

But I was really trying to combine this love of art and story with changing the world. And film sort of just did it all in one way. So, I feel that there’s a real similarity there.

Fox: You know, funnily, I went through one year before I dropped out and what I did was study fiction. So there’s a way that I love fiction but my being needs to do something of social importance. And there’s kind of a schizophrenia that I didn’t realize, so that the reason I dropped out of film school was that I got caught by this story in Lebanon, which was my first film, Beirut: The Last Home Movie. It was, I think, this desire to deal with reality and struggle with social issues. I couldn’t figure out when I was younger how to combine that with fiction.

And I do think, and I’m curious about what you think, that as a woman, the kind of physicality of documentary is so seductive and powerful; I love the fact that I can make a film myself. With fiction [filmmaking], the whole idea of a hundred people on the set? Where’s the fun there? I feel like I get to go out into the world with a camera and meet reality, physically, and talk to people. And I feel like that immediacy of the documentary form is very female; I feel like women love to connect. I’m simplifying, but I just feel like the form is actually very female —sorry, men out there! But I’m curious what you think.

Ibarra: Well, I think that this intimacy that you have to establish to be able to get to an emotional truth is so important, it’s essential. And it’s true that you can do it with a small intimate crew more efficiently than with this large film set; and I think for me, selfishly, it’s more of a way of reflecting on perpetual questions I’ve had growing up. So I guess physically it’s like going back home for me and growing up and having this kind of third space in the border with this reflective mode. So it’s both about access and the subject of the film. But I do also enjoy thinking about fiction, and I do have a screenplay that I hope to produce at some point. So I do like jumping around and crossing different genres.

Fox: And by the way, I’m in Amsterdam now on a fellowship for directing a new fiction film.

Fox: But I think [with] the [fiction] film, the reason why I can even move to it is because it’s a true story. And again it’s really struggling with issues that I struggle with in my life.

Ibarra: Yeah, so it’s both something selfish and about social issues—like you have to get something out of it too. [laughs]

Fox: Yeah, well usually I have to say that everything I do is both outward but also me struggling—I think I’d say I’m always working within things of my own life in my films even though they’re about other people and big issues sometimes. I’m always investigating. The new film, My Reincarnation, is following my own Tibetan Buddhist teacher and his son for 20 years—and it is me grappling with issues of faith and spirituality and how to translate that to other people.

Ibarra: Here’s a question that you’re making me think about. Sometimes I find that the most challenging part of documentary filmmaking is when I have to put my perspective aside to be really authentic to the subject, the person that is speaking to me about their experience. Then I can come back to my perspective. But I feel like it’s a struggle sometimes, like I want to get at a truth and in doing so, I need to really just put my own assumptions aside or my own truths and speak very directly and authentically with that person.

Fox: I think that’s really beautiful. I love the way that making films makes you – forces you, actually – to be present and to put your ego and concepts on the side, and just try to stand naked in front of a person. And constantly try to see what’s true, what’s really true here—not what I project, not what I thought yesterday, not what does my mother think, but really to be present and authentic. I often say that my biggest spiritual practice is my filmmaking. I can’t pretend I know something because in this moment I have to come at it in a totally fresh way and be new to every moment. Even now, by the way, working in fiction. Every time I think I know something, I have to let it go because it doesn’t work.

Ibarra: Yeah, I love that. I’m fascinated by that process because it’s so opposite of how I started making films. At the beginning, it was just, “This is how I think, this is my argument.” You know, it was this attempt at validating “Here I am,” but it’s evolved and now it’s a different objective. It’s about this connection and understanding how to talk to each other and cross these different divides. It’s been a journey to get there though.

Fox: Yeah, and I guess that’s what developing our craft is about – it’s actually a journey at transparency.

Next: POV @ 25: JENNIFER FOX AND CRISTINA IBARRA ON DOC FILMMAKING AS VOCATION