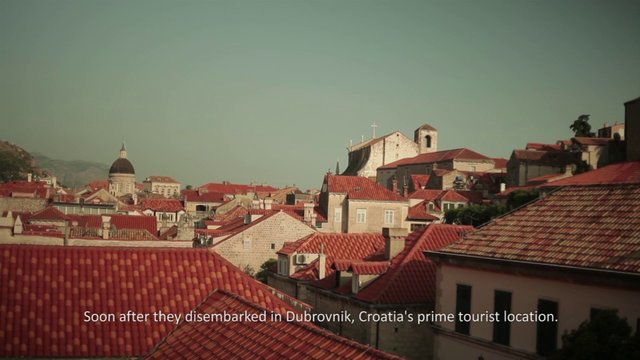 by Sarah Salovaara
in Directing, Filmmaking
on Mar 11, 2014

In recent years, the island of Cyprus has become something of an unforgiving melting pot. The often life-threatening emigration of Iranians and Syrians to the once predominately Greco-Turkish enclave presents a tense social fabric that is poetically probed in Iva Radivojevic’s debut documentary Evaporating Borders. Radivojevic adopts an aesthetically meandering and unique approach to the film, which is almost paradoxically structured into character-based chapters. Filmmaker spoke with the Yugoslavian-born Radivojevic about her personal connection to Cyprus, the process of voicing the film’s narrator and other traditionally fiction form elements at work in the film. Evaporating Borders premieres today in the Visions section at SXSW.

Filmmaker: You’re originally from Serbia, which has its own history of racial tensions and migrant strife. Did the similarities between your country and Cyprus lead you to relating its condition, or what, in particular, drew you to the island?

Iva Radivojevic: That’s a good observation. I never really connect the two when I think about the film, but my guess is that naturally it had to have played a part. I’m originally from Yugoslavia. My mum, sister and I moved to Cyprus when the war in Yugoslavia broke out. I was twelve and I’ve been living as an immigrant since (that’s not a complaint). This shared experience of displacement is what connects me to the people and the issues in the film, even though our individual experiences and set of circumstances were entirely different.

Filmmaker: Your short Between Colors of I was shot in Morocco and features a fictional narrator, despite the categorization of the film as a documentary. For Evaporating Borders, how did you go about scripting the protagonist’s narrative, and choosing to voice it yourself? Has anyone accused this technique of being dishonest?

Radivojevic: Between Colors of I is based on a documented experience…mine. Then the narrator is invented and given certain traits — traits that draw from whatever could be interpreted through his voice and words. This, of course, could be a multitude of things (he could be French, he could be a tourist, an immigrant, etc.) — and that’s where the audiences’ participation and imagination comes in, to build a possible picture of who the narrator might be.

In Evaporating Borders, it’s a little different. It’s again based on my experience but this time there is no disguise, it’s naked. Extremely subjective of course, and also very naked. I narrate. So I am there for the viewers to scrutinize, question, disagree with or for them to find themselves in the words. The narration is a combination of notes and thoughts that I wrote and gathered along the way, in the process of making the film. They are based on experiences, encounters and streams of consciousness. I weaved them together and wrote an imaginary letter to a friend which became the narration.

Filmmaker: Why did you decide to structure the film in chapters? Was this done in the editing room, or did you have it in your mind all along? The post-script is particularly strong, as it best melds your imagery and words.

Radivojevic: In the film, I’m illustrating a compartmentalized society and so naturally the structure slowly gravitated toward that. Fragmented. On top of that, the story itself is complex, it has many layers and many nuances that can’t possibly all be expressed. One way I could process all that information and nuance was to structure these thoughts into clusters.

When I edit, I watch films for inspiration. There were three films that stood out at the time and all three were chaptered: Michael Glawogger’s Workingman’s Death, Srdjan Keca’s Mirage (a brilliant Serbian filmmaker) and Jim Jarmusch’s Mystery Train. I knew before starting I wanted that chapters because my mind worked better with them. Then I read books written in first person narration to help inspire the voiceover.

Filmmaker: Did you face any particular challenges while investigating a topic that is sensitive to many Cypriots? It seems that the majority of your participants were impassioned and willing to speak with you, but were you every worried about stepping on toes?

Radivojevic: The challenge is always that of representation. Who is talked about, how and by whom? This is a very important question.  I wanted to be as transparent as possible about who the narrator is and where they are coming from. Knowing that, the viewer can make their own assessment about what they are seeing. It was important to me not to blame or victimize and instead turn that questioning inward and self reflect — to consider my own participation in what I’m witnessing and perhaps invoke the same in the viewer. To question themselves.

Filmmaker: Many members of the Brooklyn Filmmakers Collective are credited on the film, as well as Laura Poitras. Can you speak about about that collaborative process and the latter’s involvement?

Radivojevic: The film was written, directed, shot and edited by me. And NONE of it would have been possible without the help of friends, collaborators, mentors, family and strangers. From feedback sessions in BFC, to advice, screening hosts, Kickstarter backers, composers, to the colorist and the sound guys at Harbor Sound, everyone donated their time in one way or another to make the film possible. I’m eternally grateful for that. It’s a beautiful feeling, to be in collaboration.

Laura came to Hunter a few years ago, to our MFA program. She critiqued and took a liking to my work and has been supporting it since. When I told her about Evaporating Borders, she suggested she come on as an Executive Producer. Everyone needs a mentor.