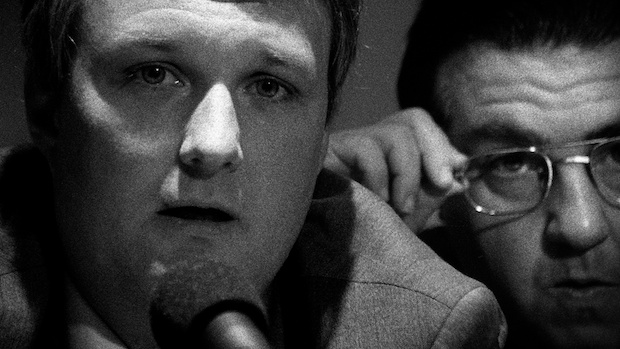 If you want to make a movie, you need a good script. Or, at least that’s what they tell you. A script gets the talent, which gets the financing (the two are really synonymous). The other thing you’ll need, of course, is luck. First-time filmmaker James N. Kienitz Wilkins can thank Google for both (not the money part though). While cruising the Internet in 2007, Wilkins came across a transcript of a public hearing on a town hall website. It described in detail a well-attended public hearing in Allegany, New York, population 8,000.

At issue was a proposal to replace the town’s current Walmart with a super Walmart — an admittedly mundane but significant proposition. According to Wilkins, he found other more obviously dramatic hearing transcripts in his search, but was taken with Allegany’s dry testimony and lack of drama. The hearing’s two-hour plus transcript provided a glimpse into often meandering and confusing process of modern civic democracy played out in real time. Every utterance, half-finished thought and aside was there in the text. The hearing also revealed the methodology of corporate America’s Manifest Destiny as embodied in the Walmart rep’s Powerpoint presentation.

Wilkins was fascinated by the idea of making a movie using the raw transcript in its entirety — exploring the drama between the lines. Of course, as a screenplay, it lacked certain key details: it gave no indication of the physical surroundings of the town hall or of the speakers themselves, beyond what they said. Unfazed, Wilkins decided not to research the real people and accepted the inherent ellipses as creative opportunities in what would become an interpretive filmed re-enactment — a comical and conceptual meta-film about the process of democracy as well as its own creation.

Granted access to an unused office space thanks to LMCC’s Swing Space Program, Wilkins and his team set up camp and shot the film over a leisurely two months in the autumn of 2009. The room became the film’s only set. He cast friends, artists, actors, and non-professionals to bring to life the large ensemble of townspeople and council members — effectively recreating an alternate Allegany. It took a year just to view all of the developed film, during which time Wilkins was forced to sell a beloved Bolex camera on eBay, which was purchased, incidentally, by filmmaker Ben Rivers.

The 110-minute feature Public Hearing is the result. Wilkins describes it as a “didactic comedy” that’s both a “formal experiment and [a] satirical experience.” Composed entirely of close-ups and shot on 16mm in beautiful, grainy black and white, the film pays homage to Frederick Wiseman, the great chronicler of America’s institutions. While the film remains faithful to the words and chronology of the original transcript, Wilkins was forced to make some cuts for the sake of pace and running time. In lieu of the Walmart presentation, Wilkins had a video artist friend make a deliberately crude but poetic fly-over 3-D animation that is the film’s one flight of fancy.

For the most part, however, Wilkins is exacting in his translation. He even incorporates the hearing’s actual mandatory five-minute break, which becomes a kind of musical intermission in the film that allows viewers to check their email, steal a short nap, or grab another coffee. That’s when the film’s central conceit dawns on you: the movie’s audience is in actual fact attending a public hearing. And for most of us, this is a first.

All told, the film was a six-year endeavor, but it’s paid off. It received a world premiere at CPH:DOX in 2012 and a New York premiere last spring at MoMA P.S.1. Wilkins has Google to thank for the film’s global dissemination. To avoid the expense of subtitling the film in multiple languages as it toured the festival circuit in the last year, he simply fed the script through Google Translate, which spit out versions in the appropriate language—albeit with a marked indifference to tone or nuance, which itself seems to continue the film’s dialogue with the ethics of interpretation. It’s to his credit as an artist that Wilkins can spin pragmatism into sly conceptualism.

Public Hearing will screen in the original English version at Union Docs on Saturday, March 8 at 7:30pm. Wilkins will be on hand, along with actor Theodore Bouloukos and composer Eugene Wasserman, for a post-screening conversation with curator Rachael Rakes. Coffee and doughnuts will be served.