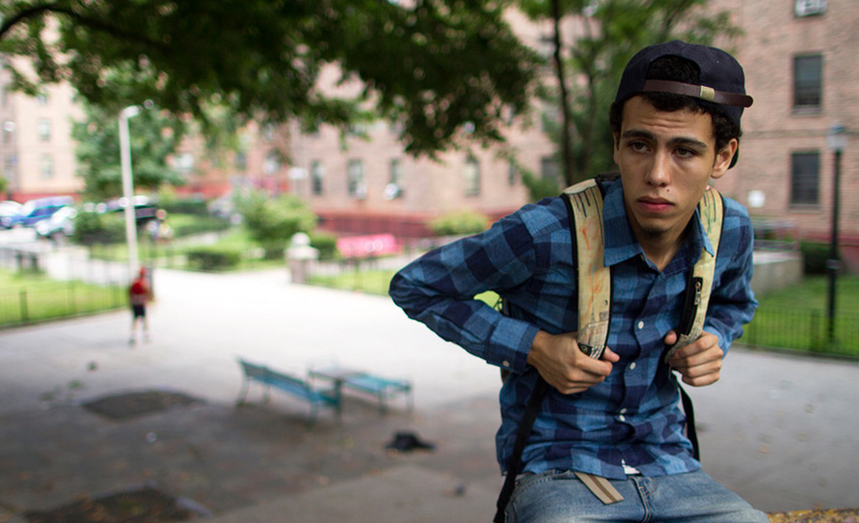 by Sarah Salovaara
in Directing, Filmmaking
on Apr 17, 2014

A generational meditation on masculinity, Keith Miller’s sophomore film Five Star explores the relationship between Primo — a Blood since puberty — and his would-be protégé, John. Set against sun-scorched Brooklyn projects, the film folds a casual shooting style into heavier thematic territory. Maintaining an alternately protective and imposing arm, Primo struggles to reconcile his history with his paternal instincts as John is pulled deeper into the gang’s underbelly. Filmmaker spoke to Miller about the film’s non-fictional foundations and his collaboration with the leading “non-actors.” Five Star world premieres today in the World Narrative Competition at the Tribeca Film Festival.

Filmmaker: This is a world all too infrequently depicted in independent film. What attracted you to the gangs, the projects, the drug-dealing — why tell this story?

Keith Miller: The films I am interested in making right now take on personal issues set within a social and political context, so that is the beginning point for my storytelling. In this situation, I met Primo and we began talking. Issues of manhood, fatherhood, rites of passage have been an interest of mine for a while. At the same time, I feel like there is too often a detached alienation when discussing certain issues, as if there is an abstract THEY that is other. Things like the school to prison pipeline, the idea of gangs and the reality of them: these were things that seem to have an abstraction to them, but in reality, they are as complex, nuanced and complicated as any other people’s lives. In this story, I had hoped that some of that humanity would come through in the intimacy of the filmmaking, the performances and the story.

Filmmaker: How did you meet Primo and John? What was it about them that led you to believe you could involve them in this process, and how did they initially respond to you wanting to make a fictionalized adaptation of their lives?

Miller: I met Primo through Shannon Harper, the lead in Welcome to Pine Hill. They had been bouncers at the same club. John was in Jeremy Engle’s short film Mosquito, and he auditioned for us. My process requires a great deal of emotional honesty and courage –which I  think is essential to all great performances — and I made that clear from the beginning. Both were really open to that and excited to do the project.

Filmmaker: Can you speak about the process of directing non-actors who are playing heightened, alternate versions of themselves? Is there more room for collaboration, to have them draw on actual experiences?

Miller: I like the challenge of working with so-called non-actors because there is a reality to the performances that one sees with only great actors (not the very very good ones). I make this distinction between so-called non-actors, because it should be clear that when there is a whole crew of twenty or so people, two cameras, multiple takes, a lot of direction, and all of that, it is hard to think it is not acting.

That said, I try to work with them the same way I do with trained actors. The difference is mostly on the level of terminology. I avoid jargon and when going for different emotional ranges, I try to work with them to create a safe space in which they can go out on a limb, try things that in the real world (whatever that is!), they would not necessarily allow themselves.

Filmmaker: As you did with Welcome to Pine Hill, there is an emphasis on taking brief encounters and heightened realities and using them to interrogate reality. What attracts you to this style of filmmaking, and do you have any desire to make a purely fictional film?

Miller: I want to make things that bump up against the everyday in a way that challenges our way of seeing and thinking about it. I think a purely fictional film can do that, but there is something about the inherent confusion in this mode of storytelling that makes it a bit less comfortable and therefore a bit more challenging. I think this is why people ask, “So is this part real? Did he really do this or that?” The sort of anxiety that comes from not being sure what is real, I hope, creates a more direct and experiential engagement with the story, and then by extensions with the reality outside the frame, which is, for me, where the most interesting stuff happens.

Filmmaker: The film takes a loose approach to dialogue and cinematography, but the opening monologue, which encapsulates Primo’s values as a character, is relatively formalized. Why did you choose to open the film in this manner?

Miller: I wanted to start with that shot because the monologue blew me away. We had worked through it that day, but the camera frame and palette (thanks Ed David!) are so amazing, and the performance even more so. It also lays out the complexity of Primo’s position, giving a lot of crucial information in a really compelling way. But I’m not so sure that it is more formal than the rest of the movie, although I see why it feels that way. I’m glad the film feels loose. That’s the hope. In practice, I think that first shot is as loose or formal as the rest of the movie. There is an apparent rigidity to it, since the camera had to be attached to the car (that’s a lot of money if it falls off…), but a lot of the other scenes are actually more rigid in their execution than that one.