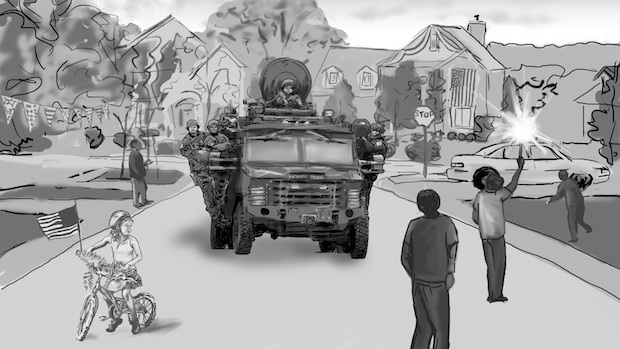 25 New Face filmmaker Scott Blake is currently raising funds on Kickstarter for an ambitious “urban insurgency” short film, Victory. Below, he discusses inspiration ranging from Michael Mann to Joseph Conrad, why he cast Kentucker Audley and why he’s making another short. Please visit his Kickstarter page to learn more.

Filmmaker: First, let’s start with Surveyor and the 25 New Faces. You were one of our real discoveries, as your film hadn’t played many festivals and you hadn’t received much notice for it. What has happened after being selected for the 25, and how did that path lead to this short? And how did you connect with Kentucker Audley?

Blake: After being selected for the 25 I wrote two feature scripts and started to adapt a book as a writing exercise. I’m not sure what one does when a feature screenplay is completed, so instead of wandering in the wilderness for a while trying to get a pricy feature off the ground, I thought I’d try to make another short film, and Victory was always tormenting me.

I saw Kentucker Audley in Sun Don’t Shine. It’s a fantastic film with vision in every frame, and one of my favorite films of the last couple of years. Kentucker’s performance (not to mention Kate Lyn Sheil’s and Amy Seimetz’s direction) shows that filmmakers should give him more chances, even if it’s a short film! So I thought he might be interested in trying something different. I suppose his character in Victory is a mix of Brahim Hadjadi in The Battle of Algiers and Robert De Niro in Heat, plus Kentucker.

Filmmaker: You say the script was completed several years ago — when did you write it, and what was going on in your life, or in the world, that inspired it?

Blake: I wrote it a few months before I shot Surveyor, so around April and May of 2011. At the time I was reading Marc Reisner’s non-fiction book Game Wars. It’s about undercover game wardens battling poachers in a netherworld of American ecocide. Reisner details a pivotal event in which he goes undercover with a game warden on a night-time canoe ride through a drowned forest with Cajun alligator hidesmen. The Cajuns start shooting at overflying ducks, hitting one that falls into their canoe. The duck is able to flop out of the canoe and swim away, but they chase it down by slamming its wings and feet with an oar. A Cajun grabs the duck’s head and twists it off, and the rest of the duck flaps convulsively into the bottom of the boat with its neck bone sticking out. In the Cajun’s hand, the duck’s bill continues to open and close like an automated toy. “It was, for a moment, a creature twice dying,” describes Reisner.

This scene affected me. You’re suddenly filled with a lot of anger and hate, and I started thinking about a film with characters embedded with an even deeper level of anger — creating a violent ideology of resistance pitting them as underdogs against those responsible for that hate. Victory is about people believing they’re standing up for the little guy. What exactly the characters are resisting will be revealed in the film.

Filmmaker: Tell me more about those film references you cited, and others, perhaps, and the way your short is inspired by them?

Blake: If you look at Odd Man Out and Gavras’ State of Siege and The Battle of Algiers you see people becoming situationally-motivated to do something about an overwhelming threat against them. For example, mothers plant bombs in crowded cafes that almost certainly kill children. So, what causes a person to do that? How and where does this violent act happen in its embryonic state? Who’s to blame? Also, trying to apply a modern, conventional sense of morality to the characters in the films above, as well as to those in my film, is a major pitfall. A film lacks spine when it tries to support both sides and include, say, beardos living in the woods talking about their ideology. Sometimes there aren’t two sides to every issue. And like in a Michael Mann film, the characters in Victory are confident and precise – and the film will become more honest that way. I believe honesty is the most important aspect of a story. Joseph Conrad gets at this in his preface – which is a must read for any filmmaker – to The Children of the Sea.

Filmmaker: Your Kickstarter short is striking and unusual — instead of the sincere first-person pitch, it’s an elegant mood piece. Tell us about its concept and production?

Blake: The Kickstarter short grew out of the location. Some friends of mine live in an apartment with a view of downtown Seattle, which is an important location in the story. If Surveyor was about the foundation of cities (among other things), then Victory is about the end of them. We shot it in one night, and it’s basically my friends getting together with airsoft guns. I think doing a first-person pitch would be boring, or I’d be boring in it, and thus ineffective at selling the film. Maybe I’m being ineffectual in this interview! But I felt the mood piece was more interesting.

Filmmaker: Finally, why do this story as a short film instead of a feature? What inspires you about the short form, and do you expect to do anything different with this short on the business and distribution end than you did with Surveyor?

Blake: The best short films are the ones that couldn’t have been told in any other format, like a great short story in literature. Filmmakers Mohammad Gorjestani and Anahita Ghazvinizadeh — the most promising filmmakers out there — have each created perfect short films. In my view, the short format is part of their film’s secret sauce. Anahita and Mo maintain the honestly of the format, rather than creating a “concept” video of something larger. I hope Victory does the same.

I’m not sure what I’ll do with this one, because I’m not certain it will get funded. I have a hard time coming up with inexpensive stories! On the surface it’s a thriller of sorts, so I don’t think people will click away. My last film is a bit of a drag to watch online. You either keep your head down and try to make films, or become Bill Paxton’s character in True Lies.