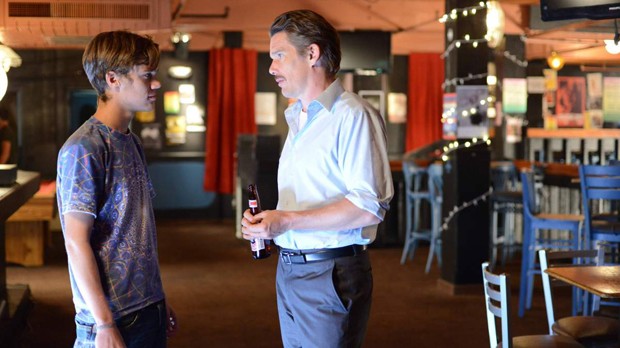 by Michael Murie
in Editors, Post-Production
on Dec 10, 2014

The filming of Boyhood, shot over 12 years, posed some unexpected challenges in post-production. At a recent meeting of the Boston Creative Pro Users Group, First Assistant Editor Mike Saenz explained the difficulties of the editing process, made more complicated by changes in technology that occurred over that 12-year period.

Begun as what Saenz called “an indie side project” by director Richard Linklater, Boyhood was originally edited using Final Cut 3, as they couldn’t afford to rent an Avid system for 12 years. A couple of years into the project, they switched to Avid Xpress, a lower-end system from Avid. They were editing from DV25 tapes of film roll dailies that were digitized at 29.97.

As Saenz pointed out, now any laptop can edit High Def, and if you’re shooting film you get frame accurate, progressive, 23.98 or 24 fps files, not tapes. But by the time those systems became cheap and reliable enough to consider, the Boyhood team already had a large part of the project existing in the older format. “We’d have needed to go back and retransfer tens of hours of film, and we didn’t want to do that. So we kept on, even until last year, doing things this really archaic way with these little DV tapes. We cut on those, and they’re not frame accurate either, so it was crazy.”

By the time the last tapes were made, even the transfer company was losing touch with the process of creating the dailies. When Saenz contacted them to try and trouble shoot a problem, he was told “We haven’t touched it since last year, nobody does it, and nobody can trouble shoot it anymore.”

When it came time to deliver the final edit to Cinelicious, who did the conform and final DI selects scan, they encountered two problems.

“The thing about cutting video 29.97 is that 24 does not go cleanly into 30, because some frames are cut in half and repeated. The bottom line is when you make a cut, there’s a chance that it will be a half-frame ahead or behind of where it should be. Your cuts aren’t necessarily frame accurate. People aren’t used to that any more.”

Their other problem was that their dailies tapes contained multiple film rolls on a single tape. They had planned to use key numbers and frame numbers to identify the edits. “Twelve years ago everybody thought that was the way to do it. [You] just tell somebody, ‘Here’s our lab roll, here’s our key code.’” Cinelicious said to give them an EDL, but, as Saenz explained, “The EDL lists a tape and the tape is 60 minutes long. [We] had more than one lab roll on a tape, so how are you going to know what lab roll to pull physically if I tell you it’s tape 52? And they ask, ‘Don’t you have just one tape per lab roll? Usually that’s how we do it,’ and I’m like ‘No, on lab roll 60 we’ve got 4 or 5.’” 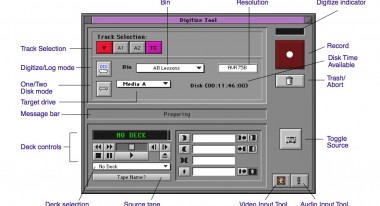 Digitize Tool in Avid Xpress 2.0. from Getting Started Guide

The solution: Saenz had to go into the Avid system and find the hole punch at the beginning of every roll, then make a document that listed, for each tape, what roll it was based on the time into the tape. “Then they scanned it, and it pretty much worked out!” Saenz said. “That’s kind of how it works in filmmaking, and post in general. You’re always thinking, ‘We’ll figure it out.’ But it’s a lot like getting on the 10 meter high diving board and diving off, hoping that by the time you get to the bottom the pool has water in it.”

Saenz noted that with a project of this length it was easy for changes to occur in production that weren’t expected by post. “One year all my camera reports said 3-perf on the top and they’d been shooting 4-perf for 10 years. Is this going to be a problem? It turned out, no, because we weren’t cutting negative and doing an optical answer print the way they used to do. All we had to do is keep track of what’s 3-perf and what’s 4-perf and it was fine. But we had to do tests. I had to check if this was going to match back wrong. ‘Is Avid going to get the key numbers confused? Can I keep track of both in the same project?’ Yeah, I can. But there was a minor panic there.”

If you haven’t yet seen Boyhood, the 9-minute making-of featurette provides an idea of the scope of the production.