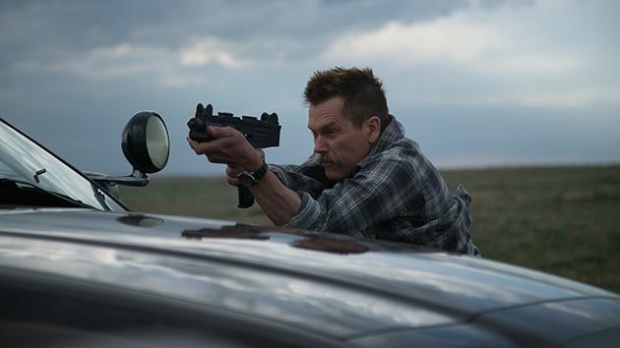 From set, the production executive was on the phone. “There are 10-year-olds saying the word ‘motherfucker!’ she said with concern. Would an “R” rating still ensue? None of us were sure, but we spent plenty of time on conference calls with lawyers trying to figure it out.

So, then, when writer/director Jon Watts says below that ten-year-olds saying “the f-word… is a really big deal,” I know what he’s talking about. I haven’t seen Cop Car yet, so I don’t know whether his tyro f-bombs made the final cut. Regardless, though, I love adult movies about kids that are really adult, which is what this tale of two kids stealing a police cruiser sounds like. Below I talk to Watts — whose previous work include 2014’s Clown, commercials and shorts for the Onion News Network — about four-letter words, Spielberg and the importance of prep.

Filmmaker: Kids and violence — your film presumably combines the two. What are the challenges involved in making a dark tale with underage kids, and how did you deal with them?

Watts: The kids were having a blast the whole time, so the biggest challenge was trying to get an honest and consistent performance. ​The finished film is hopefully very intense, but most of the time the actual shooting was silly in the way that technical shoots can often be – the kids are staring at a tennis ball, a PA is rocking the car, I’m trapped in the backseat with a monitor. The cussing was a much bigger issue. Saying the f-word when you’re ten is a really big deal!

Filmmaker: Your film is described as a “minimalist thriller.” Could you discuss what makes it so, and how you used the resources and tools you had to make a gripping movie?

Watts: ​To me it was about focusing on the logic and mechanics of the situation and letting that drive the style of the film. Two kids steal a sheriff’s cruiser, the sheriff wants it back but is stranded out in the middle of nowhere. How is he going to get it back? ​To him that’s all that matters, so that’s all that matters to the film. There’s no time for anything else. It’s like a Melville film.

Filmmaker: How did you find the child actors, and what specific qualities were you looking for?

Watts: ​We had a great casting director and looked at kids from all over the U.S. ​I was looking for a combination of toughness, thoughtfulness and naturalism. You had to feel like these kids were truly thinking their way through the situations — albeit with a 10-year-old’s logic. We actually didn’t cast James and Hayes for the specific roles, I just liked the two of them the most. So we cast them, flew them out to Colorado, did some rehearsals, and I assigned the roles two days before we started shooting.

We also shot in my hometown, five minutes from where I grew up, so there was a really specific look I had in mind. James had a much cooler haircut when he landed so we had to shave his head, give him the military cut.

Watts: Empire of the Sun. No one is better than Spielberg when it comes to capturing the feeling about what it’s like being a kid — the fear, the excitement, the wonder. So many other directors just project adult ideas and personality back onto kids, but with Spielberg it feels true.

Filmmaker: How has your continued commercial and short form work informed your feature film directing?

Watts: There is zero influence. Deep character work with guys like Kevin and Shea, long complicated masters – you don’t get to do that on a commercial. But one great skill you do pick up is how to prep. Every detail — from casting to wardrobe to props — has to be approved by a crazy corporate hierarchy weeks before you shoot. So I’m very organized. I did a previz for the whole movie.