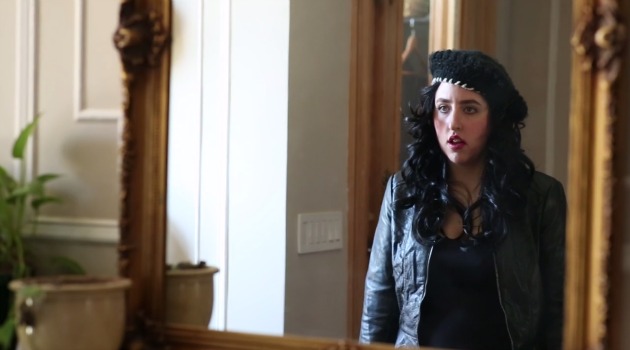 by Sarah Salovaara
in Directing, Distribution, Filmmaking
on Feb 26, 2015

You would think that the filmmaker behind such razor-sharp, atmospheric satires as Erica Wexler is Online and Perfect Thoughts would go for broke with an unsuspecting subject like Monica Lewinsky, but Doron Max Hagay had other plans when it came to designing his amusing new web series, Monica. “From the outset, I was dogged about not representing Monica’s story merely as satire,” says Hagay, who joined forces with actor Lily Marotta to loosely adapt “Monica Takes Manhattan,” the 2001 New York Magazine profile that detailed Lewinsky’s post-Clinton life in the big city. The first two episodes of the six part series are now available online, with subsequent episodes to roll out on Mondays. Filmmaker spoke to Hagay about balancing ambition with budget constraints, and his plans for season two.

Filmmaker: What came first: Lily’s “Monica’s Day Out” or your idea for Monica? Or was it just a meeting of the minds in the right place at the right time?

Doron Max Hagay: Lily and I each had our own specific interests in Monica when we met for the first time in 2012. I was hosting a weekly film screening at a pizza restaurant in the East Village, and a mutual friend showed me Lily’s “Monica’s Day Out” video, which she produced in 2008. By that point I had already become interested in Monica in Black & White and knew that I wanted to do a story about that moment. There was a lot of sharing of information – Lily showed me the New York Magazine piece, “Monica Takes Manhattan,” and I showed Lily Monica in Black & White. We had been talking about doing the project, unsure what it would be, for about a year before we actually started production.

Filmmaker: Did you source your inspiration for the storylines from any particular article(s)?

Hagay: The NYMag article, with its totally banal view into Monica’s personal life helped us understand who she was outside of the business of her image, but it also gave us a producible entry point into her story with our non-existent budget.  The article writes about Monica doing yoga, going on semi-blind dates, visiting MoMA (which we couldn’t get permission to shoot there), and designing handbags – these mostly ordinary events – and we chose to heighten the show’s stakes by putting the HBO plot at center instead of just focusing on the ordinary stuff that makes the article so fun.   Most of the preparation for the documentary is fictionalized in that we don’t really know what that process was like, but a lot of the rehearsed dialogue in the final episode is taken directly from the documentary.

Filmmaker: From start to finish, you mentioned that Monica took about a year to make. Can you give an overview of the process?

Hagay: We didn’t start production until about a year after Lily and I realized we shared an interest in Monica Lewinsky.  The thing that ignited production was a location – a townhouse that our friends were subletting.  The month-long sublet spurred us to get started.  We knew we could never afford or gain access to a space so perfectly suited for the character in its nicety and decor.  We shot all the home stuff in two days.  I imagined all the stuff we might need – Monica bathing, Monica cooking, Monica reading, Monica with wine, journaling in bed, trying on clothes in the mirror, doing yoga, etc. – basically ordinary stuff we all do at home because the story is so much centered on these kinds of activities.

From there we just did our best to keep momentum. In many ways the story emerged as a documentary does – scene by scene over a long period of time – although every scene was scripted and we knew where the story was going.  We wrote and filmed part six before having even written part four or five.

Filmmaker: Your previous films have used mockumentary as satire, but Monica takes Ms. Lewinsky at face value. The majority of the time, the jokes aren’t at her expense, and Lily plays her as the straight woman. Can you talk about how you two came to this characterization?

Hagay: From the outset I was dogged about not representing Monica’s story merely as satire.  I couldn’t imagine a more boring or redundant way to tell the story. It appealed to me very much to take a subject few people take seriously and represent her with real emotional depth and gravity.  The series begins light-hearted and a touch absurd – showing Monica in the yoga studio with her beret on in lotus – and in the first two parts she often enters frame sort of like a clown disrupting what is otherwise just a shot of a street or park. This transforms by the end of the series.  Monica’s crisis becomes very real.  At least I hope.

We expect people to bring associations to the story, and for this reason throughout production and in the writing-process we often eliminated references in the script that seemed too obvious as signifiers.  It’s not totally explicit that it’s Monica Lewinsky we’re dealing with in the first two episodes.  Her name is never mentioned in the people-on-the-street interviews at the top of part one, for example, nor are there any suggestions in the form of archival audio or video footage that one might expect of a show depicting such a mediatized woman. Instead we treated the character of Monica as a kind of melodramatic archetype – that of a woman dealing with tremendous emotional turmoil – and built the character from there, using the New York magazine article as a blinder with which to focus the events of the story.

Filmmaker: Did you have to come around to the concept of a web series, or did you immediately feel this was the best format for the story?

Hagay: Episodic always felt like the right format for this story.  I love certain tropes of episodic storytelling – cliffhangers, recurrence as a means of establishing importance and familiarity, potential spin-offs – but also the audio and visual language of television, which seemed fitting for the world that the New York magazine illustrates in “Monica Takes Manhattan.” In fact, the music in the show was taken from my friend Pierre Takal’s music library, which is often used by reality TV shows.

Filmmaker: The series is a great example of economy. I don’t mean that as a slight — you are fairly up front about not having any money for production — but each episode manages to unfold in (usually) one location and remain engrossing. How do you go about writing an episode arc for one scene?

Hagay: It was a practical choice to keep things simple and limit our locations, and crafting episodes around a single scene in one location felt really natural given our desired 4-7 minute length for each episode. All the actors and actresses in the show are really, really good; our format, hopefully, allows each of them to shine.  As far as writing story – every episode advances plot in some way. Every choice was made in service of story.  We were always asking ourselves so what?  Why is this important?  What are we saying? Never settling on something just because it was funny or entertaining.

Filmmaker: You mentioned you already have the second season written. Are you crowdfunding? Taking it straight into production? What’s your plan?

Hagay: I just finished writing three more parts. Lily and I have to go over them and adjust some stuff but for the most part they’re ready to go. We intended on having just the six, but it felt natural to keep writing.  I’ve come to see the first six parts as one act in a three-act story.  It might be necessary for us to raise a little bit of money because the new scripts are a little more ambitious in terms of location and what I want to do with my direction, but we really don’t want to crowdfund.  There are so many opportunities online, we’re hoping something comes up that might support us continuing the series. Or another series.