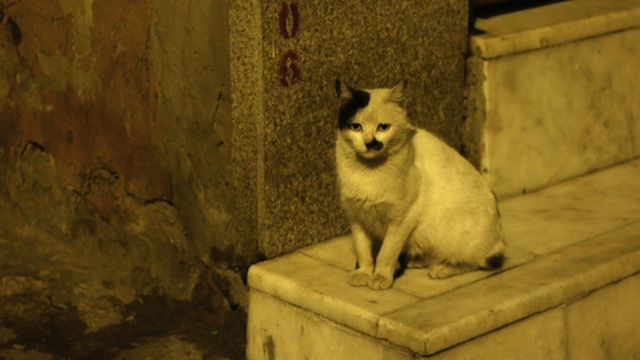 by Sarah Salovaara
in Directing, Directors, Filmmaking, Interviews
on Aug 5, 2015

Hewing closely to the tradition of documentary as diaristic essay, Jem Cohen’s Counting moves from New York to Sharjah as the cinema eye ruminates on street life, destruction, displacement and disparate urban portraiture. Divided into 15 chapters, Counting seldom forces any conclusions, drawing on the viewers’ emotional responses to its alternately lyrical structure and literal depictions — the removal of Brooklyn’s iconic Kentile Floors sign among them. Filmmaker spoke to Cohen about where Counting falls in the documentary tradition, and how his approach was not all that different from his most recent “narrative,” Museum Hours. Counting is now in theaters from Cinema Guild.

Filmmaker: What is your process on an essayistic travelogue such as this? Do you have a clear idea of what it’s going to encompass before you start filming, or does it stem from a collection of footage?

Jem Cohen: I think there’s a great documentary tradition predicated precisely on not knowing in advance what a film will encompass. Counting takes that road via a blend of city symphony, essay, diary — all of which, by necessity, unfold as the film is created. (For what it’s worth, Museum Hours carried the same strategy into the realm of the narrative feature). That said, I had plenty of ideas. I wanted to make a record of street life in a number of disparate cities within a limited time period, so as to measure recurrent ways in which people, animals, landscape, and politics interact within roughly the same global moment. I wanted to witness how displacement and real estate-driven destruction have become so interwoven into the fabric of urban life that they seem almost natural. I wanted to explore notions of observation vs. surveillance and to touch on the way protests spring up and seem, deceptively, to vanish. I wanted to indicate ways that music and animal life and light itself serve as antidotes, and so on. And I also wanted to make a film that by its own form questions the ways that documentary, even as it gains currency in the culture, is increasingly boxed in and expected to hew to formulas. So, I started by gathering footage from my archive, and then from my time in NYC and abroad, and then I’d shape it around certain themes or possibilities. Then I continued shooting and editing and dipping into my archives — all in parallel, rather than sequentially, the way most traditional movies are made. But it mostly all comes down to looking and listening carefully to the world, and then doing battle in the edit room.

Filmmaker: A portion of the film is dedicated to Chris Marker, and you do have the occasional cat imagery which plays as a nod in and of itself, but Counting diverges from Marker’s work in its use of audio to the point where the sound is often independent of the image. How did you structure the sound design in the edit? There is some clever interplay, especially in your use of NSA reportage and mirrors/reflections.

Cohen: The last chapter of the film was the first one I made and it was sparked by Marker’s death. I have enormous respect for his work, so that news hit me hard, as it did for countless filmmakers across the planet. It also inspired me to make that first piece, even if that was initially a private matter, not for release. Marker was exceptionally kind to a lot of filmmakers, myself included. We were in contact for over a decade. I sent him Garrett Scott’s first film, which he called a master work, and the crucial epigraph in Counting comes from an email he sent me after I told him about Garrett’s sudden death. Marker wasn’t the recluse that many think he was.

Regarding your question about sound, I would never have set out to make my film sound like a Marker film. Marker is Marker. You don’t try to make a Marker film any more than you try to make a Bresson film or a Cassavetes film or a Herzog film. Making something that comes out of the sadness felt by someone’s passing is a different matter. (And yes, the cats are in a way a repeated gesture of remembrance, but it’s also true that I would have shot them, regardless of this project, as I did the dogs and birds). But back to sound: I don’t think it’s ever independent of the image — they tango, even if they come from separate sources. I started with a lot of direct camera sound, in part because, unfortunately, I shot without a crew. In post, we’d carefully adjust it, sometimes drawing out elements or adding particular touches, or we’d toss it out and start from scratch. Sometimes we’d add layers that weren’t synchronous at all. I was happy to be collaborating closely with Ryan Billia at Rumble Audio, who really understood the project. For instance, one Moscow section incorporates aerospace sounds from Russian space missions which carry over into shots that have nothing to do with cosmonauts. But it’s subtle, almost subliminal at times. In other sections I use “found” voice-overs from street preachers, NSA hearings, a science lecture, and elsewhere, I did short interviews and collaged them. Sometimes, if rarely, I used pre-existing songs, and I wanted them to be totally present, not like background music or composed score.

Filmmaker: Museum Hours was an incredibly detailed character study that managed to incorporate elements of essay films. Is there a great difference to you, with respect to outcomes, in allowing your camera to observe organically versus shooting what has previously been outlined? Do you find that an observational documentary such as this still forges its own narrative through line based on your recurring interests?

Cohen: Even with Museum Hours, I’m rarely using a script in a traditional way. Sometimes one character is scripted but the other isn’t, sometimes there’s a carefully written scene or voice-over, sometimes characters are freely riffing around a given outline and may not even know when the “scene” starts or ends — so I’m “documenting” what is essentially a real conversation. In any case, much is discovered and shaped in the edit, so I don’t draw clear distinctions between shooting organically vs. previously outlining, or between narrative and documentary projects as a whole. With Counting, the recurrent interests, echoes, and through-lines do shape the film and, especially with more than one viewing, it becomes apparent that it’s much less random than it may seem. I don’t know that I’d use the word “narrative” though.

Filmmaker: In Museum Hours you also had significant access to shoot at the Kunsthistorisches. Practically speaking, is there a permitting process for filming such places as the Kremlin, or do people typically let you film where you please given your unobtrusive crew of one?

Cohen: I didn’t have the time or capacity to get permissions for a deserted back alley in Porto, much less at the Kremlin. I tried to keep a low profile and took my chances. If they’re going to display a bust of Stalin, and allow people to put flowers on it, I think it’s important to document that. But it wasn’t a problem to shoot there.