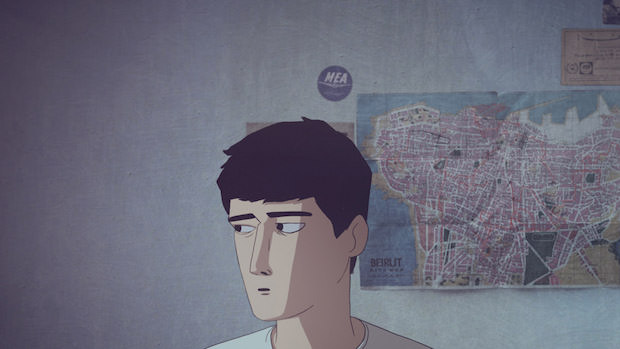 by Soheil Rezayazdi
in Actors, Cinematography, Filmmaking, Interviews
on Jan 31, 2016

Winner of the Palme d’Or for Best Short Film at the 2015 Cannes Film Festival, Waves ’98 is the debut film from writer/director/animator Ely Dagher. The film is set in Beirut – Dagher’s hometown – and concerns a young man who becomes isolated from reality. Filmmaker spoke with Dagher about the film’s blend of video footage, still photography and animation. The Sundance Film Festival presented Waves ’98 in 2016 as part of its Animation Spotlight shorts program.

Dagher: Waves ’98 is a complex mix of live footage, photography and animation, and in order to make sure it all flows properly and seamlessly I had to take on the role of cinematographer and make sure I get the image I had envisioned.

Dagher: The cinematography’s role in the storytelling is elemental and pushes the story forward. My film is very much about the actual experience of watching it. The mix of different mediums in the film is also at the core of what the film is about and how the characters and the city exist together. In a way the cinematography tells part of the story on its own

Dagher: Not directly but I would probably say Dario Argento and David Lynch in terms of the colors.

Dagher: The biggest challenge was getting it right for every single shot.

Dagher: I just used the Canon 7D because it was enough for my needs and I could do both the photography and the filming without having to change equipment or risk the light changing at a later stage since it was all in natural light.

Dagher: Probably the highway scenes with all the cars. There was a lot of post-production to be done on those and it was a bit tricky.

Dagher: Given the nature of the film, the look was completely realized in post production when all the compositing was done. Mixing the footage with the photography and animation scene by scene.