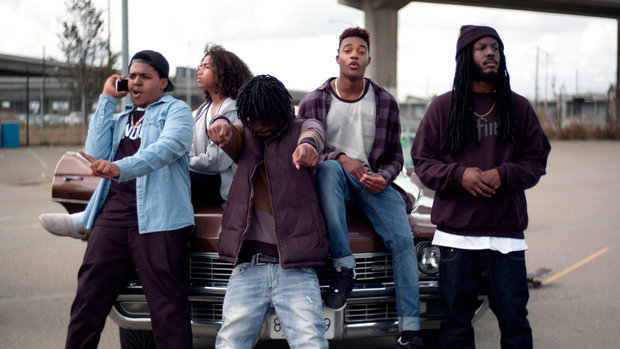 by Paula Bernstein
in Directing, Directors, Festivals & Events
on Apr 15, 2016

The Tribeca Film Festival kicked off on April 14 with the opening night premiere of Justin Tipping’s Kicks, an ambitious coming-of-age film set in an inner city enclave in Northern California. Though it’s Tipping’s feature debut, he’s far from a novice filmmaker, having already won a Student Academy Award and the Lexus Short Film competition.

The semi-autobiographical Kicks focuses on 15-year-old Brandon (newcomer Jahking Guillory in a breakout performance), who buys himself a sweet new pair of “kicks.” But when the local hood snatches them, Brandon goes on a mission to retrieve his new stolen sneakers with his best buddies’ help. Along the way, he confronts violence — and society’s notions of masculinity.

Filmmaker recently chatted with Tipping about his assured feature debut, the challenges of working with children and how a personal experience inspired the story of Kicks.

Filmmaker: I know you spent a semester abroad in Rome. How much were you influenced by the Italian neorealists? Kicks can certainly be seen as a contemporary Bicycle Thief. Was that your intention?

Justin Tipping:  You are spot on. Like most college kids, I was confused. I was trying to do Business Economics, which was a big mistake all around. I didn’t know what to do so I decided to take a semester abroad. In Rome, I studied Italian cinema and it changed my entire course of life because I came back and switched to film and media studies. That entire [Italian neorealist] movement had a big influence on me as a filmmaker, especially the kinds of stories they were telling. They were telling stories about people on the fringes of society and outcasts and the lower working class, really intimate subjects.

In terms of deciding what story to tell, The Bicycle Thief got me thinking how much this one object can mean to someone, how it can have all this emotional weight. When developing the idea of Kicks, I was definitely referencing that. It kind of gave an emotional structure to it. Then I was also watching Fellini films and the dream sequences in 8 1/2, which I referenced with the astronaut sequences in Kicks.

Filmmaker:  You were childhood friends with Ryan Coogler. How did his filmmaking trajectory influence you?

Tipping: I’ve known him since I was a kid. One of my best friends was one of his best friends, so we went to different schools, but I’d always see him at parties. Our friend had an editing system and a microphone so we would literally run into each other while I would be trying to rap in a closet or edit a really bad music video. To see him doing what he’s doing, it’s  inspiring and I think he paved the way for me in a lot of ways. The success of Fruitvale Station for sure let audiences know you can make a movie about people of color and still have an impact and people will go see it. I think that’s helped me and my scripts get off the ground.

Filmmaker: How important was film school to your development as a filmmaker?

Tipping: It was really important for me. I’m a firm believer you don’t need film school to be a great filmmaker. For me, it was beneficial. I literally had no idea you could even have a career in film until two years into college. It never crossed my mind. Studying film history and film theory exposed me to so many different styles and filmmakers and movements. It gave me a great foundation of visual vocabulatory. It was a lot of theory and analysis and opened my mind up to the fact that it’s a big deal to be able to tell a story that will maybe affect maybe millions of people forever, to put a story onscreen. In studying film history and the lack of representation of so many people and stories, I realized you can complain about it all you want. Why don’t I just go out and tell those stories? That’s what sparked my “I need to go make movies.” It’s something I have to do. Then I went to AFI as a way to get more production experience, because film theory doesn’t really focus on the craft. AFI allowed me to get in there and make films.

Filmmaker: I read somewhere that you had your new “kicks” stolen when you were a teenager. I’m guessing there was an autobiographical element to the story. Can you talk about that a bit?

Tipping: Yeah, I was jumped over a pair of Nikes. It was much like it was in the movie. I had the white-on-white-on-white-on-white custom NikeIDs with my nickname engraved on them. I thought I was on top of the world. I was approaching a group of guys. I knew I was in the wrong part of town anyway. It was a kind of sketchy situation and I thought, “Oh, I’ll just keep my head down and keep walking. I’ll be fine.”

The first thing I heard anyone say was, “Oh, he’s got the Prestos.” And I thought, “Oh, this is not going to go well.” The short story is I got jumped for my kicks. But they actually didn’t ultimately didn’t even take my shoes, which was even crazier to me. They literally stomped me out — I was laid out and beaten really quickly. Someone walked by, so they got back in the car and drove off. They just left me there. It was a completely nonsensical act of violence which initially started because they saw me as a target because I was wearing brand new shoes. I was sitting there with them on but humiliated, with other kids walking by going “you got fucked up, man” and talking shit to me.

It was that feeling that he wanted the shoes, like Brandon in the movie. He’s got what he wants, but it’s a false victory. Then the real emotional impetus being when my brother saw my face and was like, “Well, it’s okay, you’re a man now.” It made me proud for a split second and then extremely sad. In retrospect, I look back on it and was like “That’s bullshit. How the hell does getting beat make you a man?” Then it became more of, why is masculinity in our society always synonymous with violence? That’s something I wanted to explore, the cycle of violence and how it’s perpetuated. I try to focus the world [in the film] around those themes.

Filmmaker: What would you say was the biggest obstacle in terms of production?

Tipping: The biggest obstacle was having a 13-year-old in every scene. If it wasn’t a 13-year-old, it was a 6-year-old, so our hours were absolutely cut in half and it completely affected the scheduling of the movie. Sometimes I would be reading lines with some of the kids as [the actor playing] Brandon couldn’t start filming yet, but we wanted to start setting up and get coverage for the scenes. All of the night scenes are pretty much day-for-night because he couldn’t stay out past a certain time. We were actually re-writing while we were shooting to accommodate the ever-changing schedule. That’s intense.

Filmmaker: What do you wish you had known before you started production on Kicks?

Tipping: I wish I actually learned how to sleep while shooting a movie, learn how to relax at the end of the day because it’s so taxing. I look back and I was freaking out over every detail. You’ve got to just accept that things will go wrong and you have to be calm and just know the story so if anything changes, you don’t sacrifice anything else for the story. The best thing to do is be calm. It sets the tone for everyone else on the crew too. If I ever wanted to freak out, I would walk away for a minute and take a deep breath. At the end of the day, you’re making a movie.