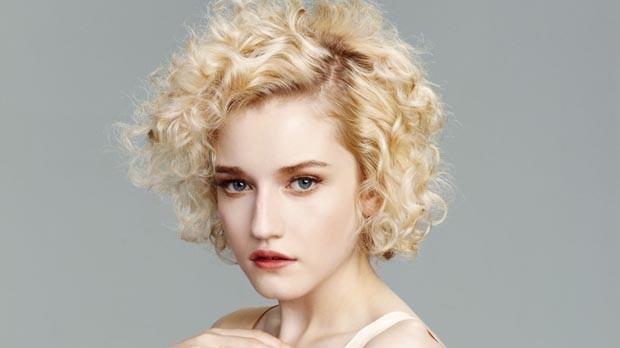 When I get on the phone with Julia Garner, she has just returned from the Catskills and her eighth feature since breaking into film last year in Sean Durkin’s Martha Marcy May Marlene. Garner played a vulnerable young cultist in that movie, and in her latest shoot, Jim Mickle’s We Are What We Are, she is one of two cannibal sisters. Cannibals are the topic du jour, but Garner is matter-of-fact about the role. “[The movie] is mostly about how [the sisters] relate to their mother’s death,” she says. “It’s weird — they don’t exactly know what they are, and they don’t know much harm they do.”

With her ethereal look — pale skin, red lipstick and a mass of tight blonde curls — it’s not surprising that Garner has played otherworldly characters. But what’s striking about Garner is not just her presence, but also the utter naturalness of her performances. In her first lead role, in Rebecca Thomas’s Electrick Children, she plays a Mormon teenager, a preacher’s daughter who dresses in Amish-style clothes. Believing herself to have been impregnated just by the sound waves of a Blondie cover band, she runs away from her small town to find the singer who must be the father of her child. It’s a loopy premise, but Garner plays it with a guileless and magnetic sincerity.

For Electrick Children, Garner says she studied up on Mormonism but, like most of her parts, didn’t try to overthink her character. “I try to keep it natural,” she says. “I want things to feel as real as possible. I just try to think like [my characters] and do whatever I’m feeling.”

Born in Riverdale, N.Y., Garner, 18, is the daughter of a therapist (her mother) and an art teacher. She was only 16 when she heard, through a friend, about an open call organized by casting director Susan Shopmaker for Martha Marcy May Marlene. She got the part and has been nailing auditions since. Of Electrick Children, Garner says the filmmakers were in prep “but couldn’t find the girl.” She self-taped her audition on a Monday, got the part on a Wednesday and was shooting the following Tuesday. Next Garner is appearing in a number of promising features, including Robinson Devor’s period crime drama You Can’t Win, David Chase’s Not Fade Away and Leah Meyerhoff’s coming-of-age drama Unicorns.

In terms of best-loved movies, Garner cites a diverse group including Annie Hall, Rosemary’s Baby, Babel and Ernst Lubitsch’s 1928 The Student Prince in Old Heidelberg. The latter she saw where she has seen many films — on the couch with her parents tuned to Turner Classic Movies. It was on one of these family movie dates she discovered another favorite movie, All About Eve, and her “all-time favorite actress,” Bette Davis. She was “little,” she says at the time, but the qualities she admires in Davis are clearly the ones she is aspiring toward now: “The first thing I noticed is that I forgot she was acting. She just lights up the screen.”