“We Found That Securing Institutions And Private Funders Was More Viable After We Could Share The Breadth Of The Film In A Meaningful Way”: Hunter Robert Baker And Jordan Fein On Their DOC NYC-Premiering The Blessing 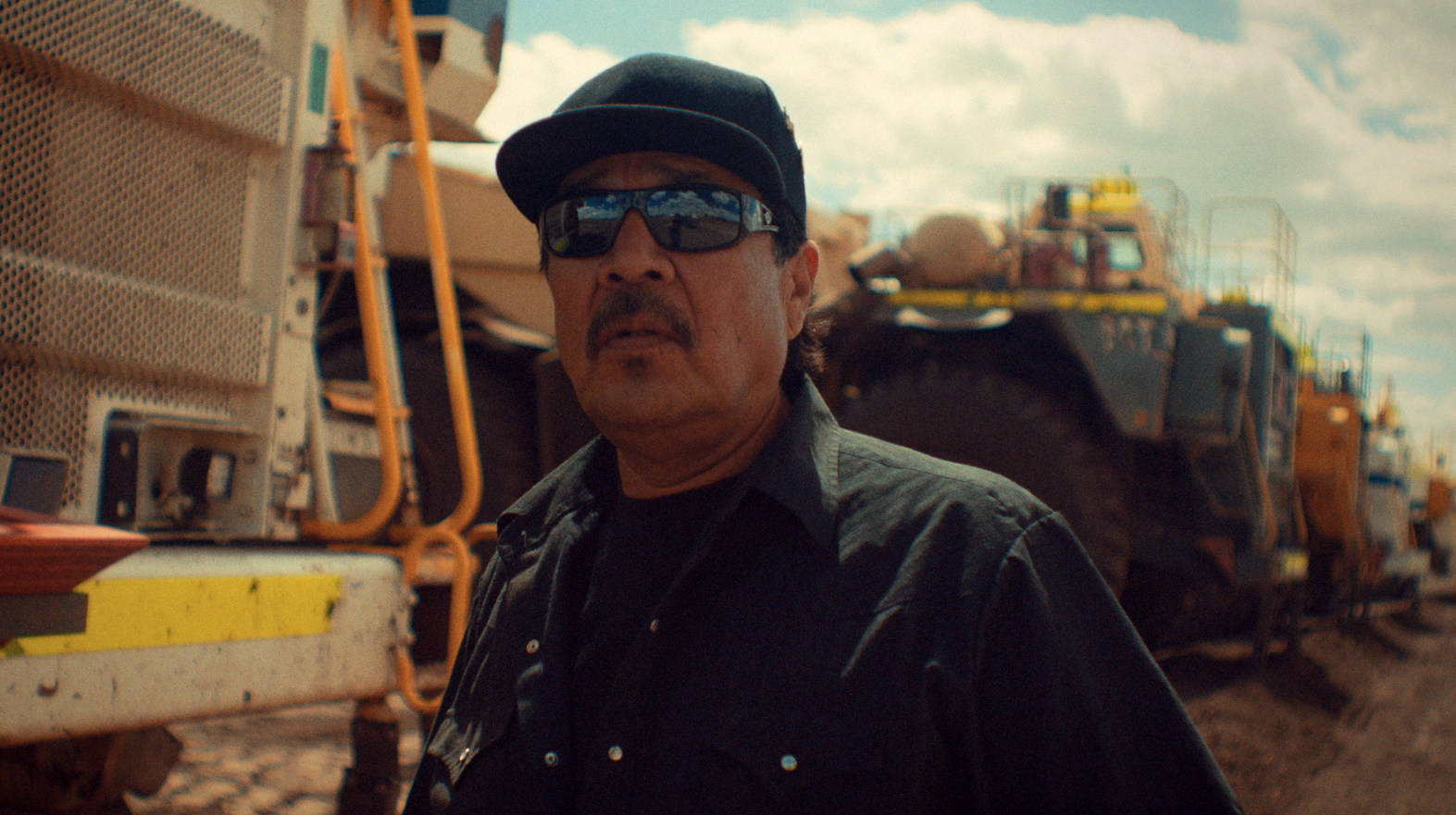 The Blessing, the latest from the Emmy Award-winning team of Hunter Robert Baker and Jordan Fein, is the story of a Navajo coal miner and single dad as well as his teenage daughter, who navigate life on their reservation in northern Arizona. Other than Erick Stoll and Chase Whiteside’s stealthy stunner América, I can’t think of another documentary I’ve seen this year in which the simplest of premises yields such an emotional powder keg. The film’s a nearly Shakespearean drama, one in which a deeply religious father is forced to choose between sacrilege (taking part in the destruction of his sacred tribal mountain) and feeding his kid (as coal mining is the sole industry on the rez). Meanwhile his daughter is forced to choose between saving her mentally and physically exhausted dad from any further stress and being true to herself (she has a passion for playing football, not running cross country like her siblings).

Filmmaker caught up with the acutely attuned co-directors to learn more about their riveting film prior to The Blessing’s November 9th premiere at DOC NYC.

Filmmaker: How did you meet Lawrence and his daughter Caitlin, and what made you think they’d make such fascinating characters for a film?

Baker and Fein: Five years ago we crossed paths with Lawrence on the production of a narrative film captured on the Navajo Nation. He’s a tall charismatic man with tremendous radiating presence. We forged an immediate bond predicated on the idea that he had a profound story that he wanted to tell. Neither of us knew what the film would become – or that year after year we’d turn back to a hand-drawn map to navigate red earthen roads to the remote part of the United States that Lawrence and his family call home.

Filmmaker: I’m quite curious to hear about the Native American aspect of the production. Who on your team is indigenous, and how did that affect the filmmaking?

Baker and Fein: From the on-set we formed an advisory team of producers, advocates, and curators, as well as respected voices from within the indigenous community, to guide The Blessing into a film that has gone on to resonate with audiences across the world.

Our executive producer, renowned Native actor Raoul Max Trujillo [ed. who has appeared in films such as Apocalypto, The New World and Sicario], has had a distinguished career of helping bring indigenous stories to the forefront of modern conversation for more than 30 years. Raoul recognized that we don’t often see such a closely told, hope-filled story like this from the reservation. He was committed to working with us in crafting a film meaningful to him and his community. Raoul helped forge a powerful relationship with the IAIA Museum of Contemporary Native Arts in Santa Fe, where private screenings allowed for crucial feedback, and an open conversation on the film with respected scholars and filmmakers who focus on the representation of indigenous cultures in film. [Ed. Museum Director Patsy Phillips has even called the film a “vital piece of Native storytelling.”]

We then turned to Native director and producer Christina King [of Warrior Women, We the Animals], who screened cuts and worked with our team in the shaping of the story. We worked in tandem with Blossom Johnson, a Navajo playwright and dramaturgist based in New York, who carefully translated the film and served as an ongoing advisor from a story and cultural standpoint. She grew up in the Black Mesa, which is the area at the center of the film.

About a quarter of the film is actually captured by a helmet-mounted camera worn by Lawrence in the coal mine. This turned out to be some of our most impactful material, the things he wanted us to see when no one else was around. He eventually took the camera off of the helmet and brought us closer to some of the most personal moments in his life that the big cinema camera could not. Those largely uncut sections in the film are as raw and honest as you can get from a documentary standpoint.

Lawrence’s voice and songs are the audio guide to The Blessing, as he moves the story forward over five years of his life. The film opens the door to a family on the Navajo Nation through a deep and longstanding trust between subject and filmmaker.

Filmmaker: I actually missed seeing the film at Full Frame, but ended up catching it at the Santa Fe Independent Film Festival, where the audience was both riveted and seemed a bit more diverse than at other fests, where there isn’t a large Native American population. (That’s not to mention Native filmmakers. I know Smoke Signals director Chris Eyre at least showed up to your screening.) Have you noticed a difference in audience response, especially with questions asked during Q&As when there are actual indigenous people in the crowd?

Baker and Fein: All audiences have responded alike: overwhelmed with great emotion by the intimate story of a family learning to love more deeply, and with curiosity as to what the future holds for Lawrence, Caitlin and Navajo Nation.

All of our screenings have had audience members who are indigenous or have a relationship with indigenous communities. At a huge screening of about 500 people at the Ashland Independent Film Festival, a man came up to us after the screening and said, “Your film began, and I saw the scars across Lawrence’s chest from a Sun Dance ceremony. I am Lakota and I know that man, I was there at his ceremony.” That ceremony had occurred 20 years prior. He was as surprised as we were in a connection forged hundreds of miles away from his homeland and Lawrence’s.

The Santa Fe Independent Film Festival’s ten-year anniversary was a very meaningful screening for our film, as it brought together Lawrence, Caitlin and their family from Navajo Nation, with the vibrant local community that supports stories like this wholeheartedly. We’re honored by director and producer Chris Eyre’s ongoing support for The Blessing, and that he was in the audience. Just one week prior to the Santa Fe Independent Film Festival Chris led the jury at the Bend Film Festival, where he presented our film with the Best Native Feature Award.

Filmmaker: I’m also wondering about the funding. The film was a five-year process. Were IDA and the Points North Institute involved from the start?

Baker and Fein: When we met Lawrence, the story was already underway. We brought together the resources we had to start shooting right away. The modernization of the energy industry and the global economy divesting in coal was rippling into Lawrence’s community. This was years before The New York Times was reporting on these issues of mineral extraction on tribal land.

Most people across the United States had no idea that one of the world’s largest coal-fired power plants was deep in the heart of Navajo Nation, fueled by a 100 billion dollar deposit of high grade bituminous coal buried in a sacred mountain. People also didn’t know that an almost entirely Native workforce performed this operation, daily blasting their sacred Black Mesa mountain in order to provide for their families.

Lawrence was caught in this spiritual turmoil while trying to raise five children all on his own. His youngest daughter Caitlin was in high school, living some of the best years of her life, while her dad was facing some of most difficult. Between them there were secrets. She wanted to be a football player on the men’s varsity team, but more importantly, she wanted her father’s love and respect in being the person she wanted to be.

Our initial shoot with Lawrence and Caitlin showed the story was not only timely, but also complicated. We took almost two years to garner the trust of our subjects and the understanding of the complexities of these issues in order to feel confident in sharing this story for organizational support.

The Blessing was ultimately supported by the International Documentary Association. IDA is a tremendously thoughtful organization that has supported compassionate nonfiction filmmaking for over 35 years. We applied for their grant program and received the Pare Lorentz Grant. The organization has been tremendously supportive of our film and the way it was made. We are so thankful to them for their encouragement throughout the past few years.

We also participated in the Points North Fellowship, a public forum where a panel of distinguished funders, broadcasters and producers learn about your film and give critical feedback. The forum was the first time the film was introduced to the world. Compared to most films pitching, which were already in post-production, The Blessing was only a year into principal production. That organization truly believed in and supported the future of the film by including the film in the forum while we were still very much in progress of finding the story.

The funding turning point happened when we were invited to speak on a panel at the Impact Haus during the 2016 Sundance Film Festival by the directors of Whose Streets?, Sabaah Folayan and Damon Davis, who allowed us to join them in a discussion with [documentarian] Stanley Nelson about our film’s message and progress.

The funding from IDA meant we were able to spend more time on the reservation with Lawrence and Caitlin, and round out a more robust crew for longer and more involved shoots. And it was the stories we were bringing home to our edit that kept this going. By the time we felt we had enough footage to tell this story we were able to secure the finishing funds. Verité style documentaries are a challenge to fund; you don’t know where the story is going until you have it in the can. We found that securing institutions and private funders was more viable after we could share the breadth of the film in a meaningful way.

Filmmaker: Do you have an impact campaign in the works? The film is such a clear-eyed distillation of the harm longtime environmental policies (or lack thereof) are doing not just to the environment, an abstract concept to many, but to actual people’s lives — something more concrete for most folks.

Baker and Fein: BritDoc’s Flannery Miller [Whose Streets?] is our strategic producer, and throughout our production we targeted what messaging from the film was actionable, and how our audience could engage with this story after it ended — especially as the politics of mineral extraction on tribal land has vacillated so heavily with the new administration in Washington.

Visibility for a story like The Blessing is vital, especially in tribal communities. With the help of state representatives like Wenona Benally [of legislative district 7 in Arizona] and the IAIA Museum of Contemporary Native Arts [in Santa Fe] we will tour the film and bring its message of hope to places that don’t have immediate access to either a streaming or theatrical experience.