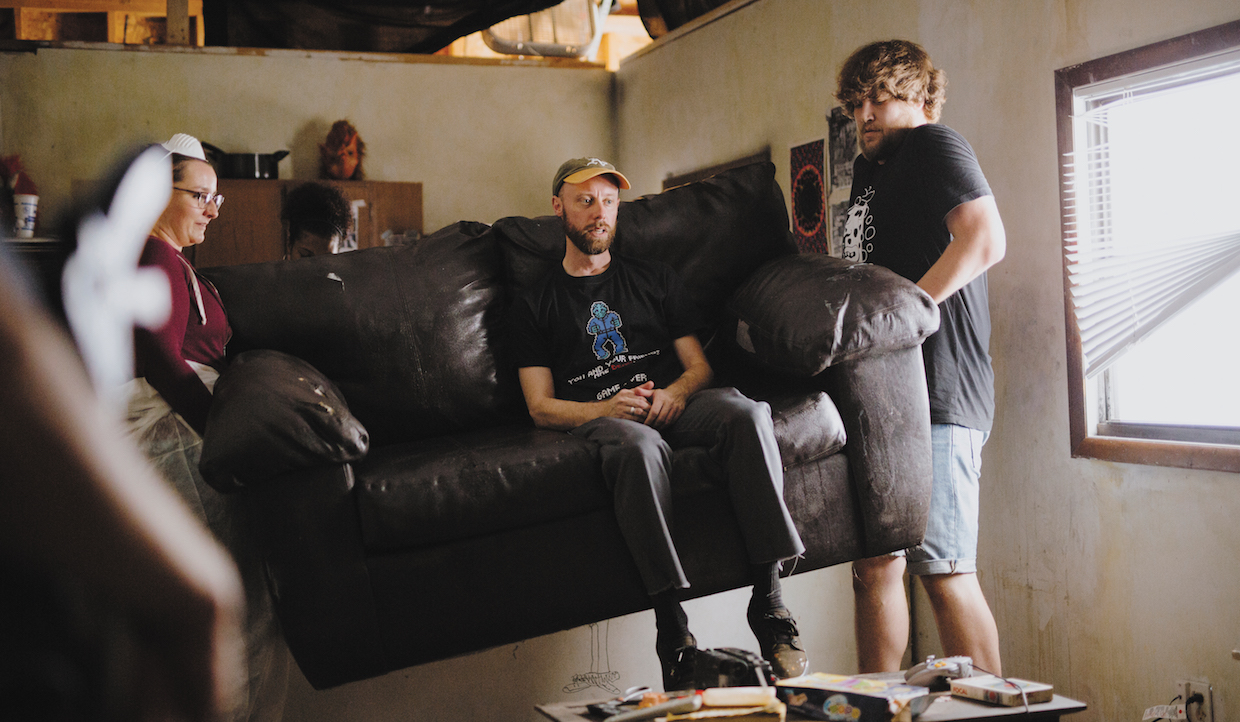 by Joel Potrykus
in Directing, Filmmaking, Issues
on Mar 14, 2019

We were a week away from principal photography on my fourth feature film, Relaxer, and I wanted to run away. Production designer Mike Saunders and I had been building our apartment set inside his parents’ two-car garage, and things were taking too long. The entire shoot was to happen in that garage, so it had to be perfect. It didn’t look like it’d ever be ready, and I was stressing hard. My stomach burned. I couldn’t keep anything down. I’d been losing weight. I just wanted to sleep for three weeks and wake up with a finished film, but I was too anxious to even close my eyes. I could only lie on the couch, staring at the ceiling, too tired to get up. I was about to shoot a film about a guy who can’t get off a couch, and I couldn’t appreciate the irony that I was stuck in the same spot. I was making a film called Relaxer and I couldn’t relax. Anxiety, stress, pressure, panic, fear, dread—whatever it is, there are certain nerves in the body that are only triggered by filmmaking.

When I was at film school, a professor said, “If you don’t love being on set, if a bad day on set isn’t better than a good day at home, then you’re not cut out to be a director.” Those words stuck with me and weighed me down for a long time. At home, I can watch movies and play video games and take naps. I’m envious of directors who look forward to being on set. The writing and editing is a luxury. But I dread set life. After making three features with these great friends, I’d assumed the dread would give way to confidence. Joshua Burge was back, and I should’ve been cool. But things got worse prepping for Relaxer. I questioned my reasons for going through with it all over again.

Most of my adult life was spent waiting around for my nerves to settle before I made my first feature. The thought of tackling something that ambitious gave me butterflies. The butterflies never went away, so in an attempt to battle demons of future regret, I set out to make a feature called Ape. However, I approached it differently. I restricted the production and left out the unnecessary mechanisms, the headache inducers, of a traditional set. It was not to feel like a construction site. No light kits. No tracks. No dollies. No jibs. No sliders. No unions. No contracts. No insurance. No permits. No yelling. No executives. No interference. Only friends. We all get paid the same. Four-hour shoot days. And we’re staying in Michigan, no matter what.

But as Ape, and then Buzzard, began finding an audience, my ambitions got bigger. Bigger ambitions, more money. More money, more people. The Alchemist Cookbook had a real crew. And insurance. And release forms. And receipts. And location agreements. And a production office. And talent trailers. And all the ridiculous headaches that only go into creating a film. I wanted to reverse time and become a painter instead. Picasso never had to deal with lawyers and agents. He didn’t need E&O insurance for “Guernica.” He owned his brushes; he didn’t rent them. No PAs needed to set up the canvas. No PAs spilling paint on his battery chargers. At this point, I had 24 talented crewmembers trying to make my job easier, and you’d think it would’ve helped. I threw up every morning while shooting The Alchemist Cookbook.

People said the stress leading up to shooting Relaxer was owing to a number of things: I was closing on my first house, I was about to start a full-time teaching job in a month, I was in the middle of grad school, and I just found out that I was going to be a father. In nine months, my girlfriend, partner, producer, stress-whisperer Ashley Young and I were going to be sorting out much bigger issues than keeping a two-car garage air conditioned in July. Even bigger than rehearsing for our $6,000 one-take exploding head. Maybe all of these changes contributed to the nausea, but it felt like it was just the movie. People told me to exercise the stress away. But my heart was too fast, and my legs couldn’t keep up. Breathing exercises made me light-headed. Meditation felt more like time to silently obsess even more about everything that still needed to be done. I even took time to give talks on anxiety, hoping that saying it out loud would chill me out.

Around this time, I’d scored Obamacare and had access to a doctor. She put me on Celexa for the anxiety, but it wasn’t cutting it. So she prescribed me a therapist. I went in ready to fully clear my head, but I didn’t get the quick-fix mantra or mathematical equation that solved everything like I wanted. I stopped going after two sessions. I know that a nervous breakdown isn’t a medical condition, but I was in the middle of a nervous breakdown. Or maybe just a panic attack. With the tingles running through my arms and my heart slamming fast and heavy, I drove myself to the emergency room using my wrists—my last-ditch effort in search of some type of magic pill or spell before day one of production.

I found peace at the hospital. It felt like a place where pre-production couldn’t happen. I could escape the movie for a while. And it gave me the chance to confess all my dramatic ailments to someone who could send me off with the magic elixirs I’d been wanting all along. The ER doc gave me an ondansetron tablet to dissolve on my tongue for the nausea. (It’s a pill used to treat morning sickness.) I left an hour later energized and with more filmmaking chemicals to add to my master list:

I survived the shoot losing 15 pounds off a frame that that didn’t have 15 pounds to spare. My throat burned. I couldn’t get rid of my headache. But my brain was intact. And for the very first time, these friends and I made the exact movie that I had envisioned from the start.

I still haven’t found the root of this problem, and likely may never. I’m normally a levelheaded guy, even-keeled to a fault sometimes. It’s just these movies that drive me crazy. Maybe Relaxer couldn’t have happened without the stress. Maybe you do have to suffer for your art. Maybe the next one will be easier, but not likely. At this point, I just have to accept that I probably make movies because I’d be depressed if I weren’t making movies.