Filmmaker and its friends and colleagues tell you some of our favorite apps.

GoodReader (iPhone, iPad) GoodReader is terrific for script reading. You can widen the type to fit the page and then lock the scroll vertically. It’s by far the best way I’ve found to read screenplays. — Jason Kliot, producer

Keynote Keynote for the iPad is breathtaking. It was cool to be able to show the presentation for a new project to the head of Arte at 12:45 a.m. on the third level of the Arte yacht in Cannes during a pretty loud party with a d.j. on. There is something beautiful yet intimate about the app — creating work with sound and images feels like something between finger painting and Minority Report. — J.K.

ShakeItPhoto Polaroid film is no longer being made so this iPhone app has brought back to life the instant fervent visual of one of the greatest inventions of all time. Life is better with ShakeItPhoto. — Marianna Palka, director

Qik I have found myself using Qik on set to share live videos from our shoots with Twitter followers, Facebook friends and Kickstarter backers. Here are some of those videos: http://qik.com/arincrumley/videos. — Arin Crumley, director

20 Minute Meals Jamie Oliver’s iPhone/iPad app 20 Minute Meals is awesome. Meals take me an hour, though. Reminder to wrap phone or iPad in cling wrap. Works like a charm. — J.K.

The Nexus One phone I’m using the Nexus One and loving it. Android is really cool — I love how open it is. The other day I was location scouting and it dawned on me that in addition to an SLR still I should take a picture with the Nexus One because it records geo information and will help me plot that exact same spot on a map. This begs the question of whether or not there is a location scouting application. If so that would be a neat one I could see a lot of filmmakers using. — A.C.

Photoshop for Android A really fun app is Photoshop, which you can install on Android and have a miniature version of Photoshop right on your phone. — A.C.

ANDROID APPS ON THE NEXUS ONE The most helpful thing to me right now is my Android phone (the Nexus One), particularly the way I’ve figured out how to sync everything. I have e-mail, contacts and my calendar all synchronized across my phone, Web apps (mostly Google), my MacBook and my second laptop, which runs Ubuntu. As a nice little bonus, Android imports all my Facebook friends into my contacts. And I can click on any appointment or contact to get a map and directions to wherever I’m going. The whole setup is indispensable for keeping all my appointments. Managing a film festival schedule as well as I do would be impossible without all that. And since I can tether my laptop to my Android phone (using PdaNet), I can work from anywhere. (I think the next version of Android is supposed to support tethering without PdaNet.) — Brian Chirls, director

Freedom and Anti-Social It used to be that productivity was about connecting to other people — talking, collaborating, meeting and sharing. And research used to be a good thing. That was before the ’net turned us all into rats in a Skinner experiment, sure that the message boards, Twitter feeds and Facebook accounts we check again and again are more interesting than the projects we are trying to finish. Freedom, for Mac OS, allows you to get work done by severing your Internet connection for just a few minutes or up to eight hours. Need a more specific online shutdown? Anti-Social blocks social networking sites only. Comments developer Fred Stutzman, “Freedom and Anti-Social turn computers back into machines of work (as opposed to machines of distraction) and create an environment for serious productivity.” Find both at Mac Freedom. — Scott Macaulay

CamCalc and pCam Over the Summer I shot some of Ralph Lauren’s summer line on a Panasonic HPX2000. Ralph Lauren does an online virtual runway which, on the production side, consists of models walking in front of green screens; for the website, the green screens are later replaced with, you guessed it, a runway. I started thinking about a runway configuration and how the models will be covering a fair amount of distance from back to front, requiring deep focus if they’re to look sharp the whole way. I turned to my trusty Android phone and searched the app market, where I discovered CamCalc. CamCalc features calculators for depth of field, field of view, focal length equivalents, flash calculations, color temperature conversion and miniatures. It includes data for most popular still and movie cameras (although not the exact 2/3 16:9 chip on the HPX) and displays results graphically. There’s a free ad-supported version and a $1.99 paid version, which just removes ads as far as I can tell. Using CamCalc, I can input the sensor size, focal length and aperture of the camera and know exactly how much depth of field I’ll have to keep the presumably leggy models in focus. If you’re an iPhone user and are interested in something similar, try the more expensive (but more feature-rich) pCAM. — Koo, director (read more at No Film School.)

Numbers If you have a Mac there is no reason why you should be using Excel when there is Numbers — much more intuitive, many more capabilities including adding media and instant charts, and you can import and export to Excel documents anyway. Watch the tutorial and get hooked. — Kevin K. Shah, producer

Shoeboxed.com I’m obsessed with Shoeboxed.com. I love being able to come home after a shoot or a festival trip, dump my receipts into the blue bag and send off all the paper (including business cards) and have them digitized and exported to whatever file format I need. Less clutter, and I’m always able to find everything come tax time. And, I can forward them all my digital receipts as well…sweet! — E.R. 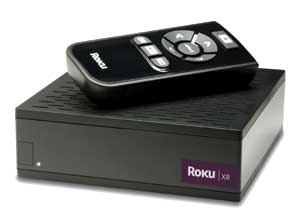 is terrific and gives you access to Amazon on Demand movies

, which you buy in HD or SD through your Amazon account. And also, if you are a Netflix member, the Roku allows you to stream your “watch instantly” queue films. Netflix on the Web creates two queues, your watch-instantly queue and your DVD queue. Unlike the iPad, the Roku box just lists all the watch-now queue movies and you can choose what you want to watch. But you can’t add a new movie to that list through the Roku Box. Which is where the iPhone comes in. If I want to add a watch-instantly movie to my queue and watch it on the Roku, I can use my iPhone and Netflix Instant Queue (IQ) to add a movie to the queue and watch it on the Roku box. Boy, that sounds complicated but it’s quite easy! — J.K.

Bump Bump (for both Android and iPhone) is great for quickly exchanging contact info at networking events, but I wish more people used it. — B.C.

Exit Strategy Exit Strategy NYC Subway Map (for iPhone/iPad) is the only way to go! It tells you which subway car to get into for a quick exit when you get to your destination. — J.K.

Google Documents For proposal and treatment writing I cannot live without Google docs, both for simple budgets and for text. The ability to share docs with collaborators all over the globe is key. — E.R. 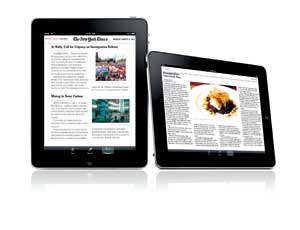 Editor’s Choice Some people seem to be down on the New York Times’ Editor’s Choice app for iPad. It’s not the whole newspaper, you can’t comment, and there aren’t many bells and whistles. I guess that’s why I like it. After glancing through the hundreds of articles that appear overnight through my RSS reader (Reeder, also recommended), there’s something beautifully direct and focused about Editor’s Choice. Stories I’ve just glanced at on the Web I find myself actually reading when I open up this app on my iPad