“I Wanted To Make Sure the Film Felt Lived In”: Editor Ryan Kendrick on Sometimes I Think About Dying 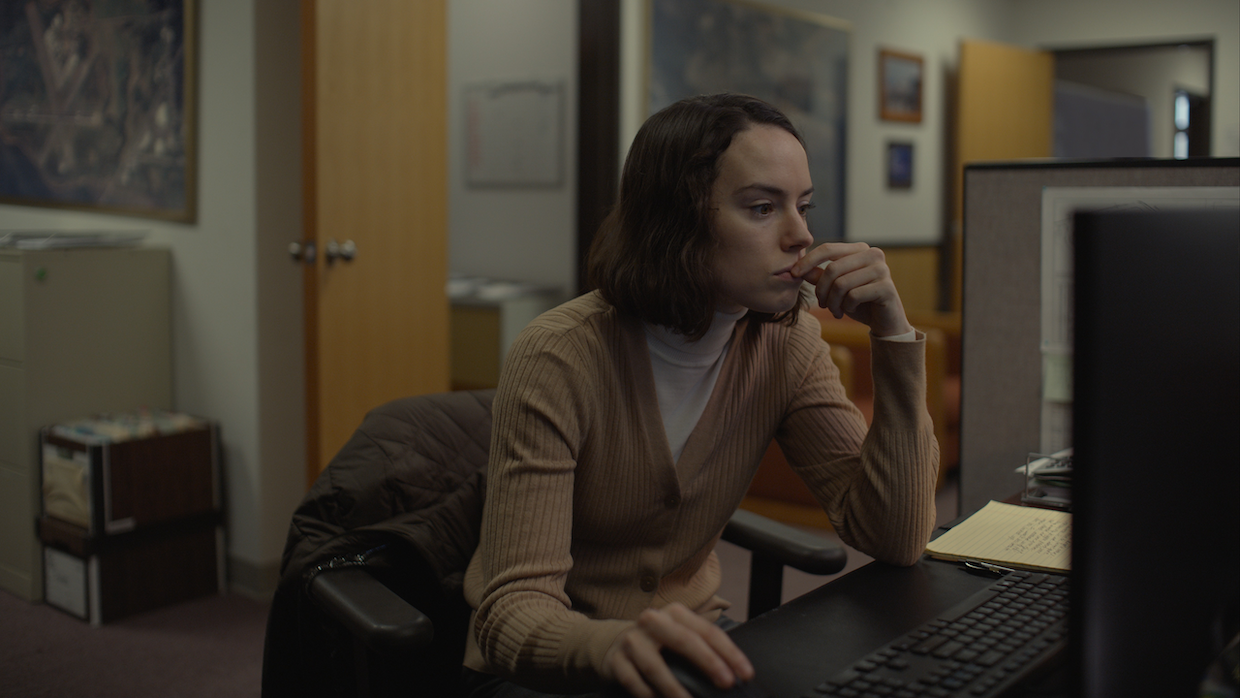 Sometimes I Think About Dying, courtesy of Sundance Institute.

The depressing atmosphere of cubicle culture permeates Sometimes I Think About Dying, Rachel Lambert’s latest directorial effort. At least until a charming new hire begins to break down the defenses of Fran (Daisy Ridley), the film’s protagonist who, yes, often thinks about her own death to kill time.

Editor Ryan Kendrick tells Filmmaker about his previous collaborations with Lambert, how his history as a documentary editor helped on this narrative project and how he broke into the business.

Kendrick: Rachel and I were in the final stages of another film, I Can Feel You Walking, when she was sent a script. We both had such a great time working on Walking that we were excited to work on another project together. After she read the script, she passed it on to me to see how I felt about it. We both really loved it and thought it would be a great film to work on together.

Kendrick: My initial worry upon reading the script, and then as we moved into production, was that I didn’t want to lose the audience by not feeling connected to the thoughts that Fran is having. All of those fears subsided on day one when I started to see dailies and experience the performance that Daisy was giving.

My focus shifted. I wanted to make sure the film felt lived in. Rachel and Dustin spent a couple days before production shooting images around town. Which is the, “Where is she?” But they also shot improv pieces with the cast around the office. Small interactions or full-on improv scenes. Which is the, “Who is she around?” I felt like one of my goals while working on the film was how to incorporate these bits of the world around Fran. I tend to use food metaphors a lot, so to me it was, “Let Rachel, Dustin and Daisy cook, and I’ll just plate the delicious food they’ve made.”

Kendrick: It might seem a bit weird to say, but a major influence on how I was incorporating these moments comes from documentary editing. Rachel and I have worked on a documentary before, and the previous film to this one was entirely improvised. So being able to look at the footage and find the essence of what’s there is not that dissimilar to combing through hours of footage to find the story bit that can bring you forward. But as opposed to documentary, I wasn’t looking for the bits that drive the story. The narrative of that is already being driven. It was about finding the moments that surround Fran and the bits that she absorbs passively in her life.

Kendrick: I started out as an assistant editor in reality television. I was living in New York and working nights as a loader. Which, I’d imagine, doesn’t exist anymore. I did that for a year, while also picking up random shifts prepping for a colorist or doing small edit fixes. I moved to Nashville and searched for any editing work I could find. It’s a small market, so naturally I ended up editing music videos. Over a five or six-year period, I must’ve edited around 60 music videos. Directors of those videos were also working on commercials and films, so they brought me on to work on those projects as well.

Kendrick: I use Adobe Premiere. It’s been my main NLE for years. I’ve used others and feel like they have some good features, but Premiere really gives me everything I want in one place. I like to temp in VFX, so sending a shot to After Effects and having the work already in my timeline is something that I just couldn’t live without.

Kendrick: Temping in VFX on any film is always vital for understanding how the scene is really coming across. The pacing, where the audience’s eyes should be focusing, if we’re leaving enough time for them to see what we want them to see, etc. It was no different on this film. There were a few sequences that I needed to composite, or else I would never know if they were carrying an impact. And there is one sequence, in particular, that I had to do screen replacements and roto, or we were going to be flying in the dark.

Kendrick: It was the opening of the film. We really wanted to make sure that we were giving the audience a sense of what the rest of the film was going to be, which is a difficult task. The film changed and grew as we continued to finesse and define it, so the front would naturally change as we went along. It was one of the final things we locked. Rachel was out of town, so I spent the better part of two days trying different versions. I would get to an edit I liked, I’d upload it to Frame then she would watch it and call me to talk through it. As we made it through a few versions, I started to stray from what the opening was meant to convey and into a territory of, “This feels new and cool.” Once we hit that point, I think we both knew that we had nailed it in an earlier version and that’s where we landed.

Kendrick: It’s not to say that there wasn’t any discovery in the editing room of this film, but I don’t think I have a different understanding or meaning of the film now that it’s over. It’s possible that will change as people begin to see it and share the things that it made them think about. I think that speaks to Rachel and the intentions she had to share this story. I’m not going to say what we want people to feel or how they should perceive the film, but I feel the same about it now as I did on day one.