by Scott Macaulay
in Directing, Directors, Filmmaking, Interviews
on Nov 4, 2010

Starring True Blood‘s Ryan Kwanten, Red Hill is a suspenseful modern-day Western that uses Australia’s dramatic and vast landscapes to stage a drama of frontier justice with an antagonist right out of Halloween-style horror film. Kwanten plays a city cop assigned to a small outback town where he intends to raise a baby with his very pregnant wife. But his move coincides with the escape of Jimmy Conway (Tom E. Lewis) from the local jail. The indigenous Jimmy was wronged years ago, and his brand of frontier justice consists of non-stop mayhem. 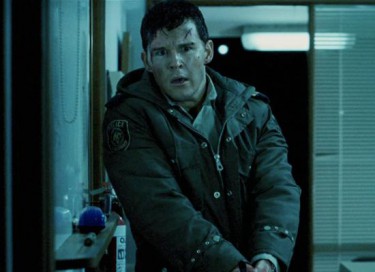 In my conversation with Hughes, he spoke about his film’s lack of resources — its low budget and short shooting schedule. It’s a mark of his talent that these limitations don’t show. Once the film kicks into gear it doesn’t stop, throwing in chases, plenty of gunplay, and lots of blood spilled under the cold Australian moon.

Filmmaker: Tell me about your background. How did you become a filmmaker?

Hughes: I started making shorts as a kid. Some of them did really well, and then I got into film school. I spent three years there, and some of those shorts did a little bit better. And then I wrote a script, a big fat action thriller, optioned it three times, and put it into turnaround three times. I’d never made a [feature], and no one was going to let you make a film [if you hadn’t made one before]. And so I just kept writing and started working in commercials. I shot all around with the world with the best in the business. I wrote more scripts, and each time I made the budgets smaller and smaller. And then I had an epiphany. I wrote down a list of all my favorite filmmakers. Chris Nolan, the Coen Brothers, George Miller — they all made movies by mortgaging their houses. The only way to get your first break is to make it yourself. My friend Greg McLean who made Wolf Creek, he experienced the same frustration. I sat down to write Red Hill [with the idea of] making a film next to no money. It was 11 months from writing script to premiering it in Berlin. Warts-and-all filmmaking. My mentality was, it’s not going to be perfect, I’ll have to compromise the whole way, but I’ll try just tell the story and hope that will prevail. We made the film without a distributor. I thought, if I don’t get into any festivals, if no distributors see it, if no one buys it, I’ll have wasted a year and a lot of money, but that was a risk I was willing to take. I look back and romanticize it now, but I lost 15 kilos from stress. Knowing you can lose your house when you have a mortgage and two kids, well, that’s a good weight loss.

Filmmaker: How did you raise your production financing?

Hughes: Greg told me he would match my [initial] investment, and then I raised the rest privately.

Filmmaker: Was it hard to adjust to making a low-budget feature after working with larger commercial-size budgets?

Hughes: Working in the world of commercials, it’s easy to fall into the trap of thinking you need money. I had to go back to the way I worked in film school. I had to think to think about the resources available to me and be economical and creative. Greg said, what’s your point of vision? Well, western art films weren’t being made. And looking at those landscapes, there is such beauty. It was hard not to bring a sense of scale to the movie with those landscapes. That two-minute opening scene, that was just me and the d.p. with a camera. It’s eerie and creates an ambience that death is about to stalk the town, but we shot it in two hours with two people. I knew by locating the film in country I could do an awful lot for very little money.

Filmmaker: You’ve talked a lot about compromise and shrinking your scale, but you have a lot of difficult and expensive-seeming things in the film. There is a lot of night shooting, a lot of action — did your financier hat ever butt heads with your director hat?

Hughes: I would sit on set saying, who wrote this? Why do we need a rain machine and why are we setting fire to a five-story house? And then me in my director hat would say, this final scene needs to be set at night. Your final act has to have this grand feeling. If you are going to make a first film, you want it to have visual impact, you want it to stand out.

Filmmaker: How do you describe the film’s genre?

Hughes: It’s a mash-up of genres. It’s one part cop drama, one part outlaw revenge story, and then it’s got a sprinkling of romance, a dash of terror, and a good hand of humor. I really wanted to make a film laced with dark humor. You need to release all that tension because it’s horrific what goes down. So, take all those elements and roll them into one big fat Western. Maybe it’s too many things in one.

Filmmaker: It’s also something of a western. Why were you drawn to the western genre?

Hughes: I was drawn early on to the western [genre] because of the moral code. Everyone identifies with it. In Australia we call it “country justice.” At one point do you take justice into your own hands. And if vengeance is justified, that’s powerful for an audience, and the story will have emotional weight. I have kids and wife, so these things are really important to me. You think, what would you do if someone came near your family? Early on, my dad said to me, “you have to watch The Searchers and Red River, but I was too busy watching Star Wars. Then you get older and realize Star Wars is a western. Every western is about righting a wrong. I was drawn to telling a modern-day version. What’s tragic about small country boomtowns is that their glory days are gone. There were 40,000 people in that town in 1890. Now there are 120. They banned logging and shut the sawmill down. In its essence, the film is about the changing of the guard — two men with different moral compasses. Ryan’s character was not set up as a hero. The classic way to tell story would have made him the best city cop, but here it’s the opposite. He’s a city boy with vulnerabilities and innocence and he becomes a man, becomes a cowboy.

Filmmaker: What was the biggest technical challenge when making the film?

Hughes: The biggest technical challenge was time. We shot our movie in four weeks, five-and-half pages a day, and no scene was without a rain machine, or car chase, or people’s heads getting blown off. Jimmy’s face covered in scars — that was three hours of makeup every day. To a certain extent, you have to accept the fact that there will be compromise. Go back to that ‘70s style. I looked at the way George Miller pulled off Mad Max, or the Coen Brothers and Blood Simple. The Coen’s shot their car interiors in their bedroom with the lights off! So when we got stuck in the corner, we just had to find another way to shoot.

Filmmaker: What might an American viewer not know about Australian history that’s important when watching Red Hill?

Hughes: If you look at colonial history of Australia and America’s past, they are not dissimilar. White men pushing out Indians — the same thing happened in Australia. The indigenous people were pushed off their own land, and there were atrocities. If anyone deserves a story of vengeance, it’s the indigenous people of Australia. The character of Jimmy could have just been some guy getting out of prison, but the character needed subtext. I wanted to give Jimmy a mythological status — an angel of death getting vengeance on Australia’s past errors.