by Lauren Wissot
in Directing, Directors, Filmmaking, Interviews
on Oct 21, 2011

It’s been awhile since I sat down to chat with director Jeremiah Zagar, one half of Brooklyn-based Herzliya Films, which he runs with his producer Jeremy Yaches, so I was pretty excited to hear about their latest venture, Starved For Attention. A short film series created at the behest of Doctors Without Borders and VII Photo designed to highlight childhood malnutrition around the world Starved For Attention also seems to be the rarest of public service announcements, doubling as works of cinematic art. I spoke briefly with Zagar as he was preparing for the release of the eighth doc in the series, dealing with the food crisis in Somalia and Northern Kenya. 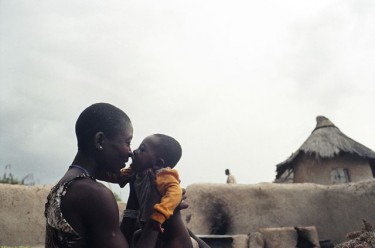 Filmmaker: So how did you get involved with Doctors Without Borders and VII Photo? Can you talk a bit about this Starved For Attention series?

Jeremiah Zagar: Last spring my friend Tim Hetherington let us know that MSF and VII Photo were collaborating on a campaign about malnutrition, and that they needed a production house to take all of the photos and footage and turn them into multimedia short films. My producer, Jeremy Yaches, and I were immediately excited about the prospect of working with such incredible photographers and for such a positive organization so we took the weekend to put a proposal together with our friend, the insanely talented Cassidy Gearheart. Our aim was to create pieces that were fast-paced and moving, that could combine commercial editing techniques with powerful messaging in order to create a different kind of PSA. As it turned out our goal was very much in line with those of MSF & VII so they brought us on and we got to work right away. I’m really proud of what we created, and the campaign has been hugely successful. The goal of the campaign is to raise awareness about the crisis of global childhood malnutrition and to highlight new ways to combat the problem. To date over 120,000 people have signed the petition, and they’re getting more signatures every day.

Filmmaker: Since I’ve already interviewed you both along with the Academy-Award winning team of Born Into Brothels, who you’ve been collaborating with for quite some time, it doesn’t surprise me that you’re still involved in social activist filmmaking. Can you discuss why this type of production – as opposed to, say, indie narrative – appeals to you?

Zagar: I wouldn’t say we’re social activists really. We are filmmakers and storytellers. That said, some stories demand to be told and these are among them. We are in awe of what MSF does, so we loved working on the project. In order to make anything good you have to be in love with it at least a little, so in that way, these films are like any other we make.

Filmmaker: Speaking of collaboration, I noticed that the shorts in the series are “creative directed” by you – and you also serve as editor on several films – but that other artists are involved in the photography and editing. How did you hook up with these folks? Can filmmakers contact you directly to get creatively involved?

Zagar: VII was onboard already to shoot and photograph the films before we were even approached. They, along with the folks at MSF, hired us to take the footage and their incredible photos and turn them into short multimedia documentary films.

It was an extremely tight schedule. They needed seven short films — about an hour’s worth of content — in seven-and-a-half weeks. We knew from the start it wasn’t something one editor could do alone so we brought on two additional editors so that we could be working on three films at a time.

From the very beginning, we reached out to Cassidy Gearhart to help shape our pitch to MSF and VII. Once the job was awarded, Cass not only edited some of the films but he also designed the title and credit sequences. He did the design and most of the animation for In A Dream, but he’s also an editor and director, so he is someone who brings a lot to the table. Galen Summer, our other editor, is someone we’ve known since college. And again, he’s a director as well. We tend to work with people who are pretty self-sufficient.

Also on the team was Whit Hansen, who edited part of “Burkina Faso” and assistant edited the rest of the films, and Yussef Cole, who did the animated maps at the beginning of each film. We’re releasing a new film in the series shortly, and the map for this new one was animated by Jose Fuentes.

Filmmaker: In A Dream is a gorgeous portrait of your street artist father, famous for covering the walls of Philadelphia’s buildings with his stunning mosaics. I know your production company Herzliya Films is based in Brooklyn (I believe in the same space as the IFP offices, actually), but are you still connected with the local film scene in Philly?

Zagar:Along with Cassidy and Galen we have a brand new office in the Carroll Gardens/Columbia Street Waterfront/Red Hook area of Brooklyn. We just moved in last month so we’re not even really sure what neighborhood it’s technically a part of. Either way, it’s awesome. It’s kind of our dream office. It has a backyard and it’s about twice as large as the other potential spaces we were looking at but somehow just as affordable.

We have people we work with in Philly like Blue Cadet, the studio who did the Starved For Attention website and we’d love to shoot a feature there one day. But we do the vast majority of our work here in Brooklyn.

Filmmaker: I’ve always felt that such an intelligent and curious, producer/director duo could easily transition to fiction filmmaking. Is that possibility in the cards or do you see yourselves sticking with docs that attempt to make a difference in the larger world?

Zagar: We have been making fiction shorts for a long time but they often combine documentary techniques. We’re finishing up a crazy short experimental narrative right now called REMAINS that I directed with Nathan Caswell. It’s shot primarily with macro lenses, and it is fiction but uses three years of real recorded voicemails as the backbone of the story. We’re also doing a short new documentary that’s a bit of a secret. The goal for us is just to stay creative and excited about making films. All that being said, one day soon we plan to make the jump into feature narratives.

Kenya “Why Do We Have To Wait For A Crisis?” from Herzliya Films on Vimeo.