Larry Thorpe on the Canon C300

by Michael Murie
in Cinematography, Filmmaking
on Jan 17, 2012

Canon’s Senior Director of Professional Engineering and Solutions, Larry Thorpe, recently spoke at an event at Rule Boston Camera presenting the Canon C300. You can see a video of his talk here: Canon EOS C300 Pub Night with Larry Thorpe on 1.5.11 [Vimeo]

Thorpe joined Canon in 2004. Prior to that, he was a major proponent of, and closely involved with, the evolution and development of High Definition television while at Sony. He is a Life Fellow of SMPTE

I spoke to Mr. Thorpe briefly about the C300 after the event.
The sensor in the C300 is 4:4:4 internally, but it’s going out 4:2:2. Why couldn’t you send out 4:4:4?
Because the processing chip and the codec, the recording codec chip were designed some years ago, we lifted them from a small camera that we have [the XF305], and they were designed to be 4:2:2

The HDMI and the HD-SDI are uncompressed, but they are 4:2:2

The component set is 4:2:2. Compression is something else, that’s the MPEG engine that’s inside the codec. We take the 4:2:2 signal, we compress those components down to 50Mbit, put them on the recording card, but we take that 4:2:2 base-band signal and bring it out on the HD-SDI spigot. 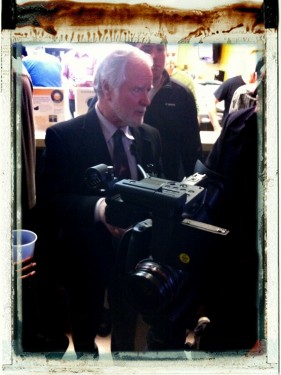 The camera is manual only?
There’s no auto-focus. If you use some of the EF lenses you can do remote focus control because of the electronic communication through the lens, but auto-focus no.

Was this because the DPs you spoke to didn’t want auto-focus?
Yeah, they’re not interested in auto-focus. They’d kill you if you gave them auto-focus.

Can you talk about how you’ve removed the noise?
I can’t talk an awful lot about it other than to say in the photosensor our guys were able to reduce the noise floor very significantly and extend the dynamic range, and that’s what gives this camera this incredible ISO capability.

So not having to de-Bayer the image doesn’t help?
Well that helps. When you don’t de-Bayer you don’t have artifacts, and when you’re turning up gain and you’ve got small artifacts, those artifacts get blown up. The fact that we don’t have them means we’re able to turn the gain up, the signal stays clean – other than the noise starts to rise.

What was your involvement in the development of the camera?
I was part of the team in the US that was researching what was needed, having the meetings with Japan to tell them what we want. Now I’m part of the team that is evangelizing the product.

What’s the general reaction to the camera?
It’s phenomenal. It’s extraordinary. A lot of excitement. And anybody who’s had their hands on it and used it, they get even more excited.

What about it do you think has caused that excitement?
I think it’s the image sensor that is a game changer. It just originates a superb signal, and we don’t have any of the contamination that you have with normal de-Bayering that the other folks have to do. But we’re limited to HD resolutions. We’re not 4K resolutions so, you know, you trade one thing for another.

Do you have any estimates on the comparative sales of the two models; are you going to sell twice as many EF mount as PL mount cameras?
It’s a very big debate inside our house. Our general feeling is there will be more EF, but is it 60/40, 70/30? We don’t know yet, but we do think the EF will dominate.

And it’s going to start shipping when?
January 31st.

In quantity?
Modest initially, you have to ramp up. I don’t have numbers.