by Nick Dawson
in Directing, Directors, Filmmaking, Interviews, Production
on May 7, 2012

Alex Holdridge, Berlin, Fox Searchlight, In Search of a Midnight Kiss, Meet Me in Montenegro 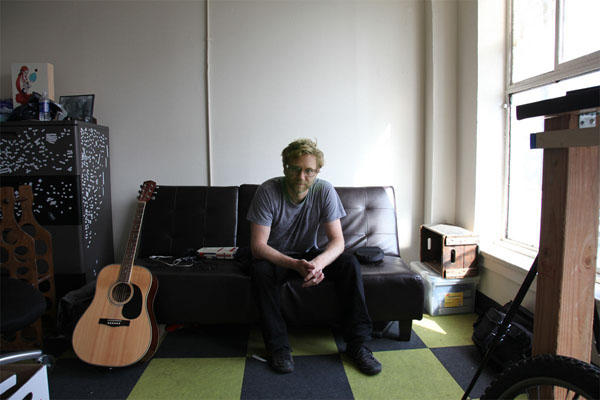 I fell in love with Alex Holdridge’s gorgeous, smart black-and-white LA-set romantic comedy In Search of a Midnight Kiss when I saw it on the film festival circuit in 2007, and later interviewed Holdridge for Filmmaker when Kiss was released theatrically in 2008.

In the intervening years, Holdridge and I were in occasional contact, and through Facebook I was aware that he had left L.A. and decamped to Berlin. But little more than that.

When I read earlier this spring that he was in postproduction on his follow-up feature, Meet Me in Montenegro – a film co-written by and co-starring Holdridge himself and the Norwegian newcomer Linnea Saasen – I dropped him a line to find out more about the film and its genesis.

The following conversation is a composite of our back and forth over email and Skype.

Filmmaker: So, tell me about the new film.

Holdridge: It’s inspired by an exodus from Los Angeles, and a romance that blossomed on a spontaneous trip to the Balkans. We’re putting all we have into it. After I sold a different comedy script to Fox Searchlight last year I took the money and seeded the production for Meet Me in Montenegro after I moved from Los Angeles, traveled through the Balkans and settled in Berlin. A few others pitched in, and that’s how we got the ball rolling.

Filmmaker: And you’re one of the leads?

Holdridge: Yes, I am one of the four main actors, but I’m surrounded by a great group. They are much easier on the eyes than my ugly mug, and they are funny and moving. Rupert Friend is phenomenal, and very funny. Jennifer Ulrich is heartbreakingly good. Linnea is exciting to introduce as writer, dancer and actor in this. There are a few surprise performances in there by some of my favorite actors as well. 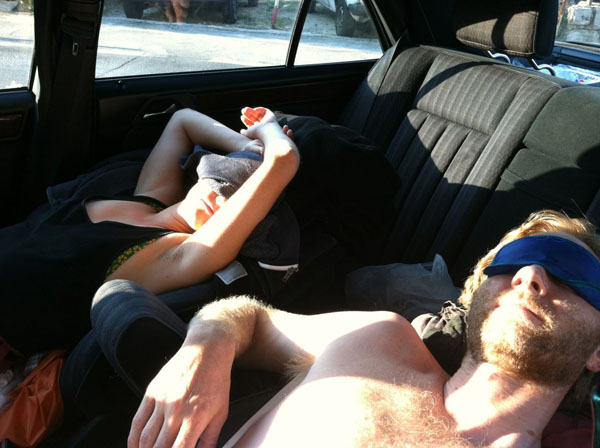 Filmmaker: I think when I interviewed you in 2008 you had a project set up at Fox Searchlight. What happened with that?

Holdridge: They [Fox Searchlight] bought one of my scripts and then I was so frustrated when it fell apart that I just got on a plane to Berlin (laughs) literally not knowing what was gonna happen next. I just kind of fell in love with the city and then I ended up meeting Linnea and having this really great collaboration and romance that developed. So I just completely left L.A., moved to Berlin and then we traveled all through the Balkans and had this really intense experience. And all of a sudden we went back to Berlin, wrote this script and we finally got the ball rolling. It couldn’t be cooler. We’ve given up our places anywhere else in the world. I’m down here [in Montenegro] with Robert, the d.p. and one of my closest friends – he and I are editing along with Linnea and we’re sitting in this little apartment in Montenegro doing our first pass on the edit and we’re waiting for the sun to clear up so we can shoot a couple more shots down here in Montenegro. 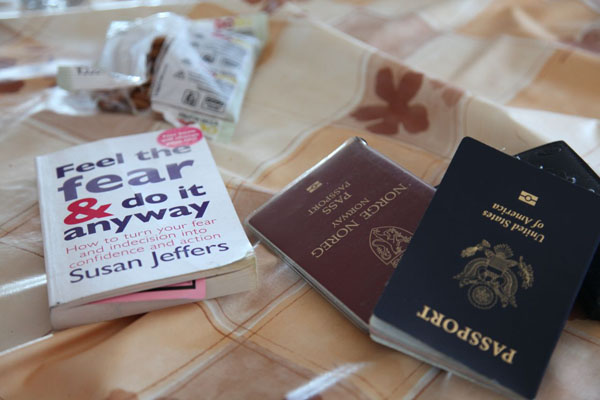 On the road in the Balkans

Filmmaker: I know that getting caught up in waiting for stuff to happen within the studio system can be just so frustrating. The system pulls you in, but it’s not something that is actually fruitful in the end.

Holdridge: Right. My joke is that you get invited up to their apartment, they give you some wine, they slip into something comfortable and then they say they’re tired. They flirt with the idea, but because, from their perspective, their jobs are always at stake, so they’re scared shitless. In general, studio execs have very little margin for error and have to hedge their bets in a way. It’s like if you ran a huge company, you would say, “What’s my best bet? Alright, if I’m taking a chance on some material that’s pushing the boundaries a little bit, it’s probably a safer bet to pick up somebody that has been very successful over the course of the past 30 years.” As the younger filmmakers, you just really don’t get that many bites of the apple in that system and so few chances are taken. In a back-handed way, the studio kind of funded this, because I had been broke my whole life and they bought a script and like, “Fantastic. Fuck it. Let’s make a movie.” But in a way, it gives you so much freedom because now you don’t have to have any kind of discussions about whom you want to cast or the cost of things. You just go out and do it. With these DSLRs in particular, you have access to anything on the planet and so you can get into places and locations and situations that would be extremely costly if a studio were involved. In that way, from a creative standpoint it’s really liberating.

Filmmaker: Not having to run everything by people and only having to please yourself or the people you’re collaborating with – that sounds a lot more fun.

Holdridge: It is a lot more fun. We’re assembling right now. We’re done with principal photography. We have a little bit more to shoot in Montenegro so we’re basically gonna stay here till June 30th finishing an assembly and doing a few additional pick ups and that’s kind of where we are. There’s one other scene, which I’m kind of waiting on. There’s a few kind of surprise moments that I’m just kind of waiting on someone’s schedule until I can fly to London for the day and shoot one more scene. Beyond that, we’re just assembling the footage. 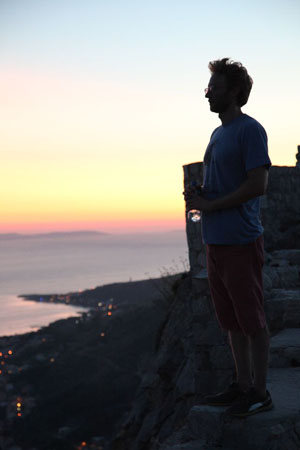 Alex Holdridge on the set of Meet Me In Montenegro

Filmmaker: Is this a model you think you can repeat? Is this what you’re planning to do going forward?

Holdridge: Yeah. I think that this is really hard to beat because now we have such a good team – on the producing end, on the d.p. end, on the post end. We have this really tight crew. It evolved over the course of the shooting but once we found it, boy oh boy, it’s really hard to beat creatively in terms of the things you can capture, the places you can capture – you can do things with these tiny light-weight cameras and now they’re even having a 4K camera. I think that the studios will be a really successful place at distributing these kinds of films. [People at companies like Fox Searchlight] are film lovers and so when they see something like this and they go, “Oh god. I love Rupert Friend and I love that we have this international cast.” So on a production end, we’re just worried about making the movie good and getting people that feel right for the parts and really good and hopefully it’ll work out in terms of the distribution. We’ll see. 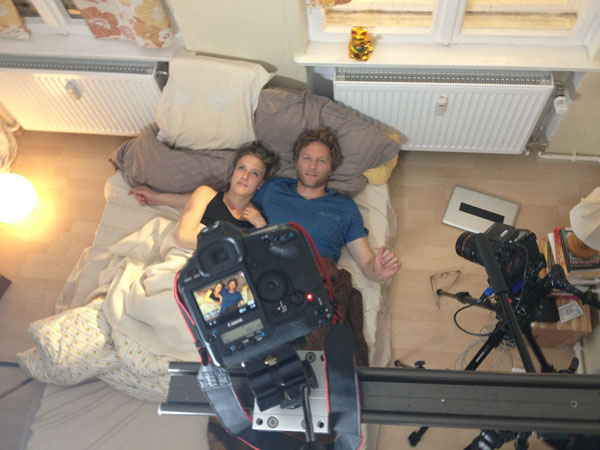 Filmmaker: So are you planning to go back to Berlin once you’re done in Montenegro, or is that up in the air?

Holdridge: Yeah, right now I have a two-year artist visa in Berlin so I can go back. We’ll probably end up going back there but really the world is wide open right now. We’ll definitely not go back to the States, I can tell you that. So it’s probably Berlin and then we’ll see. If I ever went back to the states with Linnea, we’d go to New York.  I’ll never go to Los Angeles again.

Filmmaker: That sounds like a smart decision to stay away.

Holdridge: Yeah, I’m done. It was enjoyable but Berlin is much more inspiring and it’s in a live place and it’s a place where people are not obsessed with . . . they’re not on their iPhone all the time. It’s like, my God, an iPhone is almost looked down upon because it’s too materialistic. I think that’s culturally more interesting, inspiring and people are producing things because it’s of interest to them. They’re pushing themselves creatively in ways that have nothing to do with finances. It’s just so much more inspiring to be in that world. Just to be in a place where people talk about box office is just like, “Who gives a fuck?” (Laughs) It’s not to make esoteric things but Jesus Christ, Los Angeles is a very unhealthy world to be functioning in.

Filmmaker: Well, it sounds like you’re in a really great place literally and figuratively right now. 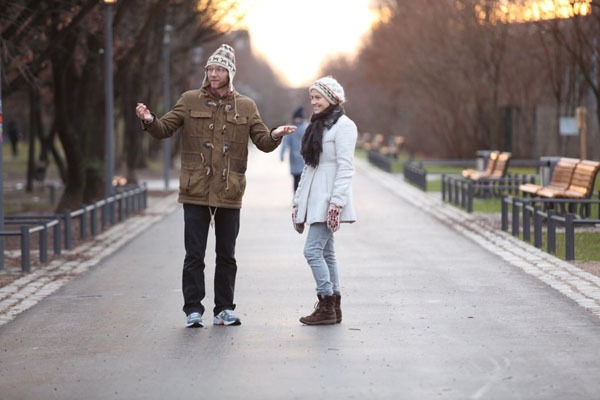 Holdridge and Saasen while filming Meet Me In Montenegro