by Sam Eisen
in Directing, Directors, Filmmaking, Interviews
on Jun 14, 2012 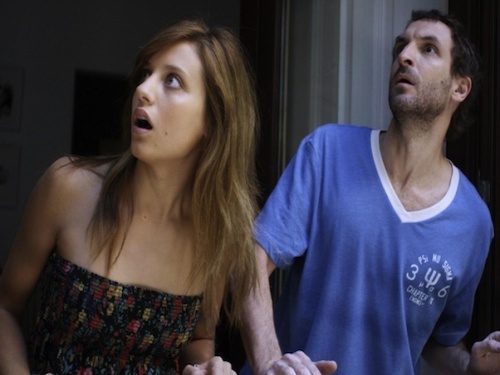 If a massive UFO descended upon the city you lived in, what would you do? Would you cower in fear, waiting for rescue? Or would you rally a ragtag band of resistance fighters to confront this encounter of the third kind? Or maybe you would do nothing, waiting for the aliens to make the first move and inviting a cosmic game of chess with the fate of Earth at stake. Nacho Vigalondo offers his own answer to this question in his latest film, Extraterrestrial, a romantic comedy/science fiction synthesis about a love triangle struggling to resolve itself in the wake of an alien invasion. It is not global problems that rise to the forefront in Vigalondo’s excellent second feature, but the more intimate, everyday issue of how to trust, a dilemma made even more difficult by post-invasion paranoia.

Sweet and funny in equal measure, Extraterrestrial represents a daring mashup of two seemingly incompatible genres. Vigalondo delights in subverting the tropes of both genres; the reason Julio (Julian Villagran) and Julia (Michelle Jenner) remain behind in the alien-occupied city is that the pair were so hung over that they slept through a government evacuation. The film succeeds on the strength of an engaging set of characters whose desires and fears remain achingly human even in the face of the nonhuman forces acting upon them.

Extraterrestrial plays at the reRun Gastropub Theater from Friday June 15 and will be simultaneously available through Video on Demand. 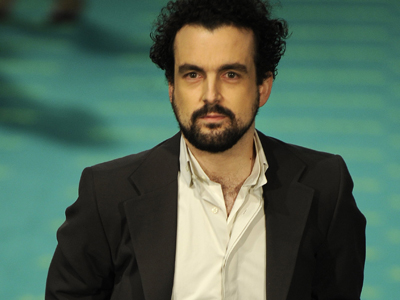 Filmmaker: How did the idea for Extraterrestrial come about?

Vigalondo: I try to understand every starting point in a movie as a game. This may sound childish, but what if we took a general scenario like the alien invasion, and paid attention to the people who weren’t involved with the fight against the aliens? In other words, most of the people. I love to make this joke when I’m introducing the film; I talk about the 99 percent. What about the 99% of people who would just be waiting for things to happen? Most of us won’t even run away when something much bigger than we can understand happens, because it’s everywhere. Maybe the best thing to do is just to wait. I wanted to see what happens to these characters when the alien invasion comes, and the social rules disappear. I find now that what happens is the everyday: the everyday desires, the everyday anxieties, and the everyday frustrations.

Filmmaker: In a way, your film reminded me of a movie like Signs, where all the characters are stuck in a house and the action is not necessarily focused on the aliens themselves. Did you find you were inspired by movies with that approach or other science fiction in general?

Vigalondo: One of the films I had in mind when writing this was Cloverfield. At the time, Cloverfield was in theaters, and I really love that in that film, as a human being, you are just there. Even if you are a victim of the disaster, the disaster in Cloverfield being a big monster, the fact is the monster doesn’t care about you. In fact, he doesn’t even know he’s killed you because you are so infinitesimal. I love that in Cloverfield you have this love story that somehow gets solved, but the big story doesn’t get solved at all, because the character disappears before the big disaster comes to a conclusion.

Filmmaker: Do you enjoy a lot of modern science fiction movies? Because it seems this film tones down the excesses of those movies.

Vigalondo: I would never make this movie as a commentary on other invasion films. I love invasion films; I never wanted to make a movie about the “right” way to do a certain kind of film. In fact, I think that this is a different film, because it’s a pure science fiction film. Some people would say, because Extraterrestrial never shows the aliens, I’ve made a film that’s not true science fiction. But it’s not only about the UFO, it’s about the tools I’m giving the characters to lie to each other. I need the characters to act in these terms to make the movie work. The characters are wondering constantly about who the extraterrestrial is. For me, that’s pure science fiction. This movie could be a sequel to Invasion of the Body Snatchers, except of course in Body Snatchers there really were aliens! But I like to think this film could happen in the Body Snatchers universe because the characters think the aliens are replacing us and are now trying to take advantage of that situation.

Filmmaker: And the isolation the film takes place in really allows that to happen. In terms of the setting of the film, did you find it difficult to make a movie where the characters were confined to this one relatively small space?

Vigalondo: Actually, I love to keep movies confined. I can’t explain why, but I love the energy a movie delivers when it is happening in a limited amount of time and a confined location. Movies like Reservoir Dogs and even later Tarantino films really inspired me; those films took place in relatively few locations and have a great energy. Maybe it’s an aesthetic thing. Also, when you are shooting constantly in the same place, that place becomes so familiar to the shooting crew, it’s like your home. All the flat sequences were shot in three intense weeks and we were really sad when we had to leave the place because it became home for all of us. It’s a real flat, not a set, so it was especially homey.

Filmmaker: One thing I really enjoyed about the movie is it has these dynamic characters. I don’t want to say it’s like a romantic comedy because I feel like there’s a stigma there, but it’s got that similar love triangle. But you root for all the characters. There’s no one designated character to root for.

Vigalondo: I respect all the characters. I will never let the nasty character just be nasty or the sweet character just be sweet because I don’t think that’s how real life works. I love when a bad character has the chance to be loved by the audience and I love when a good character has the chance to be hated. I think that puts the movie closer to real human nature. But I want go back to what you said about romantic comedy being kind of a stigma; I understand what you’re saying, but only if you focus on contemporary ways of filmmaking. If you go back to the classics, like Billy Wilder and Howard Hawks, romantic comedy isn’t something you want to avoid, it’s something you want to work with. In fact, I was really aware of shooting a screwball comedy. But instead of letting people talk in a really agile and neat way, like in Howard Hawks’ films, I wanted to apply modern comedy strategies to old comedy structures. I wanted the characters to be awkward and uncomfortable in the way you see in The Office, or the Larry David show Curb Your Enthusiasm, which for me are the modern comedies of the present because they are filled with these uncomfortable feelings and moments. I’m not against romantic comedy, it’s another tool.

Filmmaker: Did you ever play around with different ways to start the film? Because the ambiguity of the beginning is really striking.

Vigalondo: Extraterrestrial first originated as a short film before I wrote the feature-length draft, and the first sequence I wrote was a scene for the night before [the invasion]. When it came time to shoot, I decided not to do it because of the reason you said: the ambiguity at the beginning is so attractive and makes sense in the context of the whole film. It’s not only pure ambiguity, it also puts the audience very close to the character’s perception. If the characters don’t remember what happened the night before, neither does the audience. As a filmmaker, I wanted to push myself into shooting this mute sequence at the beginning. I was going for something Hitchcockian, where the action is all shown from the perspective of the character. It’s like Rear Window in that way, we only see what he sees. This really allows you to get close to the characters. That ambiguity also means the film doesn’t reveal itself right away. Even though in many ways it is a romantic comedy, you don’t know this at the beginning. Is it a suspense film, is it a horror film? I love to be ambiguous not only in the sense of what I’m showing and hiding, but also in the tone. If you think the movie is a comedy, I love to work the horror aspect, if the scene will allow me to do that.

Filmmaker: Do you enjoy playing with audience expectations?

Vigalondo: I think that a true filmmaker understands audience expectation as one of the greatest toys you can play with. It can be tenuous because many people don’t want to be challenged in this way, and some people say, “I was expecting this movie to go in this direction, and you go into another, and that annoys me.” But for me, as an audience, I love to be manipulated. I love to feel in some way disoriented or disconcerted — I think that’s a positive. When you go to the movies knowing what to expect you can get bored sometimes, so playing with expectations can keep things interesting. For me, I have to feel that a movie can play with audience expectations, but that there’s also a meaningful reason at the end of it. To manipulate the audience is great, but it’s a bonus. If the film works, it’s because of something else. That’s a big toy, but it’s not the only one.