by Jason Guerrasio
in Directing, Directors, Filmmaking, Interviews
on Mar 12, 2009

A graduate of Bard College, filmmaker Tony Stone’s first feature, Severed Ways: The Norse Discovery of America, unleashes an almost-new genre – the indie historical drama. It might also be the ultimate heavy metal video. Based on historical research, Severed Ways follows two Vikings stranded in medieval America, encountering both Native Americans and monks, everyone trying to survive. It is deeper than an action film as the Vikings are complete characters, violent but missing their girlfriends. In a way, Old Joy with Vikings. 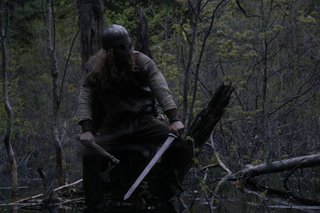 Shot on mini-DV, the result is stunning, a period piece that looks like a painting but feels like an inside view with characters even speaking in Norse language.

FILMMAKER: Did you start the film while at Bard?

STONE: No, it was after with a lot of Bard friends. I did a variety of stuff at school. I tried to do a feature that ended up being three shorts for my senior project. The program was avant-garde/experimental for the most part. I was one of the few people who would do narrative. But that was great because there were no rules. Everybody was doing different stuff, which was great to be around.

FILMMAKER: And the teachers were supportive? All are great filmmakers themselves.

STONE: Definitely. The more rules you broke the better you were. They liked ambition. Anything that looked like you worked hard they were into. The teachers are big avant-garde names but they also grew up on classic film in a way. And they were making films in the groundbreaking era of the ’60s and ’70s.

FILMMAKER: Of course, when you say you were making narratives, you didn’t make a film about singles in Manhattan.

STONE: I strayed as far from that as possible. Growing up in New York, seeing the way the city is used as a backdrop in the media, from MTV to the news and films, it’s such a sterile place, a commercial backdrop with no texture anymore. It’s boring to film in, a default backdrop for American corporate culture, basically. Getting the woods in Vermont, a wide landscape is what I was looking for.

FILMMAKER: Did you have the story and then find the woods?

STONE: Both. I spent a third of the year in Vermont because my Dad moved out there as a hippie in 1969 completely off the grid — no electricity or phone lines. No road in. It’s an upgraded farm with solar panels and a well. I grew up living in that location, so I knew it inside and out. I knew what each spot looked like at during different times of the day.

I wanted to put a film there – you figure out what’s already at your fingertips that you can use. Vikings were something I was into as a kid. But I’ve also always been into American history and that episode of it is so ignored and forgotten. It’s a whole chapter of America that is so open-ended and not known about. There was never a film about it. Taking that on and wanting to visualize it was interesting to me. I got to learn more about it. This chapter of Norse exploration has them interacting with the Native American pagan population — the Vikings were semi-Pagan at the time, slowly converting to Christianity. It’s amazing how close the Norse actually came to settling America and how different this country would have been had they stayed and not retreated. It shows how fragile history is. The landscape of this country, the faces of the people…. It would have been night and day. The possibility of what could have been 500 years before Columbus, settled more gradually…. Indian and Norsemen were technologically equal, instead of 500 years later with Christian vigor carrying guns.

FILMMAKER: Trying to describe this to friends, I ended up at Old Joy with Vikings.

FILMMAKER: But it’s infused with the look of a 1970s saturated drama.

STONE: Those are definitely the films that influenced it. Sometimes I have trouble describing it. I often call it a “heavy-metal nature Viking film.” In terms of cross-referencing, which I don’t do too much, I think of Barry Lyndon, Aguirre and Quest for Fire together.

FILMMAKER: It feels incredibly real. How much research did you do, compared to just writing a story?

STONE: The opening quote is from the Vinland Sagas, another forgotten part of the American conquest. The myths and sagas about the exploration are incredibly accurate. That’s how they discovered the Norse ruins in Newfoundland – by sailing a replication of the ship described in the sagas, they ended up in this location and found a Norse settlement that had been built.

I met with serious reenactment actors, and that was one of the most educational things. Seeing how practical the Vikings were, it was amazing. They were such skilled carpenters. What they could accomplish with such primitive tools, from the technology of their boats to their houses which are beautiful and simple. That helped with what we had, which was the land in Vermont. Using your surroundings, from milling your own wood to shitting in the woods, the way the character does in the film. Take a film crew and put them there, and everyone is living like the characters.

FILMMAKER: How did those discussions go when hiring crews?

STONE: [laughs] Everyone was up for it. We shot it over two different falls, and we were dependent on the weather day to day. The mist in the woods and the way the sun hit the river at a time would all dictate the shooting schedule. Everybody was focused on this one task. Nobody going home at night and watching TV or doing emails, there was nothing else. Like a think tank up there.

I initially thought I could shoot the whole thing in two weeks, which of course I was completely wrong about. We shot only about a fifth of it the first year. After going through that footage and understanding where it needed to go, it ended up being four times as long a shoot, plus we went to Canada, to Newfoundland, to Maine and to Vermont for another six weeks.

Going to Newfoundland was a pilgrimage to that Norse settlement I mentioned for the flashbacks in the film. We were tromping around where the Vikings actually were, and the energy from that was pretty incredible. To physically see where they set foot and why they picked the spot they did. Fifty miles across from Newfoundland you could see Labrador. It was the gateway to Saint Lawrence, there was this amazing cove, and the buildings were so beautiful.

FILMMAKER: How long did you live in the forest home?

STONE: Full summers and weekends. Total escape from New York. I grew up in New York but that contrast has always been a part of me. In a way Severed Ways has that intense clash of the music over the intense nature. To drive four hours north and tromp around the woods then come back to lower Manhattan, it has a profound effect on a kid.

FILMMAKER: Maybe because we grew up in the ’80s, so of course metal music equals Vikings. But did you ever worry about the clash with the story’s timeline?

STONE: I think there are ideas in the music that come through and reinforce the images. A piece of classical score over Vikings pillaging, there is no connection. Basically there is a subtext in all that music. With black metal, people were listening to it and burning down churches the same way their ancestors were a thousand years ago. The music is loaded, and acoustically it makes sense. It’s triumphant. It is used to reinforce the characters belief systems. The battle cry, the fearlessness. But as the Vikings’ friendship dissolves away and the Christianity comes then the music changes too. The tonalities and sentimentality of the Brian Eno theme works as a heathen to Christianity conversion theme. The prog rock of Popul Vuh, which is very beautiful and psychedelic, represented as the Native American, and very pure, Pagan earth sides of things entering the frey.

FILMMAKER: How hard was Norse to learn?

One of the main goals of the film is to bridge the past and the present, to not look at history as this distant thing that we are not in touch with. From the subtitles and the vernacular of the characters, to the music to the mannerism, [we are] trying to modernize the period piece and make it more familiar instead of the usual staleness found in these types of films.